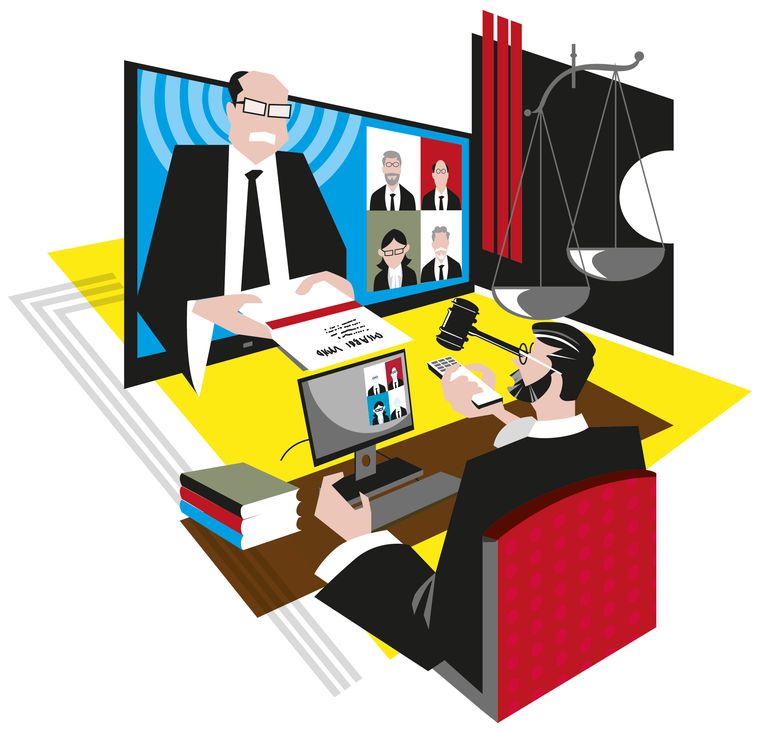 DURING THE SUPREME Court’s hearing via videoconferencing on April 13, Justice D.Y. Chandrachud engaged with lawyers on its viability. Advocate-on-Record A.D.N. Rao said the new system had resolved the problem of travel and led to a reduction in pollution; he quipped that he hoped the restrictions would stay in place until July at least. Chandrachud said he had seen so many stars in Delhi’s night sky for the first time. “I had a flock of peacocks in the garden in front of the house. It is all a touching experience,” he said. The positive impact on nature aside, the lockdown has coaxed the judiciary into embracing technology.

On March 27, for the first time ever, three benches of the Supreme Court assembled in the residential offices of the judges to hear matters through videoconferencing. It marked the beginning of a new experience with ramifications for the near future and the promise of greater digitisation of the judicial system in the long run.

Various courts, tribunals and jails have been moving towards going online. It is, however, a first for the higher echelons of the judiciary to adopt the online mode to hear urgent matters. ‘Work from home’ and ‘work from chamber’ is the new normal for judges and lawyers. If judges are hearing cases from their home offices, lawyers are logging in from their homes or chambers. While the Supreme Court is using the Vidyo app developed by the National Informatics Centre, the high courts are using Vidyo, Zoom, Skype and Microsoft Teams. An electronic system has been put in place for filing petitions, while mentioning of matters is taking place through emails or even phone calls made to judges. But the facility is limited only to urgent matters.

Experts say it is commendable that the judiciary is using technology during the lockdown since justice is an essential service. “They have to be congratulated for rising to the occasion and bringing in these changes,” said Surya Prakash B.S., programme director of Daksh, a civil society group.

The present system is, however, marred by glitches and there are concerns about its effectiveness. Recently, as the apex court was hearing the suo motu petition regarding overcrowding of prisons, the line got disconnected, forcing the judges to complete the hearing through a WhatsApp video call. There are doubts whether the hearings are safe and as inclusive as the traditional open court. Experts feel that the courts would have done much better had the work on creating an electronically-enabled judiciary been on track. 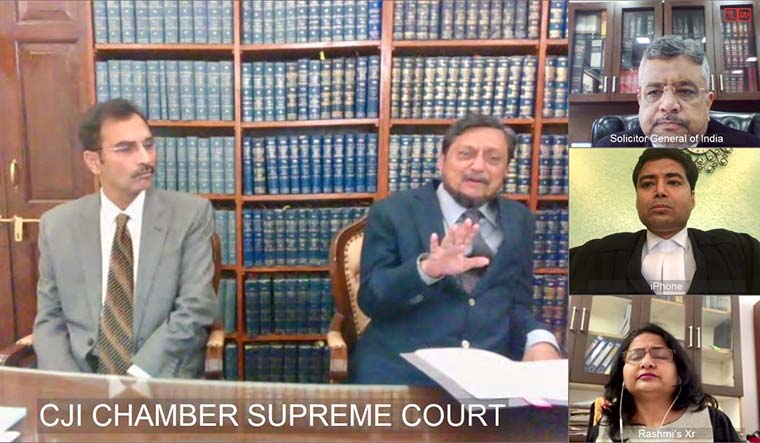 New age justice: The Supreme Court is using the Vidyo app developed by the National Informatics Centre for videoconference hearing of cases.

“The IT platform should be so enabled that even during a hearing if you want to hand over some papers or documents or rely on some decision of a court, you should be able to transmit that electronically in real time,” said advocate Lokenath Chatterjee, who practices at the Calcutta High Court. “We need an indigenously developed secure system in view of the security problems involved. A heavy duty internet connection is most important.”

For the system to be truly online, an automated mechanism for filing of petitions is required. At present, lawyers send their request for videoconferencing along with the necessary documents to an email address designated for the purpose. “The online system was launched with a lot of fanfare, and it was said that e-filing will happen. But what is happening is that petitions that were earlier submitted to the court across the counter are now being sent on email. The system is cumbersome, layered and not at all user-friendly,” said K. Diwakar, former legal adviser to the Karnataka government.

Advocate Fuzail Ayyubi, one of the first lawyers to appear before the Supreme Court through videoconferencing, said people were getting used to the new system. “There are new challenges and glitches. The clerks are used to a paper-based system. So new kinds of problems have arisen,” he said.

Technical glitches apart, the courts have to come to terms with the need to observe proper decorum in online hearings. There is the shocking instance of a lawyer appearing for an online hearing before the Rajasthan High Court wearing ‘baniyan’ (vest). A furious court adjourned the hearing, saying it has already observed that even during videoconferencing, the decorum of the court has to be maintained. It was the second such incident in the Rajasthan High Court.

Lawyers say the proceedings should be in the open court format, wherever the nature of the case allows it, and especially in cases involving larger public interest or questions of law. The Supreme Court has not opened up its hearings for the public. The proceedings in some of the courts, for example the Kerala High Court and the Bombay High Court, are being conducted through Zoom and are open to the public.

“At least for larger constitutional matters or cases which involve a public cause or an issue of national interest, live public streaming can be made available,” said Advocate-on-Record Alakh Alok Srivastava.

An e-committee of the Supreme Court headed by Justice Chandrachud has come out with a standard operating procedure for advocates and parties. A new software to facilitate round-the-clock e-filing of documents is being tested. These initiatives are seen as preparatory steps for the coming months when the courts will have to continue observing social distancing norms while moving on to a more extensive hearing regimen.

“I don’t think that immediately on termination of the lockdown, the courts are going to function normally. The Patna High Court has around 6,000-7,000 counsels, all courtrooms and corridors are packed. Videoconferencing is going to continue for some more months,” said Lalit Kishore, advocate general of Bihar. The Patna High Court, which was the first to hear matters through videoconferencing on March 19, has two courts hearing matters at present; efforts are being made to link at least five courts.

“Videoconferencing is here to stay and there are several advantages to it,” said Vikas Singh, senior advocate and former additional solicitor general. Singh, who was the first lawyer to appear through videoconferencing before the Supreme Court, has made an intervention application before the top court about online hearings, asking them to be made a routine feature in the long run.

Singh said the Supreme Court Rules should be amended urgently to provide for compulsory videoconference hearing of certain types of matters and voluntary hearing for others so as to ensure social distancing and to deal with the problem of overcrowding.

He has suggested that bail pleas, transfer petitions, matrimonial matters, service matters involving a single employee, matters of petitioners-in-person, except for PILs and chamber matters can be heard compulsorily through videoconferencing.

Experts feel that the advantages of videoconferencing include bringing greater professionalism into the proceedings, since the submissions have to be succinct and to-the-point, enabling remote participation, ensuring the speedy disposal of cases where the decision is largely based on written submissions, and saving time and effort for litigants and witnesses who are out of station.

“The current experience will ensure that naysayers can be overruled easily,” said Surya Prakash. “There is a mindset change and the judiciary needs to use this occasion to channel all its energy towards digitisation.”