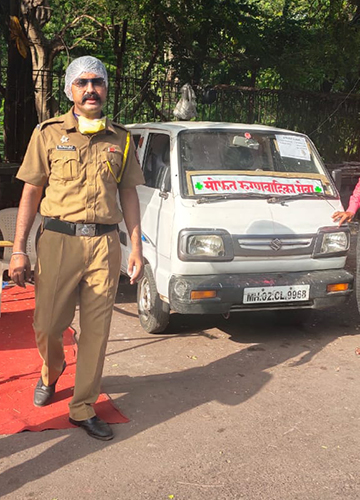 In May, Tejesh Sonawane, a police constable in Mumbai, was informed about a pregnant woman in need of urgent help. She was standing outside Mumbai's famous Backbay Depot, desperately trying to get to the nearby Cama Hospital. But, the lockdown was in full force and she was unable to find a cab. Sonawane, who was on duty at the nearby Cuffe Parade police station, borrowed a Maruti Omni from a friend and rushed her to the hospital. Over the next three to four months, he did more than 40 such trips in two 'Omni-ambulances', ferrying patients across the city to nearby hospitals for free.

“It really came from the heart,” Sonawane told THE WEEK over the phone. “I could not bear to see vulnerable people being helpless in the face of a lockdown. All I needed was a car and I was overwhelmed when so many of my friends offered to lend me one.”

Mumbai Police shared his story on Twitter in a video which showed his journey as the “Omni-Present Covid Warrior”. “Health care workers come in all get-ups. Some wear aprons; while others, khaki—just like PC Tejesh Sonawane from Cuffe Parade PStn,” read the tweet, alongside the hashtag #AamhiDutyVarAahot (#WeAreOnDuty).

Sonawane said he has never felt so proud of himself and his fraternity in his 13 years of service as he did during the lockdown when the entire force “went out of its way” to help citizens. “I ferried pregnant women, Covid-19 patients and whoever wanted a vehicle to access emergency medical services,” he said. “I would do this after duty, but, at times, even during duty hours thanks to the support of my colleagues and seniors. Then DCP Sangram Singh Nishandar and senior police inspector [Rajkumar] Dongre supported with PPE kits and sanitisers.”

Sonawane would drive, help the patient into the van and thereafter onto a stretcher, all by himself. To transform the van into an ambulance, he partitioned it into Covid and non-Covid sections and refurbished it as it had not been in use for well over a year. But, all this was done at no cost. “Nobody charged me for anything as it was for a noble cause,” he said. “After the first van broke down, we got another one readied for ferrying patients. Both times, I got all services for free.”

But the fear of contracting the virus was always at the back of his mind. He sent both his daughters, aged six and eight, to his ancestral village in Nandurbar district. “I actually asked my wife to leave as well, but she wouldn't,” he said, laughing. Fortunately, he did not test positive for the virus. Sonawane is enjoying the attention he is receiving from his colleagues, including the DCP who rewarded him with Rs5,000. But he is not new to fame and recognition.

In 2016, he was awarded the Jeevan Raksha Padak for climbing the water pipe of a six-storeyed building to stop a middle-aged man from attempting suicide. Sonawane continues to look forward to opportunities to serve the people.