Gift of the jab

India set to face diverse challenges regarding the coronavirus vaccine 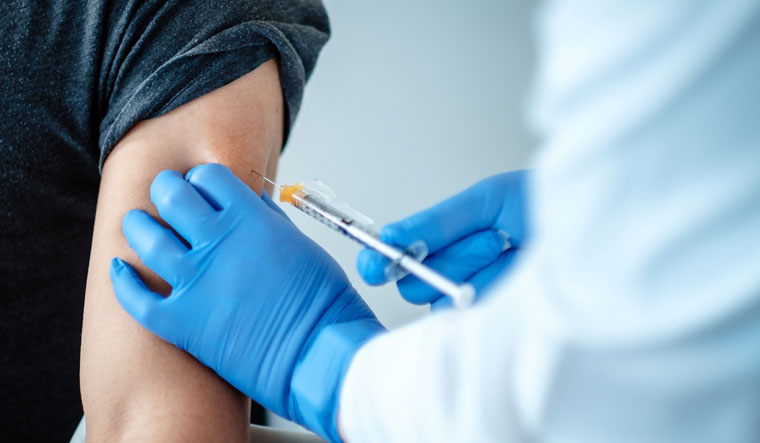 Locked and loaded: An undated handout of a dose of the Pfizer-BioNTech vaccine being administered | REUTERS

If 2020 started on a gloomy note on account of the threat of Covid-19, the year is closing on a hopeful one. On December 2, the world’s first vaccine against Covid-19, developed by American pharma giant Pfizer and German company BioNTech, received emergency authorisation in the UK, setting the stage for its immediate rollout.

The vaccine uses the mRNA technology platform and is reported to have 95 per cent efficacy in phase-III trials, but it faces significant distribution challenges. It must be stored at minus 70 degrees Celsius, a temperature for which India’s cold chain network is not ready. Pfizer said the vaccine would be transported in thermal shippers using dry ice to maintain the required temperature. These can be used as temporary storage units for 15 days by topping up the dry ice. The company has set the initial price of the vaccine at $39 for the two-dose regimen.

As initial doses of the vaccine are pre-booked by countries such as the US and the UK, India is unlikely to get it soon. “Our doors are open for these vaccines, should the need and the possibilities arise,” said Dr Vinod K. Paul, chairman of the National Expert Group on Vaccine Administration for Covid-19, in a recent conversation with public health experts.

Next in line before the UK regulator is the Oxford-AstraZeneca vaccine, which is cheaper and more temperature stable (requiring temperatures between 2 degrees Celsius and 8 degrees Celsius). Paul said the most promising candidate at the moment for India was Oxford’s India vaccine, Covishield, which is being tested by the Serum Institute of India (SII). Full results of the phase-III trials of the vaccine are expected by late January or early February. However, once the UK regulator gives an emergency approval for the Oxford vaccine, India, too, could consider an early approval. SII chief Adar Poonawalla said the company would approach the drug regulator to obtain restricted use authorisation, as opposed to a full authorisation, setting in motion what could be the world’s largest vaccination programme.

Prime Minister Narendra Modi had initially said all Indians would receive the vaccine. But on December 1, Union Health Secretary Rajesh Bhushan clarified that the government had “never said” that the entire country would be vaccinated. A critical mass of India’s population would be considered to break the chain of transmission, said Dr Balram Bhargava, director general of the Indian Council of Medical Research. For now, that critical mass is pegged at around a priority population of 25-30 crore, who would get the shot by July 2021. But it is not going to be an easy exercise.

“India has vast experience in immunisation on a large scale. But that is for children less than a year old. Here, we are targeting adults. Despite our experience of implementing large public health programmes, this might just prove to be a logistical nightmare,” said Dr Ajay Khera, former commissioner, maternal and child health, Union health ministry. “Some very unique challenges will present themselves once the rollout begins, though I understand that the government is making all the right preparations.” 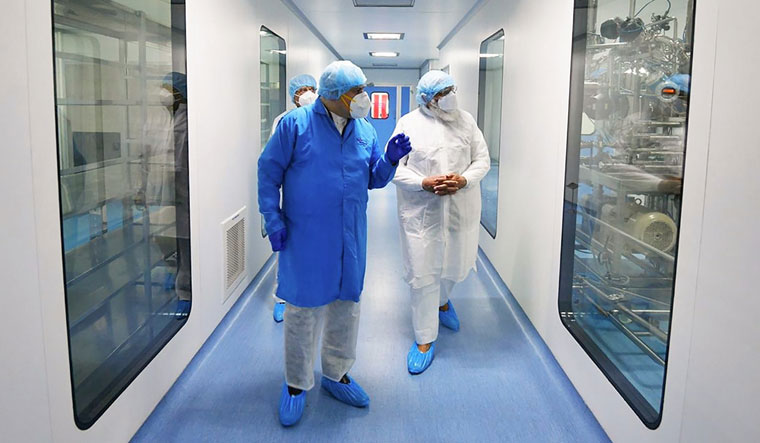 Personal supervision: Prime Minister Narendra Modi (right) being briefed on the progress of Covaxin, at the Bharat Biotech facility in Hyderabad | PTI

Paul said in the initial period, the supply of vaccines would not be enough. Eventually though, supply will surpass demand, but the critical period is that of the initial months. The situation is dynamic—experts are still factoring in several uncertainties in their planning, such as at what stage would the pandemic be after a few months, whether the vaccines would work and which among them would be better, Paul added.

To deal with limited supplies, the process of shortlisting the priority groups has begun. The government is looking at one crore health care professionals such as doctors, MBBS students, nurses and ASHA workers; about two crore frontline workers including municipal workers, police and armed forces personnel and about 26 crore people above 50. A few under 50, but with comorbidities, are also being considered.

India’s initial list of vaccinators stands at 70,000 health care professionals. The Centre has asked the states to identify potential vaccinators from a pool of MBBS/BDS doctors and interns, staff nurses, auxiliary nurse midwives and pharmacists.

Even within the priority group to be vaccinated, there might be challenges, beginning with who gets which vaccine, since there are multiple options. “India does have the experience of administering multiple vaccines,” said Dr Gagandeep Kang, vaccine scientist and professor, Christian Medical College, Vellore. “For instance, in rotavirus vaccines we have Rotasiil and Rotavac. We will need to build on that.” India will also be drawing upon the experience of conducting the world’s largest measles-rubella vaccination campaign in which 450 million children were vaccinated in three years, she said.

Despite the ambitious targets, the government has not yet made any formal advance purchase agreements. “It would have been reassuring if we had some [agreements]. But perhaps the thinking is that once a vaccine is proven to be safe and effective, only then will the government be purchasing that vaccine rather than take a risk on unproven products,” said Kang. She said the existing immunisation programme and infrastructure were good and should be fully utilised. “Key decisions such as at what point should the private sector be involved would also need to be made, given the scale of the programme,” she said.

Preparing for logistics and infrastructure is another major challenge. A strong digital backbone of the rollout will be eVin (electronic vaccine intelligence network), which is already being used in the universal immunisation programme. It will be repurposed and augmented by several-fold. “India has a lot of storage facilities for a vaccine (Covishield) that requires temperatures between 2 degrees Celsius and 8 degrees Celsius, slightly less for something that requires minus 20 degrees Celsius and almost nothing for vaccines requiring minus 70 degrees Celsius,” said Poonawalla. 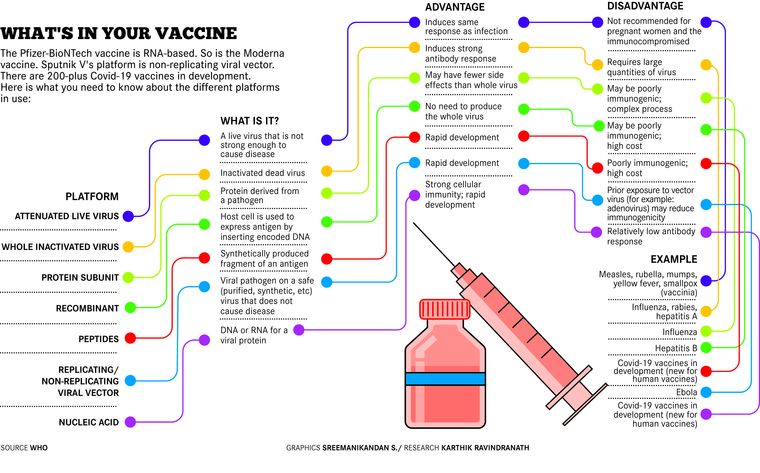 Procuring auto disable (AD) syringes (which cannot be reused) is yet another challenge. “The frontrunner vaccine being launched in India would need a 0.5ml AD syringe for intramuscular drug delivery. In addition to the annual procurement of 300-350 million units of these syringes by the government for the universal immunisation programme, the health ministry has placed additional orders with us for 177.6 million syringes to be supplied by March 2021,” said Rajiv Nath, managing director of Hindustan Syringes and Medical Devices. He, however, warned that warehousing could be a challenge since the government had not been able to pick up the stocks for the UIP this year. “Unless those spaces are emptied out, where will the new stocks be stored?” he asked.

Nath wanted the government to provide clarity on the various types of syringes required for the vaccines under development—intradermal, intranasal or oral. “Each type would require a matching syringe type. Syringe production is not like the production of PPE kits which can be easily ramped up. It requires precision engineered multi-cavity moulds, equipment and automation that have a lead time of nine months to a year from reputed suppliers in Europe and Japan,” he said.

Apart from logistical challenges, the government also needs to closely monitor adverse events related to vaccination. “The vaccine safety surveillance will bring new challenges as the recipients will be primarily an adult population,” said Dr N.K. Arora, former chairman, National AEFI (Adverse Events following Immunisation) Committee. “All AEFI committees will now have adult physicians including general physicians, pulmonologists, cardiologists and neurologists. A training programme for these new members is already under preparation,” he said. “In addition, a cascade training programme for health workers across the country is also being planned to handle potential AEFIs in adults after vaccination.”

Khera said when the pentavalent vaccine was introduced a few years ago, deaths were reported in Jammu and Kashmir and Kerala, leading to a major controversy. “Upon investigation, we found that those were not linked to vaccination. Side-effects do get amplified and so proper investigation into each episode is required. This time, the challenge will be greater because people involved may have comorbidities. Care has to be taken so that each incident is reported and investigated,” he said.

Establishing causality is complicated. “Sometimes, the cause is clear, and can be established easily. At other times, it is not,” said Kang. For instance, if five cases of seizures after vaccination occur in a week, it is not hard to establish causality. But if there is just a single case of seizure in a week, establishing the link to the vaccine can be complicated, and would require a lot of investigation, explained Kang.

The recent controversy over Covishield after a volunteer who took part in the vaccine trial alleged that it triggered an adverse reaction, resulting in multi-crore suits and counter suits, has brought to the fore the critical issues of transparency and regulatory processes. Mechanisms to ensure independent monitoring by the drug regulator do exist. But who pays the compensation in case of a proven adverse event remains an issue that needs to be addressed in the legal framework of clinical trials.

The role of the drug regulator will be in focus in the coming months, after the vaccine receives emergency authorisation and is rolled out. Transparency and clear communication will be the key to building confidence and mitigating vaccine hesitancy among the public over a vaccine that has been developed in record time. Its rollout will test the resolve and resilience of India’s public health system.