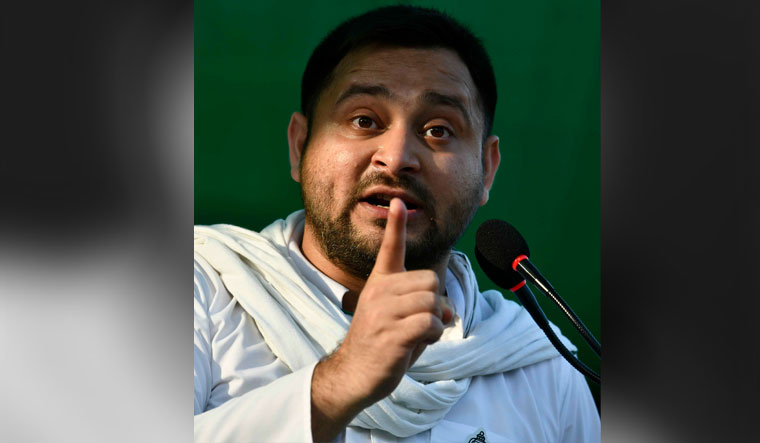 Virender Sehwag can be credited with unwittingly triggering a change in Bihar politics. In 2008, when the Indian Premier League was launched, the swashbuckling cricketer was named captain of the Delhi Daredevils team. There was a 19-year-old batsman in the team, eager for a chance. But Sehwag kept him on the bench. After waiting for four years, Tejashwi Yadav gave up and chose to follow his illustrious father, Lalu Prasad, into politics. On November 10, when the final of the 13th edition of the IPL was being played in Dubai, Tejashwi was leading the Rashtriya Janata Dal’s fightback in Patna. The RJD won 75 seats in the assembly elections, finishing as the single-largest party with an improved vote share.

As a politician, Tejashwi turned out to be a revelation during the 45-day election campaign. Undeterred by the Covid-19 pandemic, he toured Bihar extensively, meeting people and raising issues against the Nitish Kumar government. Early opinion polls had predicted a comfortable majority for the National Democratic Alliance. But Tejashwi did not give up. He managed to turn the tide on September 27 with a dramatic announcement that his first order as chief minister would be to give jobs to 10 lakh people. The promise caught on, drawing huge crowds of enthusiastic youth to his rallies.

Tejashwi, who celebrated his 31st birthday on November 9, was the sole face of the grand alliance. He single-handedly took on the entire NDA leadership of Prime Minister Narendra Modi, Union Home Minister Amit Shah, Nitish and a host of Union ministers. “As many as 30 helicopters were flying daily in Bihar to counter Tejashwi’s single chopper,” said RJD spokesperson Nawal Kishore. “Everyone targeted him, yet he stuck to his narrative of providing jobs and refused to be drawn into their issues.”

In the absence of his father, Tejashwi addressed 251 rallies across 243 seats in 20 days. On October 31 alone, he attended 19 rallies. He was flanked by his political secretary Sanjay Yadav and Rajya Sabha MP Manoj Jha, who helped him fine-tune his campaign and stay the course.

RJD sources said the party’s image makeover under Tejashwi started two years ago as the party inducted and gave responsibilities to members from all castes, especially the EBCs (Extremely Backward Castes). The plan was to shake off the party’s Muslim-Yadav tag. It added 1.06 crore new members and Tejashwi stayed in touch with them through WhatsApp and other social media platforms.

“Our social media campaign drew more views and publicity than that of the BJP and even Modi. We asked our MLAs and all district units to be active on social media, which helped us reach out to people,” said Kishore.

In a tactical move, Tejashwi excluded his father's pictures from party posters and even apologised for the mistakes committed during the early days of the RJD rule, saying he was just a child back then. Moreover, his style of campaign was different from that of his father as he did not raise caste issues or attack Modi.

Tejashwi, who is the youngest of Lalu's nine children, has been accepted as the family’s political heir. His elder brother Tej Pratap, who was opposed to his primacy in the past, seems to have come around. Tejashwi appears respectful towards his elder brother and can be seen touching his feet whenever he meets him.

While Tejashwi responded with equanimity to the barbs hurled at him by senior NDA leaders, he was less tolerant about questions about his leadership from within his own alliance. He forced out “opportunist” allies like Jitan Ram Manjhi, Upendra Kushwaha and Mukesh Sahani after they questioned his leadership. The generational shift within the RJD, too, was visible, with senior leaders like the late Raghuvansh Prasad Singh leaving the party. Tejashwi selected candidates based on their winnability and several sitting MLAs were denied tickets in the process. The alliance drew up a common minimum programme with inputs from the Congress and the left parties.

Tejashwi’s commendable performance has invigorated the anti-BJP front as the RJD has been the only party in Bihar which has been consistent in its ideological position against saffron politics. The ascent of young leaders like Tejashwi and Chirag Paswan heralds a major break in Bihar politics as they plot a course away from the social justice politics practised by their fathers. But they will have to work really hard to retain their committed vote banks while aligning their politics to new realities.

Tejashwi’s detractors used to ridicule him as “ninth pass” for quitting studies to pursue cricket, but RJD leaders say it no longer matters as the young leader has proven his mettle in the political field. But he now has the huge responsibility of keeping his flock of 75 MLAs together and carrying forward the fight against the NDA government. Unlike in the IPL, Tejashwi is the captain of his team and its future is now in his own hands.