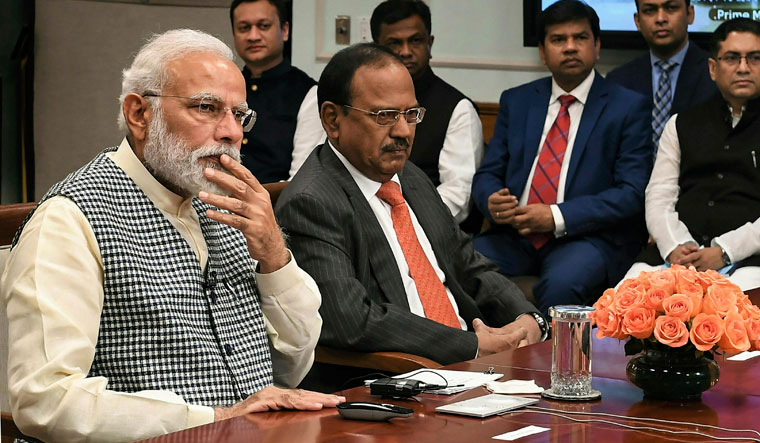 A year after articles 370 and 35A were struck down, a list of challenges still confronts the Centre. These include legally defending the bifurcation of Jammu and Kashmir, assuring people of the region that the decision was not an attempt to change demography, and defeating the home-grown militancy born of a deep sense of alienation in Kashmiri Muslims.

“The alienation of the Kashmiri Muslim is nearly 100 per cent after the abrogation of Article 370,” said former home secretary G.K. Pillai, who was part of discussions between the Centre and Kashmiri groups during the previous UPA government. “The Covid-19 crisis and the ensuing lockdown have been a blessing in disguise for the security situation. How the government utilises this time to generate employment, initiate developmental works and launch outreach programmes will temper the repercussions later.”

With the delimitation process and new domicile law, Kashmiris feel they can be dispossessed of their rights by hegemonic control through new settlers, said M.M. Ansari, former interlocutor, Jammu and Kashmir.

Policymakers in Delhi, however, are confident that once the benefits of the new domicile law start showing, people will embrace the change.

“A variety of developmental activities were anticipated, but little happened after Jammu and Kashmir went into a second lockdown because of Covid-19,” admitted a government official.

The benefits of certain Central laws are also yet to reach the grassroots. “The empowerment of the Panchayati Raj institutions is still not complete. The babus in the central secretariat do not believe in decentralisation of powers,” said Anil Sharma, president of the All Jammu and Kashmir Panchayat Conference. “People feel as if they did something wrong by supporting the abrogation. They cannot meet any administrative secretary for redressal of their grievances. Corruption continues at all levels.”
Anoop Kaul, chairman of Sampoorn Kashmir Sanghathan, said the government should issue a domicile certificate to all Kashmiri Pandits living outside the Union territory. He also demanded that a truth and reconciliation commission be set up to bring out the actual reasons behind the exodus and bring all culprits to justice.

There is also growing resentment among people, especially in Jammu, about the UT status; home ministry sources indicated that Home Minister Amit Shah, who wants to control the security situation, is keen on restoring statehood. D.K. Pathak, former Border Security Force chief, said heavy deployment of security forces had prevented terror incidents, but a wave of mass mobilisation can be expected in future.

The litmus test for the Centre would be the phased withdrawal of security forces and the smooth conduct of assembly elections. Sources said that Delhi would like to wait for the delimitation process to end and economic activity to pick up before calling elections.

Sources also said that the Centre might release a few political detainees as a symbolic gesture to get public support. By now, many of the detainees are too weak to shape public opinion.

The separatists have also lost their power. Recently, Syed Ali Shah Geelani resigned from his faction of the All Party Hurriyat Conference. Intelligence agencies have inputs on how the Pakistan Inter-Services Intelligence was leaning on Geelani to control the narrative in Kashmir, which he failed at.

The ISI is now, reportedly, pooling the resources of Jaish-e-Mohammed and Lashkar-e-Taiba for infiltration and attacks. Pakistan seems to be worried that further integration with India would sever social ties between PoK and Jammu and Kashmir, and is trying to lure young professionals from the valley who sympathise with the Pakistani narrative on Kashmir.

Delhi's direct control of the security grid in Kashmir could give it the upper hand, but for normalcy to return, more bloodshed cannot be ruled out. However, the good news for Delhi is the burgeoning pro-independence sentiment in PoK. “Instead of keeping the [24 seats reserved for PoK in the assembly] empty, the Indian government should consider nominating the people from PoK living in exile to those seats,” Amjad Ayub Mirza, from Mirpur in PoK and living in exile in the UK, told THE WEEK.

Geo-strategic experts said the abrogation was also meant to send signals to China and Pakistan. “The Modi government wanted to tell them that after such internal reorganisation, a red line will be drawn on their interventionist policies,” said Srikanth Kondapalli, a professor in Chinese studies at Jawaharlal Nehru University. “However, China's approach is to put India on the defensive, and hence took the issue to the UN Security Council thrice last year. If China does not resist the lifting of Article 370, the Kashmir land it acquired from Pakistan (including Aghil, Shimshal, Ruksam and Sakshgam) will be in jeopardy.” India, in a tit for tat move, raised the Hong Kong issue at the UN Human Rights Council in July.

Pillai said Modi was disillusioned with Chinese president Xi Jinping and there was a worry that India was joining the anti-China chorus with the US. “India needs friends, and in diplomacy, there are no permanent friends, only permanent interests,” he said.

Ansari said the way forward for peace in the region was a tripartite dialogue with Pakistan and China, as the Line of Control and the Line of Actual Control were not internationally accepted borders.
Referring to the Galwan Valley clash of June, Pillai said: “India cannot open too many fronts. It needs to be careful how it treats its neighbours. When we deal with the Kashmir situation, it is not only the domestic audience that is listening. We know the Chinese were not only listening and watching, but also preparing,” Pillai said, referring to the Galwan Valley clash of June.

A section of the security establishment, however, believed that Chinese ambitions in Kashmir had nothing to do with Article 370 and that they would grab any territory if there was an opportunity.

“India will not hesitate from revisiting its China policy,” said a top intelligence official. “India will pursue strategic autonomy by not working against interests of any country, but whenever Indian interests overlap, it will collaborate with others, including in military cooperation.”

As for the on-ground situation in Jammu and Kashmir, a security expert in the government said National Security Advisor Ajit Doval would be the man to take the Union territory out of the double lockdown. “History is replete with examples of how princely states that merged with India grew to become world-class destinations. The IT city of Hyderabad is one example and they can thank [Sardar Vallabhbhai] Patel for it,” said a government official.

The government hopes to do the same with Jammu and Kashmir, and Ladakh.