It was a cartridge that triggered India’s First War of Independence. The cartridge had symbolically united Hindu and Muslim soldiers against their English masters. Had that war succeeded, perhaps the nation would not have been divided at birth 90 years later.

While Mangal Pandey’s defiance of his commanders on March 29, 1857, is considered the first act of rebellion in this war, the uprising actually began a month and a half later in Meerut cantonment, where soldiers had refused to accept their ammunition (cartridges for the Lee Enfield guns, supposedly greased with tallow from cow and pig fat). The soldiers were court-martialled and locked up, triggering the unrest. Their fellow soldiers broke open the prison, and the mutinous soldiers first attacked their English officers and their families, then marched towards Delhi, the ancient and symbolic seat of power in India. On May 11, they crowned the aged and reluctant Mughal, Bahadur Shah Zafar, as the emperor of India. They had also taken over the Red Fort from the British East India Company.

The English were caught by surprise, and retreated. But, they blew up their own arsenal, leaving very little for the rebels to claim. Initially, the rebels succeeded in taking over the surrounding areas. The British forces, however, started the Siege of Delhi on July 1. They commanded a position north of the Delhi ridge and circled the city, although not entirely.

The unrest against the Company rule had spread through the land, with peasants, soldiers and nobility turning against its policies. Mutinous troops from neighbouring cantonments trickled into the city, determined to drive out the foreign rulers. However, the rebels suffered from a lack of command. Bakht Khan, their commander-in-chief, was a natural leader, but there was infighting between various factions of rebels, as was seen in the Battle of Najafgarh. While there was no lack of fighting spirit, no soldier can fight on an empty stomach; even the most hardened rebel needs to be paid. As these soldiers plundered their own compatriots, it was not long before the citizens of Delhi got tired of the rebels themselves. 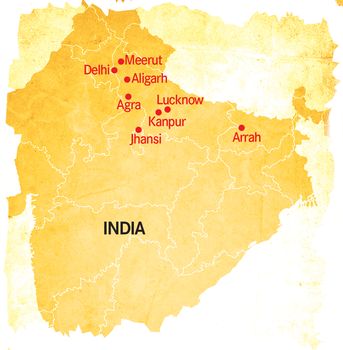 Meanwhile, the British were able to establish a supply line from Punjab. The rebels tried sabotaging this line, but failed for lack of a strategic vision. With the arrival of the Punjab Moveable Column, the replenished British forces were finally able to breach the rebel lines at Kashmiri Gate on September 14. They put up their guns at Juma Masjid, killed two of the emperor’s sons and a grandson, and had Zafar tried for treason.

The siege of Awadh lasted longer. The British troops were held up in the Residency almost soon after the mutiny in Meerut. The rebels were not able to breach the walls, but they kept up a steady attack. It was only in November, after the second relief column arrived in Lucknow with Colin Campbell, that the garrison was relieved and the civilians evacuated. It would, however, take Campbell up to the next summer to declare a win over Lucknow. The resistance here was fierce. Lucknow, however, did fall.

The loss of Delhi was a symbolic blow; the loss of Awadh was a direct assault on the evolved Ganga-Jamuna tehzeeb. After this, all resistance fell one by one. There were many reasons why the uprising failed, but we are not going into that here.

What we know is that as 1857 ushered in a new era of British rule, it brought a sad end to the culture that was a marvellous confluence of Hinduism and Islam. “Lucknow was so evolved culturally, it could have become like Paris had it not been hit,”

“In Delhi, there were so many translations happening from and to various languages. Had Delhi won that year, who knows, we would have been thinking in our own languages today, not in English.”

But, this new dawn for the crown also ushered in the sunset of the empire. “The concept of the nation state emerged from the ashes of this war,” says Chhina. “We had learnt that, as a people, we were capable of putting aside differences and working towards an independent India.”

Ironically, at the same time, it sowed the seeds of partition. “The Punjabis did not want a separate nation, neither did the Pashtuns of the North-West Frontier Province,” says Chhina. “It was the taluqdars [aristocrats] of Awadh, dispossessed of their lands after the annexation of Awadh [before the uprising], who were the most vociferous in demanding partition.” So yes, while it is not easy to predict how India would have shaped up if the rebellion had succeeded in throwing out the British, at least the land would not have been torn into two on the basis of religion.