Inflation is hurting everyone, and it might get worse 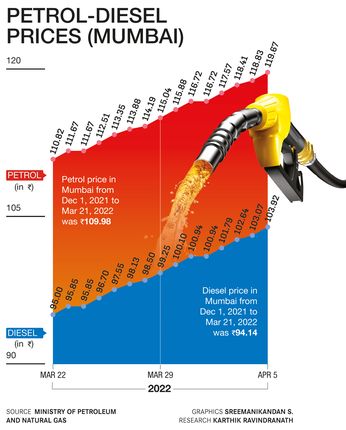 The price of diesel hit three figures for the first time in Maharashtra on March 30. Though it was expected, as fuel prices have been climbing steadily for a while, it seemed to have a psychological effect on goods transporters. “There are close to 20 crore people linked to the transportation industry. If costs continue to rise and they are not passed on, small operators will not be able to sustain, leading to higher unemployment,” said Bal Malkit Singh, chairman of the core committee of the All India Motor Transport Congress.

Fuel prices had been on a freeze from November 2021 to February 2022, probably because of the assembly elections in some crucial states. But from March 21, the oil marketing companies raised petrol and diesel prices almost daily amid a global price rise of crude owing to the Russian invasion of Ukraine. “Diesel is about 65 per cent of our costs,” said Singh. “Eventually there comes a time when they become unbearable. We have been waiting and watching where this rise would stop. But, the transportation cost will go up more than 15 per cent.”

That is bad news for everybody. The rise in transport costs will lead to a rise in the cost of everything from cars and consumer durables to groceries and vegetables. “This is a double whammy for us,” said a delivery van operator. “First we have to pay more for fuel and then we pay more for the daily necessities.”

The price headwinds come on the heels of a broader inflationary pressure already being seen across sectors. Consumer goods companies, for instance, raised prices several times in the last few months; first because of the supply-side disruptions caused by the pandemic, and then the Russia-Ukraine conflict.

Refined sunflower constitutes 10 per cent of India’s consumption of 240 lakh tonnes of edible oils, and Ukraine and Russia account for as much as 90 per cent of India’s annual crude sunflower oil requirement, according to ratings agency CRISIL. Palm oil prices are also on the boil, as Indonesia, a major producer, curbed exports to control domestic prices. In February, sunflower oil prices rose 4 per cent, groundnut oil gained 1 per cent and mustard oil was up 9 per cent month-on-month, according to data from retail intelligence platform Bizom. Compared with pre-pandemic levels, sunflower oil has soared 50 per cent, palm oil is up 23 per cent and soybean oil has gained 17 per cent.

Palm oil is a key ingredient in soaps, detergents and shampoos. It is also a major ingredient in the snack foods and bakery industry. “The Russia-Ukraine crisis is seeing oil and logistics prices move up further, causing more pressure on profitability of FMCG companies. This is leading to an increase in prices of both food and non-food products that use oil as a key ingredient,” said Akshay D’Souza, chief of growth and insights at Bizom.

In March, Hindustan Unilever, India’s largest consumer goods maker, raised prices of soaps and detergents by 3 per cent to 5 per cent. It had raised prices in February across its product portfolio. Over the past month, Amul and Mother Dairy raised the prices of milk. Prices of all food items, from coffee to cookies, have hardened.

It is not just consumer goods companies that are feeling the pinch. Builders are worried about the steep rise in the cost of cement and steel. Power and freight comprise 50 per cent to 55 per cent of the total operating cost of the cement industry, and therefore the surge in diesel and coal prices is likely to significantly impact their earnings, said Abhishek Lodhiya, lead analyst at Yes Securities.

Cement prices went up in many regions in the January-March quarter. In west and south India, prices were up 9 per cent from a year ago, while in central and east India, prices gained 1 per cent to 2 per cent. They may go up again if the companies try to maintain profit margins. “On every $20 per tonne increase in fuel cost, a price hike of 3 per cent to 5 per cent (Rs10-17 a bag) has become imperative to maintain EBITDA (earnings before interest, taxes, depreciation and amortisation) per tonne at third quarter levels,” said Lodhiya.

Real estate developers say they are considering various measures to counter rising costs, including raising the prices of unsold units by 10-15 per cent. “Developers have absorbed the incremental cost for a long time and will now look at passing it on to the home buyers as they have no choice,” said Dhaval Ajmera, secretary of the industry body CREDAI-MCHI.

The rising cost of steel, aluminium and other commodities has forced several automakers to raise their prices. Tata Motors, for instance, recently raised prices of its commercial vehicles by 2 per cent to 2.5 per cent. Toyota Kirloskar raised prices by up to 4 per cent on April 1.

These are all adding to India’s surging inflation. Sonal Varma, MD and chief economist at Nomura, sees headline inflation continuing to breach the Reserve Bank’s comfort band of 2 per cent to 6 per cent for much of 2022 and average around 6.3 per cent year-on-year. There are also fiscal risks for India. A near doubling of global fertiliser prices may lead to a rise in the fertiliser subsidies by 0.3 per cent of the GDP over the budgeted amount, said Varma.

“With oil sustaining above $100 per barrel and other commodity pressures remaining intact, the current account deficit to GDP ratio may touch 2.8 per cent to 3 per cent of GDP in the financial year 2022-23,” said Madhavi Arora, lead economist at Emkay Global Financial Services. “Capital account also remains tricky, implying that balance of payments may get back to a deep deficit of $45 billion in FY23 after $40 billion expected in FY22.”