It is a shame for India and unfortunate for Bangladesh, Momen said 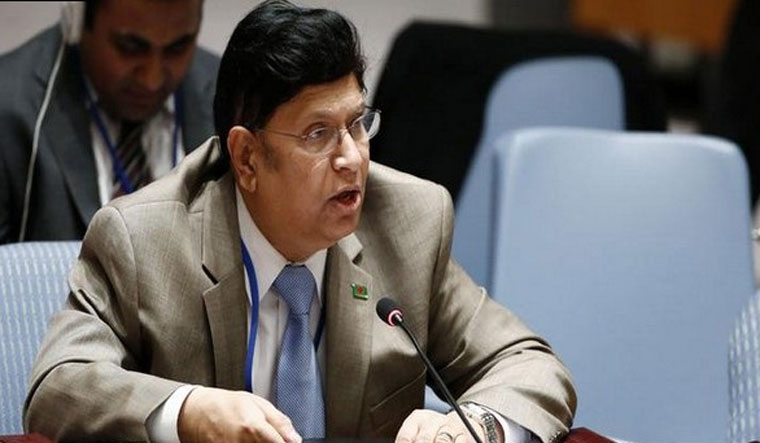 Bangladesh Foreign Minister A.K. Abdul Momen on Saturday described the killings on the Indo-Bangla border as unfortunate as India's border forces continue to use lethal arms despite assurance from the top level that they would use non-lethal weapons in frontier management.

Momen's comments came days after two Bangladeshis were shot dead at the Indo-Bangla border in West Bengal's Coochbehar district in the early hours of Friday last after they attacked a BSF patrol party that stopped them from smuggling cattle.

According to reports from Kolkata and New Delhi, the district police claimed that three persons had died in the incident, including an Indian. A Border Security Force (BSF) personnel was also injured.

It is a shame for India and unfortunate for Bangladesh, Momen told reporters while responding to a question during his visit to the mausoleum of the country's founder Sheikh Mujibur Rahman at Tungipara in southwestern Bangladesh.

Claiming that the civil society and ordinary people in West Bengal have also expressed their concern on the issue, he said, "The general public, intellectuals, journalists and artists of the state have recently raised a demand to stop any killing at the border."

"We don't want to see the killing of anyone on the frontier, be it Bangladeshi or Indian," the minister said, adding that Dhaka expects that the Indian authorities will ensure zero killing at the border.

Momen said he wondered why the decision to not use lethal weapons was not enforced, despite the commitment of India on the issue at the highest level.

He recalled that during Prime Minister Narendra Modi's visit to Bangladesh in March, the two sides agreed that any death along the border is a matter of concern and directed the border guarding forces concerned to enhance people-oriented measures for ensuring border security and bringing down such death of civilians to a zero level.

Following the November 12 incident, BSF Additional Director General Y B Khurania in New Delhi had said that "a group of 60 miscreants assembled on both sides of the border to smuggle cattle. The miscreants tried to smuggle cattle by throwing improvised bamboo cantilevers on the barbed wires. When a BSF patrol party tried to stop them, they started pelting stones at the party and attacked them with iron rods and sticks".

The BSF troops on duty ahead of the India-Bangladesh border fence asked the miscreants to return, but they did not pay heed. Subsequently, the BSF officials used non-lethal munitions, but that too did not deter them.

"Two BSF constables got surrounded and were badly hurt (by the miscreants). It was then that they opened fire in self-defence. They fired a few rounds in the air. Later it was found that two persons on that side of the border had died in the firing," Khurania said.

Earlier this week, Indian High Commissioner to Dhaka Vikram Kumar Doraiswami said India is always vigilant to stop the killings on borders with Bangladesh, and such casualty is unexpected for the both countries.

"We do not want border killings in any country," he told journalists during his visit to Rangpur.

Joint steps should be taken by the two countries to resolve such tragic incidents, he said.

The Indian border guards have been specifically told not to open fire on the borders if there is no threat of attack on them, Doraiswami said.

"(But) illegal activities have been increasing at the borders. Different countries are using the land of Bangladesh as a route for their illegal activities. If we want to stop border killings, we have to stop smuggling," the envoy said.

Doriswami, however, said incidents of border killings dropped significantly in the recent period as compared to the past.

"If we take into account the statistics, there are fewer border killings now than at any other time. Any killings or injuries at the border are tragic for both countries. Such tragic incidents need to be resolved through joint actions," he said.