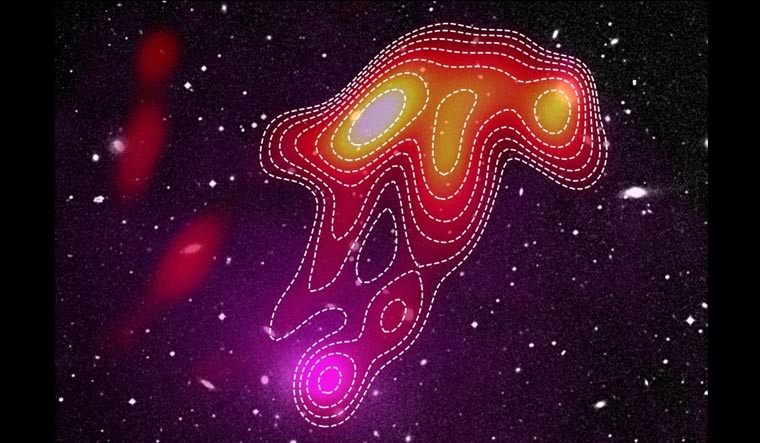 Astronomers have discovered a cosmic phenomenon with a striking resemblance to a jellyfish.

A radio telescope located in outback Western Australia has found the cosmic phenomenon of a cluster  for 12 hours at five radio frequencies between 87.5 and 215.5 megahertz. The Australian-Italian team used the Murchison Widefield Array (MWA) telescope to observe a cluster of galaxies known as Abell 2877.

The discovery of the mnew cosmic phenomenon has been published  in The Astrophysical Journal.

Lead author and PhD candidate Torrance Hodgson, from the Curtin University node of the International Centre for Radio Astronomy Research (ICRAR) in Perth, said, "We looked at the data, and as we turned down the frequency, we saw a ghostly jellyfish-like structure begin to emerge."

"This radio jellyfish holds a world record of sorts. Whilst it's bright at regular FM radio frequencies, at 200 MHz the emission all but disappears.

"No other extragalactic emission like this has been observed to disappear anywhere near so rapidly."

This uniquely steep spectrum has been challenging to explain. "We've had to undertake some cosmic archaeology to understand the ancient background story of the jellyfish," said Hodgson.

"Our working theory is that around 2 billion years ago, a handful of supermassive black holes from multiple galaxies spewed out powerful jets of plasma. This plasma faded, went quiet, and lay dormant.

"Then quite recently, two things happened—the plasma started mixing at the same time as very gentle shock waves passed through the system.

"This has briefly reignited the plasma, lighting up the jellyfish and its tentacles for us to see."

The jellyfish is over a third of the Moon's diameter when observed from Earth, but can only be seen with low-frequency radio telescopes.

"Most radio telescopes can't achieve observations this low due to their design or location," said Hodgson.

The site has been chosen to host the low-frequency antennas for the SKA, with construction scheduled to begin in less than a year.

Prof Johnston-Hollitt, Hodgson's supervisor and co-author, said the SKA will give us an unparalleled view of the low-frequency Universe.

"The SKA will be thousands of times more sensitive and have much better resolution than the MWA, so there may be many other mysterious radio jellyfish waiting to be discovered once it's operational.

"We're about to build an instrument to make a high resolution, fast frame-rate movie of the evolving radio Universe. It will show us from the first stars and galaxies through to the present day," she said.