Help pours in from Gulf region for Kerala Floods 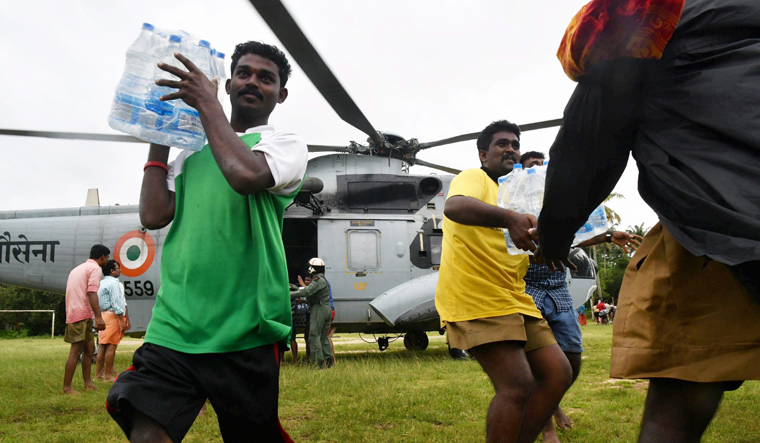 People carry flood relief material to be sent to flood-affected areas in Thiruvalla in Kerala, on Sunday | PTI

As Kerala prepares for a massive rehabilitation drive after last week's unprecedented flood, the news of contributions from various quarters has raised hopes in the state. Many have generously contributed to the state's relief and rehabilitation works. International and national help is flowing into the state.

The Qatar Charity, through its representative in India, has launched emergency relief for those affected by the floods with a total value of half a million riyals during the first stage, the Gulf Times reported. Amir Sheikh Tamim bin Hamad al-Thani issued a directive to allocate Rs 34.89 crore in aid for those affected by the floods that recently hit the southern Indian state of Kerala, to help provide shelter to those who lost their homes as a result of the humanitarian crisis, the daily reported.

Hundreds of Malayalee associations in the Gulf countries, from church prayer groups to arts and cultural outfits, have also united to raise funds. Easily Rs 100 crore is expected, said the official.

There are reports that similar support is underway from Saudi Arabia. “On behalf of ourselves as well as the people and government of Saudi Arabia, we express our deepest sorrow and offer condolences to you as well as to the families of the deceased and to the people of India,” King Salman of Saudi was quoted by the Saudi News Agency.

Meanwhile, Indian businessmen based in UAE have announced Rs 12.5 crore donation for flood relief operations in the deluge-hit Kerala, according to a media report.

KP Hussain, Chairman of Fathima Healthcare Group, has donated Rs 5 crore. He said that Rs 10 million out of ₹50 million will directly go to the Kerala Chief Minister’s relief fund, while the rest will be allocated for medical relief aid, the Gulf paper added.

Hussain said that his group has coordinated with the state’s health secretary to send volunteers from its medical faculty. This includes doctors and paramedics being sent to relief camps.

Azad Moopen, an Indian, Founder, Chairman and MD of Aster DM Healthcare, pledged Rs 50 lakh. The group also announced that it had mobilised a disaster support team of over 300 volunteers.

It is noteworthy that countries in the Gulf region have been the biggest contributors among the international aid. Indians form a major part of the labour force in the Gulf countries. Indian expatriates make up nearly 27 per cent of the UAE population. Of these, a sizeable number are people from Kerala.

Over the last week, Kerala has battled unprecedented flood and rains, the worst in a century. The state has faced more than 200 deaths, property destruction, loss of goods and commodities and thousands of people have been displaced from their homes. Chief Minister Pinarayi Vijayan said Kerala faces about Rs 20,000 crore worth loss. Prime Minister Narendra Modi, when he visited Kerala on Saturday and announced an immediate relief of Rs 500 crore after conducting an aerial survey of the affected areas. Home Minister Rajnath Singh had announced Rs 100 crore relief earlier in the week. This is in addition to the Rs 80 crore relief announced on July 25 by Minister of State for Home Affairs Kiren Rijiju after his visit.