A member of the Save Farm Land and Save Environment Committee in Bhangar was gunned down on Friday allegedly by a gang of Trinamool Congress workers. It is alleged that the accused were sent by TMC leader Arabul Islam.

Hafijul Mollah, 42, a member of the committee, was a candidate in the Panchyat election to be held on Monday. He was campaigning outside the liberated zone in Natunhat of the Bhangar block of South 24 Parganas, just 30 km from  Kolkata, when he was shot at. This is the first death of a committee member since they freed the zone in January 2017. 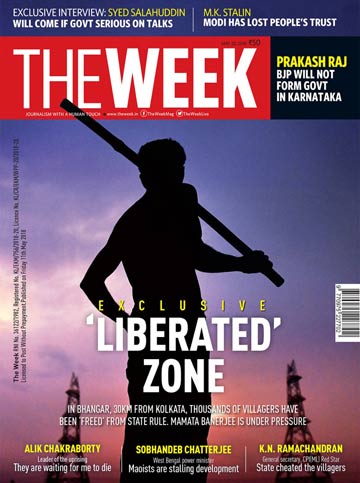 THE WEEK, in its latest issue, has published a detailed cover story on the liberated zones in West Bengal

The incident has taken place on the day THE WEEK published a detailed cover story on the liberated zones in West Bengal. The issue has hit the market all over India on Friday.

The incident took Chief Minister Mamata Banerjee by surprise as she was desperate to find a solution to the power grid project for which around 14 acres of land were allegedly acquired by force by the government of West Bengal in 2013. It was Arabul who led the local administration to acquire land from unwilling farmers at gun point.

Sources have confirmed to THE WEEK that Mamata has asked police to arrest Arabul immediately.

“The chief minister was very angry and ordered South 24 Parganas and Kolkata police to arrest Arabul Islam. We are trying to nab him,” said a senior officer of the West Bengal police.

The road that leads to Bhangar from Kolkta has been blocked and Section 144 has been imposed around the liberated zone.

Hafijul was to contest the Panchayat election as an independent candidate with the support of the Save Farm Land Committee.

According to Moshraf Hussein, joint secretary of the committee, a big team led by the Hafijul was campaigning at Natunhat North, just outside the liberated zone.

“The Trinamool Congress team was heavily armed and Sheikh Khude, the right hand man of Arabul, fired at him (Hafijul) from a close range. The bullet pierced his chest,” said Mosharaf.

Hafijul was then brought back to Machibhanga profusely bleeding. He could have been saved had he been allowed to reach the hospitals in the New Town area of Rajharhat in Kolkata, just 10 km from the place where he was attacked. But villagers said they faced obstruction when they tried to take him out of their zone.

Hasibul’s heartbeat stopped around 6.30 pm, just half an hour after he was shot. His body was later allowed to be taken to the government hospital where he was declared brought dead.

A heavy police contingent reached Bhangar after the incident fearing retaliation as state government believed that Maoists have infested the free zone of Bhangar.

A top source of the CPI (ML) Red Star has claimed that the chief minister has asked the police to arrest Arabul to rescue him. “Otherwise he would be killed by irate mob,” said the leader.