What US pullout from Iran deal means for India

Will the US decision have impact on oil prices and Chabhar project? 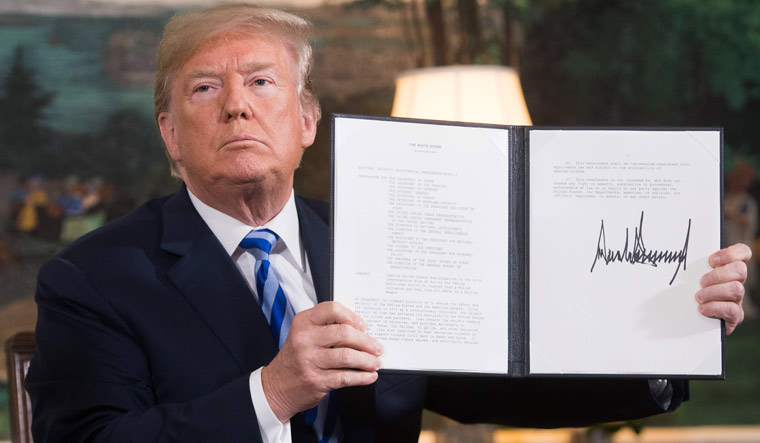 The suspense is finally over. US President Donald Trump pulled out of the Iran nuclear deal which he termed as “defective to the core’’ sending diplomats across Europe into a spin. Closer home, the American walk out of the deal—which was a major plank of the Obama administration—will have its ripple effects.

For India, it means a tightrope walk to balance the energy and strategic interests in Iran with its friendship with America. The statement issued by the ministry of external affairs—very fair and neutral—points to how careful and determined India is to not take sides.

“India has always maintained that the Iranian nuclear issue should be resolved peacefully through dialogue and diplomacy by respecting Iran’s right to peaceful uses of nuclear energy as also the international community’s strong interest in the exclusively peaceful nature of Iran’s nuclear programme. All parties should engage constructively to address and resolve issues that have arises (sic) respect to the JCPOA,’’ said the press release.

Beyond the almost yogic contorting to find just the right note for this difficult position—especially as Obama administration had a more lenient view of India’s engagement with the Middle East—the US scraping of the deal means sanctions. Oil prices will spike.

“It will have a major impact. It will push prices up, maybe, to 140 dollars if the Europeans fail to bridge with Iran without the US. The current White House is unpredictable, so we can’t say how this will play out at the moment,’’ said Kabir Taneja associate fellow with the Observer Research Foundation.

The spike, however, might be short lived. “The prices have risen because of the shock of the decision, even though it was expected. They will stabilise,’’ said professor Rajesh Rajagopalan, Centre for International Politics, Organization and Disarmament, School of International Studies of Jawaharlal Nehru University.

At the moment, even Europe—that is firmly behind the deal—is scrambling to figure out how the sanctions will play out. It will, however, impact financial dealing with Iran. All transactions will need another route and will be messy. India, which had been slow in reacting to the opening up of Iran, might, however, be rewarded for its cautious approach.

“Our 'play it safe' attitude has benefited us,’’ said Md. Muddassir Quamar, associate fellow of Institute for Defence Analyses.

However, one thing is clear that India will be pushing to find a way out while preserving its rather bold foray into the Middle East. And there is a lot at stake. The fate of the Chabhar, a pet project, might be impacted with this decision. India hopes to use the port to bypass Pakistan and supply goods to Afghanistan through Iran.

It is unclear how the sanctions will play out here. “It has taken over a decade for the project to start. The progress is very slow. So, I don’t think it will make much difference,’’ said Rajagopalan.