'Human trafficking one of the fastest growing crimes' 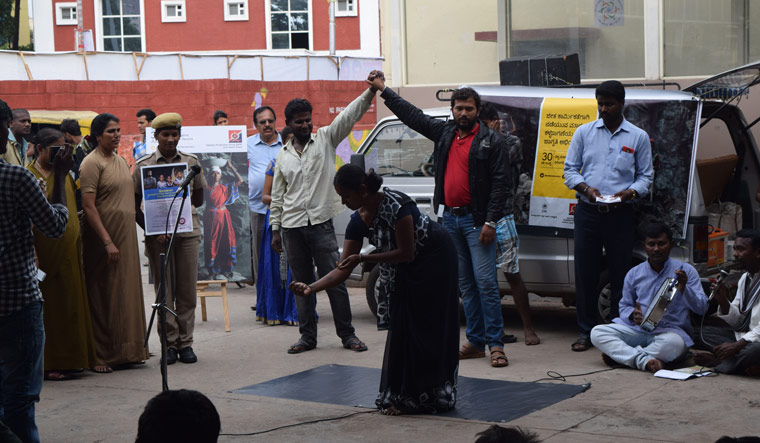 Rajat Sharma (name changed) from Bihar was trafficked for forced labour. The teenager was brought to Bengaluru by train and made to work in a backpack manufacturing unit on the first floor of a house at Shivajinagar in Bengaluru.

Sharma would stitch bags and attach straps and buckles to them until midnight and then sleep on the floor at the same dingy place. For more than five months, he had never stepped out of that room. Sometimes, he would open the window and see children play outside and wonder whether if he would ever be able to play again.

Running away from the place seemed impossible. The owner of the manufacturing unit carried a knife and pulled it out casually while visiting the unit. Sharma and the other boys in the unit, all of who were trafficked, would have nightmares of them being dragged inside and chopped up while running away.

Sharma and other victims were finally rescued in 2013.

Human trafficking is very much prevalent in India. Speaking to The Week, Prathima M., associate director, International Justice Mission (IJM), an NGO based in Bengaluru said that trafficking is one of the fastest growing crimes. “Trains are the most predominant modes of human trafficking. Buses do not work for long distance travel. Also, trains are cheaper compared to the other modes of transport,” she added.

As trains are increasingly being used by traffickers to transport victims, awareness programmes on human trafficking seem to be the need of the hour. An awareness drive conducted by the Railway Protection Force (RPF) in collaborration with IJM at the Bengaluru City and Yeshwanthpur railway stations was an eye opener for many. The street plays performed by Nemmadi street theatre group as part of the programme enacted human trafficking for forced labour. The awareness programmes aimed at empowering people to identify the crime and take measures to combat it were conducted as part of the World Day Against Trafficking in Persons.

Debasmita Chattopaddhyaya, security commissioner of RPF, south western railway, who has been part of several rescue operations said: “We rescued 1,100 children in the last 350 days. We would like to encourage our passengers to inform RPF on its tollfree All India Security helpline 182 about any suspicious movement of children or women over railways and be a part of our crusade to save these beautiful lives which will shape our nation. In case you see any scared, malnutrioned, dizzy or uncomfortable children along with suspicious adults, please immediately inform RPF and help us fight human trafficking .”

It is estimated that 85 per cent of trafficking in South Asia is for the purpose of forced labour.