Mercenary US over neighbourly Iran

The abrupt cancellation, for the second time in a row, of the inaugural “2+2” meeting of the foreign and defence ministers of India and the United States slated for July 6 has shaken our establishment. Washington has let it be known that the Modi government must make itself more useful for President Trump’s ‘America First’. Trump keeps repeating that India’s bilateral trade surplus agitates him and Delhi must buy more. Washington prefers a “stand alone” visit by Defence Minister Nirmala Sitharaman so that, at least, some lucrative arms deals could be struck.

Meanwhile, Modi’s latest foreign policy narrative harping on India’s strategic autonomy, regionalism, multilateralism and inclusiveness (which he unveiled in Singapore recently) might not have endeared him to Washington—although his target audience was Beijing. All in all, the US-Indian ‘defining partnership’ stands exposed as a transactional relationship. An inflection point has come.

This was the sombre backdrop to the recent visit by Ambassador Nikki Haley to Delhi. Haley focused on pressuring India to stop buying oil from Iran. The Trump administration presents it as a “win-win” proposition. India is Iran’s second biggest market for oil exports and the loss of that market could hurt Iran, which fits in with Trump’s agenda. This is one thing. 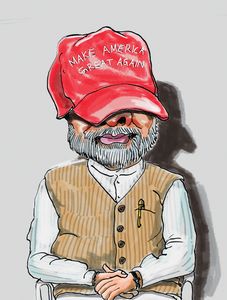 On the other hand, by distorting India’s crude oil supplies from Iran, the US is also pitching for a much larger strategic game, namely, offering itself as a crude oil supplier to India’s rapidly growing energy market. The shale oil revolution has turned the US into not only the largest producer in the world but also a net exporter of crude oil.

Iran’s ‘sweet’ crude is not easy to replace. (The US supplies the ‘sour’ variety.) Again, Iran has been offering a discounted price. But, such considerations do not perturb the Modi government. What if the oil import bill goes up? The additional burden can always be passed on to the Indian consumer, right? India must be the only country, perhaps, which has been unilaterally cutting its favourable trade surplus with the US after Trump came to power. The Modi government managed to reduce the surplus in trade with the US to $28 billion in 2017 from $30.8 billion in 2016. Meanwhile, India raced past Saudi Arabia last year to become the 11th highest holder of US Treasury bonds. The Indian holdings of US Treasuries touched an all-time high of $148.6 billion as of January.

The Modi government estimates that more energy imports from the US will help reduce the bilateral surplus in trade ($28 billion) by at least $4 billion. Suffice to say, the Modi government seems to be willing to take the risk of cutting India’s umbilical cord of oil imports from Iran and turning that big and time-tested supplier hostile in order to appease the Trump administration by buying oil from America (or elsewhere) at much higher costs. It is a bizarre mindset.

All this brings up a big question: Whose interests is it that the Modi government is serving? By now it should have been abundantly clear that Trump’s foreign policies are highly erratic and to bandwagon with his regional policies is foolhardy, to say the least. Iran is an authentic regional power in India’s immediate neighbourhood and it is vital for our long-term interests that the relationship with that country is not undermined.

The Modi government must jettison its ‘unipolar predicament’ and open its eyes to the emergent realities and power shifts taking place in our region and internationally. Simply put, the US lacks the capacity to force its will on Iran. The tidings from Syria and Iraq underscore that Trump’s strategy against Iran is doomed to fail. India must be on the right side of history.