Mani Shankar Aiyar on the hospitality and discussions at Chintan Shivir

As far as Congress is concerned, there is no alternative to the Gandhi triumvirate

Excited as a schoolboy at receiving my first invitation to a Congress gathering in I have forgotten how many years, I arrive at the Sarai Rohilla platform well on time for the commencement of the journey at sunset. My mind goes back to the Sadbhavana Yatra, also by train in Rajiv’s time in 1990. Curious that while Rajiv used to travel by day trains in a humble second-class carriage, so that hundreds could gather to see him at every station where the passenger train stopped, I am escorted to a splendid, well-stocked first-class air-conditioned cabin.

The platforms are overflowing with slogan-shouting crowds as we lumber on to Haryana, but in the gathering darkness the crowds thin out and by the time we cross into Rajasthan they peter out altogether. 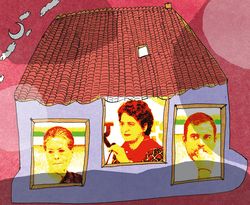 As the sun breaks over the horizon, Chief Minister Ashok Gehlot is on hand with an army of Congress workers. There is one unfortunate Congress woman worker who calls to say she is my liaison officer. I never see her as another worker firmly takes a grip on my bags and proudly leads me to the SUV reserved for my exclusive use. We arrive at the Taj Aravalli. The hospitality is staggering, but the contrast to the frugality and austerity of past Congress gatherings makes my eyebrows rise an inch.

At a sumptuous breakfast, I learn that each delegate has been allotted to one of the six groups that are scheduled to discuss matters. Some appear to have been asked their preference. I have not, probably because I am not on WhatsApp. After anxious inquiries, I find I am to be in the group chaired by P. Chidambaram that is to reflect on the “economy”. Since we are remote from governing the country, a prospect that does not seem feasible in the remaining active decade of my life (I am 81), I had rather hoped, along with many G-23 colleagues, to be in the “organisation” group; but having placed Mukul Wasnik, a (sometime?) G-23 member in the chair, the rest have been carefully kept out, perhaps to ensure a smooth consensus.

In my group, we are given full freedom, even encouraged to speak our minds. In total, over some 14 hours of talks in which every participant intervenes on an average of four to five times, 147 interventions are recorded. Clearly, from right to left, there are several different viewpoints placed on the table, but it seems the chairpersons have been advised to squeeze out of the debate whatever can be described as a consensus. Thus, the liveliness of the discussion, encouraged to be free, frank and fearless, is barely reflected in the final documents, making the public outcome sound overly bland. The basic question posed to our group—what distinguishes the BJP’s economic policy from the Congress’s?—answered by participants with great zest, if with great diversity, is glazed over in the official record. My answer is: crony capitalism v/s the economics of equity—but that is left in cyberspace!

Out of group meetings, it is a great feeling to be reunited after years with the Congress family of which I have been a part for 35 years—an inimitable getting together of colleagues from every part of the country, every community, linguistic and religious, in perfect harmony and no discrimination. This is how the country should be—but isn’t. The jarring note is that the Udaipur Declaration is made available only in Hindi. For the first time in nearly 140 years, we are still waiting for the English version.

The major take-away is the enthusiastic reception given to the speeches of the leadership. It shows that, as far as the party is concerned, and whatever the view outside, swim or sink, there is no alternative to the Gandhi triumvirate.