The ambushing and killing of 22 members of the Central Reserve Police Force’s CoBRA unit in Chhattisgarh—following 76 deaths of security personnel in April 2010 and about 150 since—underlines the need for an immediate rethink of our strategy for dealing with armed “Maoists”. Mao Zedong had described the guerrilla as “fish that swim among the people”. If Naxalism has had such a long life in the heart of India, where no malign “foreign hand” can operate, we must look to other instruments than the gun to find a more humane and lasting solution.

That instrument has been in our armoury since at least 1996, when Parliament passed the Provisions of The Panchayats (Extension to Scheduled Areas) Act (PESA). As the D. Bandyopadhyay committee appointed by the Planning Commission in 2004, and the Aiyar Expert Group under my chairmanship underlined in 2013, the conscientious implementation of PESA will release the people from the trap of having to choose between predatory government officials and a vicious guerrilla movement, by offering the alternative of genuine self-government. Once the people are offered that alternative, the swamp will be drained for want of the sustenance that the people’s support offers them, and the Naxal alligators captured. If not, the ambushes and massacres will be repeated ad nauseam. 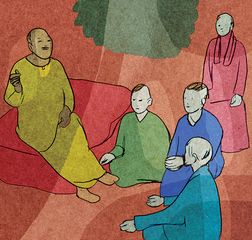 Successive home ministers of all hues have consistently preferred larger budgets, bigger forces, more arms to governance changes that would put real power in the hands of the tribal people to draw them away from the solutions offered by Maoist guerrillas. The guerrilla prevails because he lives among them, serves their elementary needs and, in return, receives their protection and assistance. If the tribal people could be enabled to govern themselves—instead of being thrown to the mercies of the forest guard and the thanadar (policeman), the thekedar (contractor) and the local patwari (village registrar)—as is their right by Constitutional law and the PESA legislation, they would much rather be self-reliant than beholden to the armed outlaw in their midst. All that is needed is state action to devolve functions, finances and functionaries to the duly constituted tribal panchayats, as they are obliged to do by Article 243G of the Constitution and the PESA.

Proponents of armed action offer two justifications that need to be put in perspective. The first is that through Operation Greyhound in the northern districts of Telangana and operations of C60 commandos in Gadchiroli district of Vidarbha, Maharashtra, the security forces ended the Naxal menace in those areas. They did not. They merely pushed the Naxals from well-policed areas in those states to less effectively policed areas in the Abhujmad areas of Bastar district in Chhattisgarh and Malkangiri in Odisha. If they are now pushed out of these tribal redoubts, the danger is that they could resurface in urban areas. Armed action on its own is only an expedient, not a final solution.

The second argument is that under UPA-II a special action plan was devised to ensure government delivery of welfare and development measures that, along with armed action, has reduced the worst concentration of Naxals from nearly 200 districts 15 years ago to about 90 districts now. In my view and those of my expert colleagues, government delivery is no substitute for ownership of the programmes to give the tribal communities a sense of genuine participation in their affairs through their democratically-elected institutions of self-government—the PESA panchayats. That is the humane, Gandhian way and, eventually, the most sustainable forward.