Having singed their fingers with the National Register of Citizens and the Citizenship (Amendment) Act in Assam—that would probably cost them the coming election in that state—the Narendra Modi-Amit Shah duo is now engaged in stoking the fires in Mizoram. Mizoram might today be among the most peaceful states in the Union, but that is entirely owing to the Mizoram Peace Accord that Rajiv Gandhi negotiated in August 1985 which ended the insurgency from 1966 to 1986. The accord has proved so durable that one of the chief insurgents, Zoramthanga, is today the democratically elected chief minister of the state with the most outstanding record on the law-and-order front in the entire country. Modi and Shah are busy returning the state to turmoil.

The proximate cause is the Myanmar refugees fleeing the army in Myanmar to take refuge with their kith and kin in Mizoram. For the Indo-Chin people who populate either side of the River Tiau have always been “one people” whose hearts have not been divided by boundaries drawn by imperial Britain. They have, since time immemorial, regarded themselves as the Zo people, a word so locally resonant as to be included in the name of the state, Mizoram (meaning “the land of the people of the hills”) and in the name of the chief minister, Zoramthanga. The Zo include several “tribes, sub-tribes and clans such as Chin, Kuki, Mizo, Zomi, Paite, Hmar, Lushei, Ralte, Pawi, Lai, Mara, Gangte, Thadou” among others. (Esha Roy, The Indian Express, March 23, 2021). 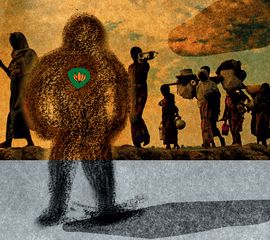 The Zo people are predominantly Christians. They inter-marry, share family ties, celebrate the same rituals and festivals, speak the same tongue and are heirs to the same traditions and culture despite lines on maps drawn by others. Since the military coup and crackdown in Myanmar, the Zo residing on the other side of the border have fled from military oppression and ethnic persecution into the waiting arms of their own people in our country. Yet, Modi-Shah has ordered the state government (indeed, all states of the northeast) to “identify” and resort to Assam Rifles to “deport” them back to Myanmar.

Such action is called “refoulement” in the 1951 UN Convention on the Status of Refugees, and is outlawed. But, say apologists for Modi-Shah, we are not signatories to this convention, or the protocol added in 1967 to make the convention less “Euro-centric”. To these pettifogging and irrelevant objections, Chief Minister Zoramthanga replies—as he did in his letter dated March 18 to the uncaring Modi—that “a humanitarian crisis [is] unfolding… in our own backyard” involving “the Chin communities who are ethnically our Mizo brethren”.

Modi-Shah remains unmoved because the Chins are not Hindus. When Tibetans in their tens of thousands entered India, did Nehru check whether they were Buddhist or Hindu? Or, did we check whether ten million Bangladeshis fleeing East Pakistan in 1971 were Muslim or Hindu? Or, whether those fleeing Afghanistan into India were Sikh or Muslim? Or, Tamils fleeing Sri Lanka were Hindu or Christian? It was not any UN convention, but the inherent humanitarianism written into our Constitution that gave these persecuted people refuge and protection from “refoulement”.

That is what makes it imperative that Modi-Shah find a humanitarian, non-sectarian approach to desperate refugees from Myanmar, extending to both the Christian Chin and the Muslim Rohingya. The United Nations High Commissioner for Refugees in a recent assessment has noted that “a rise in racism and xenophobia have undermined the tradition of tolerance in India”. Could anything be more shameful?