Mani Shankar Aiyar: Sasikala will make an announcement after May 2

When V.K. Sasikala was released from jail in Bengaluru, she feistily decided to travel by road to Chennai. The journey was a political triumph. All along the route were cheering crowds on both sides, enthusiastically welcoming back their prodigal aunt—“Chinamma” or younger amma. They greatly delayed her progress, as she herself had so often witnessed their delaying her beloved friend. She reached Chennai hours late, even as Amma [J. Jayalalithaa] herself had so often arrived late, exhausted but her spirits buoyed by the prospect of victory.

There were, however, no smiles, only scowls on the faces of the chief minister (EPS) and his deputy (OPS). They poured scorn and cold water on their erstwhile patron, complaining that she had no right to display the two leaves symbol and the name of their party on her car as she had been expelled from even the primary membership of the AIADMK. She airily dismissed the charge. 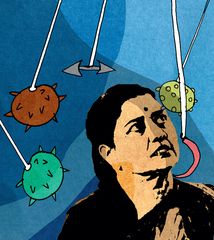 There was, however, no groundswell of support for her among MLAs or other high echelons of the party, despite the cadres having so clearly demonstrated their continuing commitment to their Amma’s favourite companion. The MLAs were preoccupied with proving their loyalty to current leaders to not risk losing tickets to fight their seats once more. As for EPS and OPS, they did not want to face a challenge to their hard-won leadership with assembly elections around the corner. Their relief must have known no bounds when Sasikala abruptly, and unexpectedly, announced her withdrawal from active politics. Why did she do so?

Let it be noted that she took her time making this startling announcement. She needed the time to assess her prospects within the AIADMK; within her nephew, T.T.V. Dhinakaran’s wobbling outfit; and within her family. Clearly, it was because she judged the moment to be unsuitable that she decided not to strike for the top slot right now.

I do not believe for a moment that there is any finality to her decision. I think she has correctly assessed that the coming elections will herald the defeat of the EPS-OPS led party, probably resoundingly and hence definitively. She realises that the right moment to make her bid to come in would be when the party is looking in defeat for an alternative leadership and alternative allies.

While the DMK alliance is all set to carry away the trophy, her nephew’s party has failed to get kick-started despite Dhinakaran having won Jayalalithaa’s seat of R.K. Nagar in a sympathy wave. Why go down separately when she does not wish to go down collectively with EPS-OPS? Much better to wait a while, have no responsibility for the coming reverses to the AIADMK-BJP, then rouse the cadres, who are and will remain with her and then take a shot at leading her party to victory five or ten years from now?

Moreover, her brother, V.K. Dhivakaran, appears to have advised her not to align with the sinking ship that Dhinakaran has floated. By a moment’s patience, she could reunite her party, reunite her family and decide herself, and not by political inheritance, whether to accept dominance over her Dravidian party of the looming shadow from Aryavarta. She has age on her side; charisma on her side; Amma’s blessings on her side; and she is not burdened by anti-incumbency. Moreover, her opponents in the party can no more than hint at her being a jailbird because she is one only to the extent that their revered Amma was almost one.

I think we will be hearing from Sasikala soon after the assembly election results are announced on May 2. Watch this space.