Put out the petrol fire

In May 2004, to my astonishment, I was asked to take over the petroleum portfolio. It was not till I signed up that I realised what a can of worms I had stepped into. For world crude prices had topped $28 per barrel, and we would be obliged to raise retail prices across the board for everything from kerosene to LPG, and petrol to diesel. My colleagues and I set about trying to answer the aching question by trying to be fair to all concerned: the consumer; the upstream oil exploration companies; the downstream refining and marketing companies; the Central and state governments, both of whom were heavily dependent on their revenue stream from duties and cess on petroleum products; and only then turn to retail prices. We were conscious that in a system of administered prices, the government has to be answerable to the public for any significant rise in retail prices.

We came up with the doctrine of “equitable burden-sharing”. Within a fortnight of taking over, I addressed a televised press conference to explain the administered price rise. I took full responsibility for the rise, which I justified in terms of how the burden had been distributed among different stakeholders. The Central government had taken a major hit by sensibly reducing Central excise duties. The upstream exploration companies, principally ONGC and OIL India, had taken a hit by deepening the deductions they offered to downstream refining and marketing companies. The refining and marketing companies, principally Indian Oil Corporation, Hindustan Petroleum and Bharat Petroleum, had taken a hit by being denied much of the increase that the market would have granted them. Of course, there was little the Centre could do to rein in state excise duties beyond appealing to chief ministers. And, only then, had we raised administered retail prices while continuing our commitment to increased subsidies on the two petroleum products that the poorest consumer most required—kerosene and cooking gas. The people of India, by and large, saw the justice of the move. 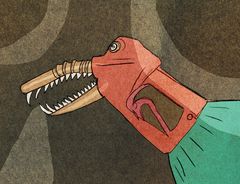 The current establishment has sought to escape its responsibility for social justice by abandoning administered prices in favour of market prices. But as the base price of petrol is only Rs29.30 per litre and for diesel Rs30.55 per litre, it is taxes, duties and cess—all of which are “administered” by the government—that make up about two-thirds of the final price. So, about two-thirds for the price the consumer pays is not to the market but is what the government mulcts him of.

The scandal has been put in perspective by my successor in the ministry, Veerappa Moily who, in an article in The Indian Express (February 23, 2021), has pointed out that when world crude prices ruled at $108 per barrel in 2012-2013, petrol in India sold at about Rs66 per litre and diesel at around Rs49 per litre. Now that crude has plummeted to $64 per barrel compared with 2012-2013 when Moily was in office, petrol is running at Rs91 in Mumbai and diesel is only a whisker behind. Why is the consumer being so unfairly burdened? Only because of the Central government’s greed.

The only way forward is by returning to the doctrine of equitable burden-sharing enunciated nearly two decades ago.