That famous phrase-maker, the prime minister of India, has done it again. He coined the expression “andolanjeevi”—those who thrive on protests—in the context of the farmers’ three-month-old siege of Delhi that has captured the attention and admiration of all of India. Alarmed at the adverse reaction to his jibe, he attempted to clarify the next day that he was not referring to the farmers at all, but to the “professional demonstrators” who are to be found attending every rally whatever the cause.

This sounded rich coming as it did from the mouth of one of the most successful andolanjeevis ever, who has clambered to the top rung by rung on every agitational ladder since he launched himself as a young adult in the Navnirman movement in Gujarat. Public demonstrations of dissent are the essence of people’s participation in any democracy. But agitators can gather the populace only by taking up issues that are agitating the public mind. What the prime minister does not seem to have realised is that if he and his home minister continue to spread outrage by misunderstanding their parliamentary majority to mean that they have acquired the right to do whatever they will without listening to the people, the people affected will give expression to their dissent by taking to the streets and squares. And the andolanjeevis will rush to their support.

This is true not only of India but of every democracy from the US and the UK to Nepal and Pakistan. It is also true of authoritarian regimes, as we are currently witnessing in Russia and Myanmar. And, all over the world, the worse the violation of human and political rights, the more is it likely that groups will form to protest against justice being denied. Hence, the Medha Patkars and Shabnam Hashmis that Modi seems to have had in mind. And hence also the Rihannas and Gretas who have succeeded in getting the goat of the professional diplomat who has placed his many talents at the disposal of hyper-nationalism. Why, when a mob invaded Capitol Hill at the behest of the former president of the United States, even our self-righteous prime minister condemned this attempt at thwarting democracy. 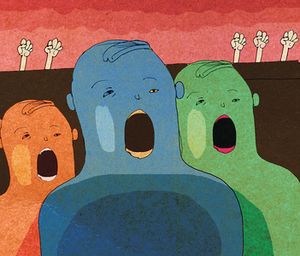 And, what are concrete barricades on the roads that lead to the nation’s capital, and spikes and nails to forestall free movement, but attempts to thwart democracy? And, denouncing the men, women and children gathered as Khalistanis, Pakistani agents, anti-national subversives and worse?

If, as the prime minister stressed in Parliament, the government is indeed so confident of its stand that the farm laws only add to sales choices for the kisan without diminishing any current option, what stands in the way of reaching out to dissenting farmers who have such serious apprehensions about what the government is up to? Or, allowing the normal processes of legislation that begin by referring all but routine, non-controversial bills to standing committees empowered to call in witnesses such as those now stranded for a hundred days in makeshift tents on the borders of Delhi?

Why not allow a free discussion in Parliament before passing bills, instead of only after the bills are faits accomplis? Why rush through such key structural reforms amid a pandemonium? Why deny the right of members to demand a division even when they know the numbers are stacked against them?

If the government tramples on democracy, democracy will avenge itself through andolanjeevis. They are the vigilantes of the people’s constitutional rights.