Shooting from the lip

Union Law Minister Ravi Shankar Prasad (The Indian Express, September 10) has availed of the death of Kesavananda Bharati, seer of the Edneer Mutt in Kasaragod, to serve up the usual hindutva cocktail of distortions, misreading and blatant lies.

The blameless seer was only challenging the Kerala High Court judgment which threatened to deprive his mutt of several acres of highly remunerative land. But it left the swami, the hero of a landmark 1973 judgment by the Supreme Court, which said that the “basic structure of the Constitution” could not be altered by Parliament. 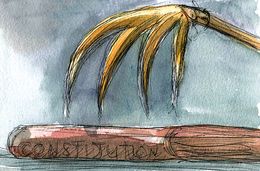 It is true that prime minister Indira Gandhi had tried to get that doctrine reversed by engineering the appointment of a junior judge as chief justice of India over those who had served longer. That did her no good at all because, as Prasad admits, the ruse was “unsuccessful”, and the doctrine holds as good today as when it was pronounced nearly 50 years ago. This despite the Congress having enjoyed “brute majorities” for 31 of these 47 years.

Why flog this very dead horse when Ravi Shankar and the object of his adoration, Prime Minister Narendra Modi, are misusing their current “brute majority” to undermine—as closely as they dare—the basic structure which enjoins them to uphold secularism and ensure fraternity in a multi-religious India?

Ravi Shankar has a fleet of experts to advise him on matters of jurisprudence. Perhaps he should have consulted them before flying in the face of a 2001 Supreme Court judgment in vilifying Rajiv Gandhi for having the 1985 Y.V. Chandrachud judgment on Shah Bano case “nullified by a questionable law passed by exercising a brute majority, purely for a vote bank”.

That law, which lay people call the Shah Bano Act, was challenged in the Supreme Court in 1986 by a member of the selfsame “vote bank”, a Muslim, Danial Latifi—a far more distinguished lawyer than Ravi Shankar is or can hope to be. Latifi was one of the most eminent jurists that independent India has seen. His arguments were not the piffle of Ravi Shankar’s polemic but the sober and considered thoughts of a well-versed expert in constitutional law. His petition was so compelling and so complex as to require a Constitution bench of the Supreme Court to deliberate on his arguments for a good 15 years.

On September 28, 2001, that is nearly two decades ago, the Supreme Court pronounced its final verdict. It held that far from being a “questionable law”, as Ravi Shankar labels it, Rajiv’s Gandhi’s initiative had—I quote from the judgment—”actually, and in reality, codified what was narrated in the Shah Bano case”. The Constitution bench further held that “the provisions of the Act do not offend Articles 14, 15 and 21 of the Constitution.”

The Supreme Court particularly commended section 3 of the Muslim Women (Protection of Rights on Divorce) Act, 1986. That extremely cleverly-worded section, drafted by Ashoke Kumar Sen, a law minister far more learned than Ravi Shankar, provided for “reasonable and fair” provision to be made and paid within the period of “iddat” (The 90-day period of separation from the husband to ensure that the woman neither has sexual relations with her husband nor is pregnant). This meant the financial provision was not for sustenance during the 90 days of iddat but had to be “reasonable and fair” for all of her life, and payable within that 90-day period.

The law minister hardly needs reminding that this final pronouncement was made during a BJP regime. Is his rant in keeping with his empty boast, “We are proud of the extraordinary legacy of the Supreme Court”?