I suspect that if someone were to take a poll of editors, TV anchors, columnists and BJP activists, as well as armchair critics and NGO jholawallahs, 95 to 100 per cent of the respondents in each category would say the only answer to the revival of the Congress lies in removing the Gandhi family from the stewardship of the party. If the same question were put to Congress workers in a similar poll, I suspect 95 to 100 per cent of the Congress would reply that only under the leadership of one of the three available Gandhis—mother, son or daughter—would the party be able to revive itself. 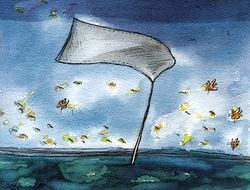 I think the sangh parivar recognises that the Gandhi family are the principal obstacle to a “Congress-mukt Bharat”. They recognise, too, that their ultimate goal can be achieved only by first fostering a “Gandhi-mukt Congress”. Hence, the training of their sights on not just the three surviving Gandhis but relentlessly on all five generations of the family. The only Gandhi in five generations to have not held the post of Congress president is Priyanka. At just about 50 years, she has at least 30 to 35 years ahead of her to show her mettle.

In bringing into perspective this fundamental difference between the bulk of public opinion and the view from within the Congress, my aim is not to make excessive claims in favour of the three remaining Gandhis. It is to point out that the shortcomings identified in the family—including the five to which Ramachandra Guha has drawn attention—are all valid to at least some extent. But these are assets, such as speaking Hindi fluently or speech-writing skills, that can easily be hired by the leadership from within its eager following. There is no lack of Jairam Rameshes.

The one indispensable qualification that cannot be outsourced is the charisma required to keep the flock together. That is a possession unique to the Gandhi family. That was again in evidence at the last meeting of the Congress Working Committee. A consensus was reached with no blood on the floor. So long as vengeance is kept at bay, the consensus will last. Unity, the prerequisite for revival, will be maintained. Revival itself will depend on constructive accommodation of constructive suggestions.

For we have seen that when the Gandhis are not there, as in the eight years of P.V. Narasimha Rao and Sitaram Kesri, the party splinters. And, if it splits when they are there, as under Indira Gandhi, the bulk of the party remains with the still centre while those who exit go straight into the dustbin of political irrelevance or, at best, find themselves confined to their regions. Thus, Sharad Pawar, who could arguably have been prime minister of India, is confined to Maharashtra and Mamata Banerjee, who might also have had an all-India profile, is caged in West Bengal. No more can a fish survive out of water, or a bird outside a cage, than can a Congressperson survive out of the Congress.