The Prime Minister of Singapore, Lee Hsien Loong, in an article in the highly reputed American journal Foreign Affairs (June 4), and Steve Bannon, Trump’s ideological foghorn, in an interview to the island’s most important English-language daily journal, The Straits Times (also June 4), have set out the parameters within which India, more than any other country in Asia and perhaps the world, needs to determine how it is to react to the cold war between the United States and China now being brought to a boil.

Bannon may have been relieved of his key office in August 2017, but no one else is as frank, brutal and faithful an exponent of Trump’s ideology. Bannon argues—no holds barred—that China and the US are not in a cold war but a hot war: “It is a hot war right now and it is going to get a lot hotter.” Underlining that the US is “in full-scale economic war with the Chinese Communist Party”, he predicts with grim satisfaction that the two countries will be in “a kinetic war in a couple of years”. And, he adds that, apart from the South China Sea, this war is going to happen “on the border of China, Pakistan and India”. We cannot complain that we have not been warned.

Prime Minister Loong, more soberly but with deep conviction, draws attention to the geopolitical reality that Asia “live(s) at the intersection of various major powers”, and, therefore, “must avoid being caught in the middle or forced to make ‘invidious choices’”. This, from a Singapore that, in sharp contrast to India in the 1960s and 1970s and way into the 1980s, did make the “invidious choice” of lining up with America in the thick of the Vietnam War and its Cambodian aftermath. Singapore was the most avid supporter of the horrendous Pol Pot regime.

Singapore prime minister now recognises that if either China or the US attempts to force a choice between them on other Asian countries, it will lead to a “course of confrontation” that “will last decades” and put the “long heralded Asian century in jeopardy”. Recognising that the US in Asia is a “resident power” while China is “a reality at our doorstep”, Loong also notes that “the strategic basis of Pax Americana has shifted fundamentally” making this “a painful adjustment” for the US. He warns that “if the US seeks to contain China’s rise” (as Bannon, on Trump’s behalf, so strongly advocates), “it will risk provoking a reaction that could set the two countries on a path of decades of confrontation”. 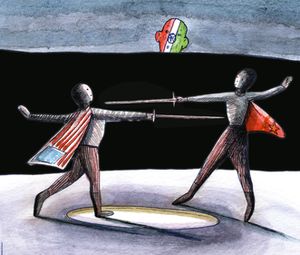 We were able to sit out the US-Soviet Union Cold War on the side lines because had armed confrontation broken out, it would have been on the battlefields of west and east Europe. Now, the reassertion of nonalignment as a fundamental creed of our foreign policy is urgent. Because Bannon has made explicit what has been an unstated or, at any rate, an understated goal of US foreign policy for the past two decades—co-opting India as a military partner of the US in a war to be fought on Indian soil to rein in the Chinese rise to global power status, even as the ability of the US to maintain its unipolar hegemony declines precipitately.

Bannon, emphasising that he is the chairman of something called the “Hindu Republican Coalition”, concludes his interview proclaiming that as “Modi was Trump before Trump”, it is India that is “the key that picks the lock”. Only thieves “pick locks”. Do we really want to be the American cat’s paw in this looming “kinetic war”, by becoming the field of battle of the Third World War?