As I drove to Poonch from Jammu, I was met with a fusillade from Salil Raina, a columnist for Poonch Today, that retailed all the lies about me being assiduously spread by the BJP’s propagandists. He demanded to know why, as one “having a history of indulging in “pro-Kashmir” and “anti-PM Modi rhetoric”, I was invited to speak at a seminar on communal harmony organised by Khalil Banday, founder-president, A.P.J. Abdul Kalam Human Welfare Foundation. Ominously, the article said “highly-placed sources” had told the journal that for this reason “this function is already under the radar of agencies”.

My welcome at Poonch was the very opposite of the dire warning that Raina’s column had aimed at me. Warm, affectionate and most embarrassed at the Poonch Today article, my multi-faith hosts took me through the extraordinarily touching story of this district, barely four kilometres from the Pakistan border, bounded on three sides—north, west and south—by the Line of Control. 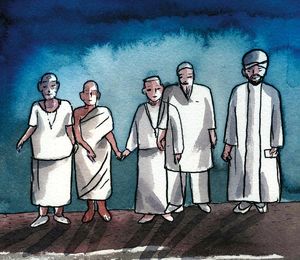 The city was subjected to relentless attack by both tribal mercenaries sent in by Jinnah in October 1947 to forestall the merger of the J&K Riyasat with the Union of India, and then by Pakistan army through most of 1948. Indeed, rather more than two tehsils of Poonch district remain under the illegal occupation of Pakistan. Yet, it remains a haven of peace and communal harmony, so much so that I began my speech next morning to a houseful audience of Muslims, Hindus and Sikhs by asking why I had been invited to teach them about communal harmony when they were a living example to teach me, the state and all of the country everything that one needs to know on the subject.

Indeed, it is not adequately known in the rest of the country that the shrine of Boodha Amarnath, a few kilometres upland from Poonch city, is surrounded by an exclusively Muslim population who have carefully preserved the shrine. They have devotedly looked after it for seven decades and are proud to extend a very warm welcome to the Hindu pilgrims who throng the small town of Mandi, where the shrine is located.

Although a major development project—the revival of the Mughal Road—is going to slash the distance from Poonch to Srinagar by nearly 300 kilometres, it causes some concern for local residents as it brings terror-hit south Kashmir within striking distance of Poonch. Will Poonch-Rajouri hold out while New Delhi shuns the route of “uninterrupted and uninterruptible” dialogue?

During the Manmohan-Musharraf period (2004-07), when India and Pakistan were engaged in constructive talks on Kashmir through their respective interlocutors—Sati Lambah and Tariq Aziz—our security forces took advantage of the tranquillity on the ground to completely wipe out every trace of terrorism in the region. So effectively did the relative peace between the two countries facilitate the operation that the Hurriyat now exclaims in despair, “Hamari kamzori (our weakness), Poonch-Rajouri”. The advocates of violence and terrorism wail that the peace-loving Poonch-Rajouri is their Achilles heel.

Thus, this region sets the example for Delhi to understand how favourably the resumption of dialogue with Islamabad will facilitate Kashmir’s return to normalcy, and how the different communities of the state, constituting a palimpsest of Muslims, Hindus, Sikhs and Buddhists, can and should live together in amity and mutual cooperation.