Reunion Island: A potpourri of experiences 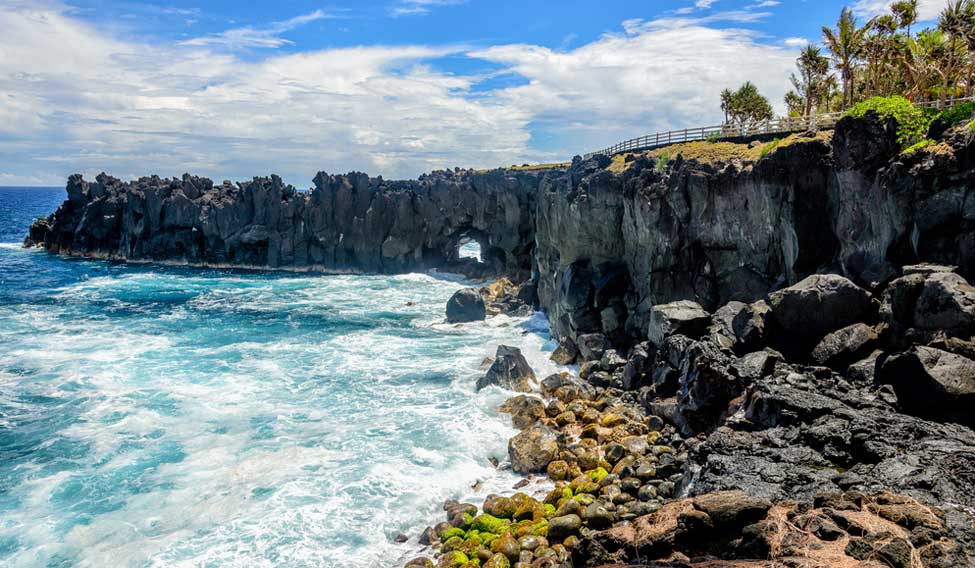 I confess I had never heard of the Reunion Island before I visited the country. While looking up the place I was surprised to find that the island is an overseas department of France despite being 9,386 km away from Paris. So, naturally I was both excited and intrigued to find it, and when I returned from the island, I came back amazed by its biodiversity, food habits and most of all, the natural vistas it offers.

With exceptional natural environment and assets, it is no surprise that about 40 per cent of the island is a UNESCO World Heritage Site. Amidst the scenic landscape is one of the world’s safest active volcanoes, Piton de la Fournaise, with over 150 recorded eruptions. The stunning natural beauty of the pitons, cirques and remparts, together with the deep ravines, torrents, pools and waterfalls make for a jaw-droppingly beautiful landscape. The road to the volcano is best visited in the morning, before the clouds cover the volcano. The drive is particularly beautiful and offers ample opportunities to spot some native birds such as the Barau’s Petrel, Flaming Red Fody or Cardinal, Marsh-Harrier, Grey White-Eye, Stonechat, Mascarene Paradise-Flycatcher, Bulbul, Olive White-Eye and White-Tailed Tropicbird, among others. There are a couple of vantage view points en route to the mountain. You could trek to the crater, if you are up for it. The trek would take you through some outstanding views, but it can get quite damp due to the rains that are commonplace here. The trek is not an easy one as the path is strewn with small rocks and pebbles, so make sure to carry walking shoes with a good grip. On the way back, stop at the Cité du Volcan Museum in Bourg-Murat. The museum introduces you to the volcano and traces its journey through several exhibits, audio-visual clips, and interactive screens that explain everything you want to know about volcanoes. Also, halt at Cap Méchant to see lava flows marked as per the year of eruption. It is heartening to see small plants sprouting among the brown, hardened lava now. Church Notre Dame des Laves at Piton Saint Rose beholds the sight of solid lava that flowed down the volcano and stopped just around the church. 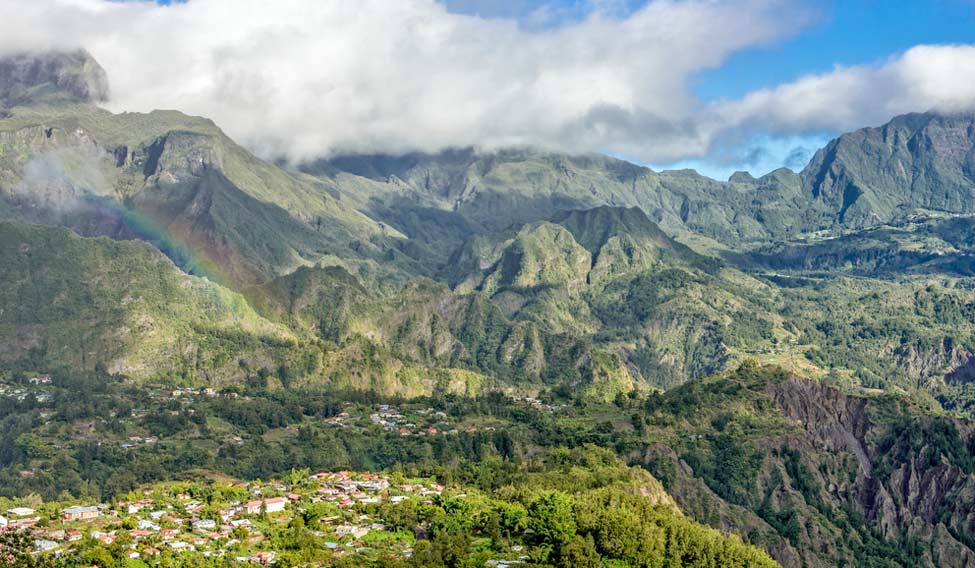 Hell-bourg from above in the cirque of Salazie, la Reunion Island

At the heart of the island are the three mountainous basins formed when the walls of Piton des Neiges collapsed to form the cirques of Cilaos, Mafate and Salazie. The drive to Cilaos, the southernmost cirque, has 400 stomach-churning bends through beautiful tree-laden hills. The town of Cilaos itself is a treat and is known for its spring water, thermal baths, vineyards and lentils. Mafate, the only cirque in the west, is accessible either by foot or air (I took a helicopter ride). A paradise for hikers, this is where you can backpack to see nature in all its pristine glory. Salazie, in the east, also has hiking trails, a mountain bike centre and numerous ponds, hugely popular among the locals. In fact, according to my guide, picnicing is the ‘national sport’ of the island. Yes, you read that right. This place is also known for its traditional architecture that has been preserved to precision. Also, the island has over 200 micro climates that allow you to hike, go horse-riding, mountain biking, golf, potholing, walking or just enjoy the beautiful coastal beaches.

One of the best things about the island is its denizens who are warm, friendly and ever smiling. As perfect example of how different cultures can live together, the island is home to the French, African, Indian and Chinese who all speak Creole. The strong Indian connect is hard to miss as we bumped into several people who traced their Indian roots to their grandparents and great grandparents. I was surprised to see several South Indian-styled temples here, that co-exist in perfect harmony with numerous churches and mosques here. My first-hand experience with locals include the instance when I unknowingly picked up a small plant and asked its price. I was told that it was not for sale, but the woman gave it to me as a present. The Creole cuisine is a mélange of influences that create a unique fusion. Interestingly, the staple food on the island is rice which is eaten with lentils, vegetables cooked with tomatoes, turmeric, garlic, onions and thyme, massalés made of goat or poultry in a spicy sauce of coriander, pepper, cumin, cardamom, nutmeg, clove, cinnamon, fenugreek and a chili base. The local food is similar to what we eat in India, except for the wider variety of meat used. Street food and food trucks can be found everywhere. Popular items include steam dumplings with pork or chicken filling called bouchons, samosas with a variety of fillings, sodas and the local beer called the Dodo beer. You may also indulge in widely-available sugarcane juice, as it is the main crop grown on the island. Interestingly, a lot of restaurants here offer vegan menu as part of the main food, so there is no dearth of options for vegetarians and vegans. The multi-layered experiences that I had there fills my heart with a sense of joie de vivre, making the Reunion Island both purposeful and fulfilling.