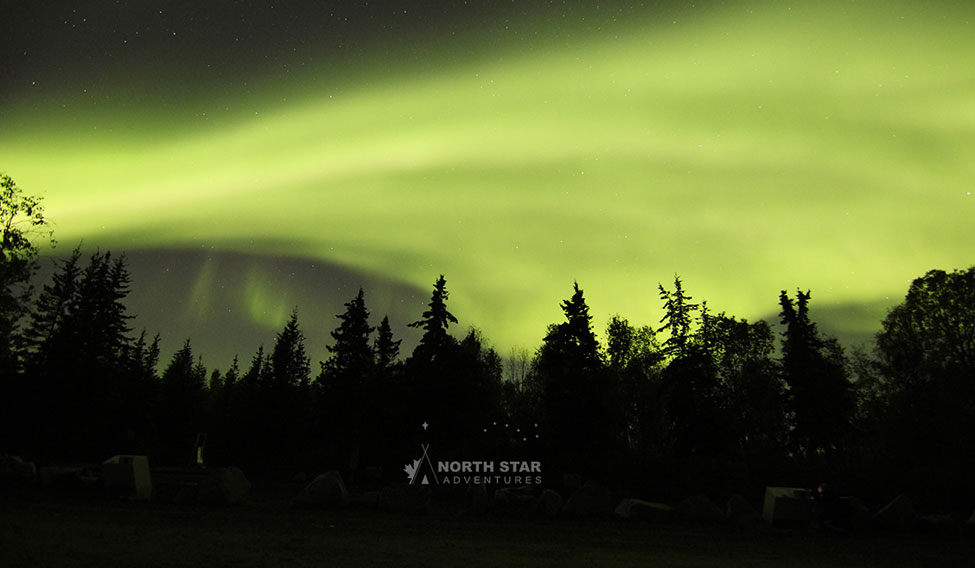 This autumn my son and I decided to travel to northern Canada, where the First Nations people—the indigenous people of the land—met with and fought the British settlers, in the 18th and 19th centuries. Eventually, peace treaties were signed and the two co-existed somewhat peacefully. Apart from the history that attracted me, I also wanted to watch the Northern Lights, or the Aurora Borealis, which peaks in the region, in the autumn and winter. My imagination had been triggered by the surreal pictures I saw on YouTube.

The North West Territories is a vast, but scarcely populated area. It is also one of the wealthiest in Canada with the discovery of gold, diamonds and oil in the past centuries, as well as its rich harvest of timber and furs, which were traded between the white settlers and the native population.

Swarms of swamp mosquitoes smashed against our windscreen as we hurtled at 100 kilometres per hour on the Mackenzie Highway. We skimmed past swathes of forests and bogs and vast tracts of burnt out trees that were victims of huge forest fires that rake the countryside often; the latest being the Fort McMurray fire that started in May 2016 and continued to rage till August this year, burning 25,000 acres of land. Eighty eight thousand people were evacuated in what is being called Alberta’s biggest wild fire evacuation in history.

We continued our journey to the town of High Level; so called because of its height that separates it from the Peace and Hay Rivers. Late at night, I witnessed a hint of the Aurora Borealis. It was my first glimpse and I was very excited. It was faint and green, like a light emitted from a UFO. We spent the night at a clean and comfortable roadside motel.

On the second day we exited Alberta and entered the North West Territories at the 60th parallel. This is the home of the First Nations people called the Dene.

We visited Alexandra Falls, which is part of a twin waterfall—the other being Louise Falls. It is a picturesque,105-foot tall fall. Dene folklore calls the twin falls the spirits of Grandmother and Grandfather, who protect the area. Kayakers Ed Lucero and Tyler Bradt are the only two to have successfully gone over the falls in their kayaks.

We drove into Enterprise, a hamlet with a population of around 120 people. It serves as a service and information centre for tourists to Yellowknife and Hay River, where we stopped for a hot dog and a petrol top up at Liza's Place & Gas Bar.

Eventually, we made our way to the hamlet of Fort Providence, where we caught the first glimpse of the mighty Mackenzie River. The river, like other rivers in the region, emanates from the Great Slave Lake. It is the longest river system in Canada and flows entirely through the North West Territories. It was named after the explorer Alexander Mackenzie, who travelled the river with the hope that it would lead to the Pacific Ocean, but instead reached its mouth on the Arctic Ocean, in 1789, calling it 'Disappointment River.’ Later, it was renamed in his honour.

Swarms of bugs rising from the river chased us back into our car. We crossed the river over the Deh Cho Bridge, which is the first permanent bridge to be built across the river that freezes during the winter. It was built in 2012, replacing an ice bridge and ferry.

Driving past a small lake, Chan, which is literally foamed at its mouth, we crossed over to Rae Edzo Arm Provincial Park, situated north-west of the Great Slave Lake, to photograph its ocean-like heaving, dark grey body.

The name 'Great Slave' came from the Slavey Indians, one of the Athabaskan tribes who lived on its southern shores at that time. Our trip, in fact, took us half way around this huge lake, on the northern tip of which lay our destination.

And finally, we arrived at our destination—Yellownife. We drove into the town, via its airport. We had reserved an Airbnb at the home of a young baker. His home was a compact trailer which was neat and cosy. I watched him bake his wholesome, organic bread and helped him clean up afterwards, while he packed it for the Sunday market.

Yellowknife is a medium-sized town with a middle class population, that is mostly employed in the service industry. Since I have a keen interest in indigenous crafts, shopping at the Gallery of the Midnight Sun was a sumptuous experience. The gallery sells First Nations craftwork, featuring traditional moose hair tufting, porcupine quill-work, as well as unique hand-knit fur garments and accessories. We also visited a museum that details the history of the people of First Nations and their chequered relationship with the white settlers.

We then moved on to the historical and well-preserved Legislative Assembly of the North West Territories, a unicameral body that was founded in 1870. Afterwards, we climbed up the hill to the Pilot’s Monument, that affords a stunning view of the city and its harbour. It has turned chilly, but that did not stop us from tasting the local beer. A pilsner, made locally in a microbrewery called NWT Brewing Company, turned out to be one of the finest beers I have ever had. After dinner, we went on an aurora hunt. There were many tour companies that offered different ways of seeing the Aurora Borealis, like tractors and dog sledges. We chose the traditional bus.

Though this is a right time for an Aurora display, one could never be sure, we were told. A group waited for two weeks but had to return disappointed. But we were lucky. Gaping at the sky while freezing in the chilly wind, we were treated to a spectacular sight—the sky opened up in great ripples of green and orange above us; like a giant and luminescent jellyfish, spreading its umbrella-shaped bell to the farthest reaches of the sky, it gave everyone goosebumps.

We stayed for three nights in Yellowknife, and then began our return journey. We drove past bogs and spotted bison herds strolling across the highway. We entered Fort Providence, on the north bank of the Mackenzie, with a fabulous view of the river. It had gorgeous waterfront trails and fantastic fishing. The local population of the Dene and Metis (of the Dehcho First Nations) is under 1,000. A historical town, its old name was given after a Catholic mission built a boarding house and an orphanage here. Its old-world church is still one of the most photographed buildings in the North West Territories. A few years later the Hudson Bay Company, Canada’s most famous fur trading company, which later became a retail giant, arrived and gave it the current name.

After lolling at the waterfront for about an hour, we crossed the Deh Cho Bridge again and took a detour to the town of Hay River.

The community there has a thriving fish market at Fisherman’s Wharf, that sells the catch of the day and has a maritime bazaar. Back at Enterprise, we grabbed a sandwich and gas again, at Liza’s. We spent the night in the same motel, at High Level. We hope to see the Northern Lights again and drive out to the country for a glimpse, but they are faint.

The next day we took a different route that would take us south to Peace River. The town is on two levels – on a hill and in the valley. We drove up the hill for a fabulous view of the river and the valley and to visit the grave of a trader who lived with the Beaver community of the First Nations people.

From there, the way back to Edmonton was dotted with prairies and farms, that are reminiscent of the farms of Punjab. We listened to Daler Mehndi, which seemed appropriate for this leg of our journey. En route, we crossed several pumpjacks, which are oil drilling machines that look like giant storks pecking at the earth, while drawing out bitumen from the soil.

And finally, we cruised towards the multicultual Edmonton, to dine off some hot and spicy kebabs downtown—a fitting end to a fabulous journey!