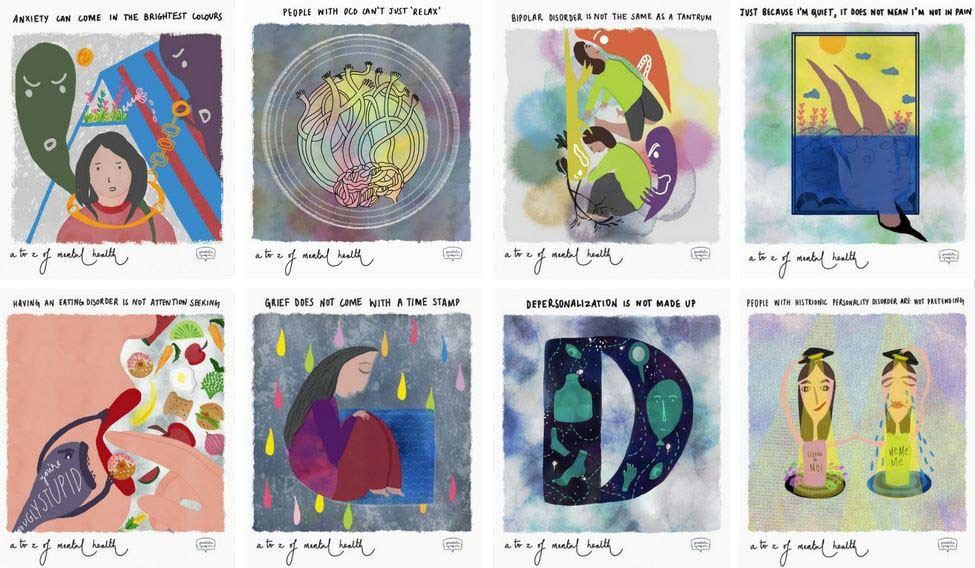 Picture this: a man washing his hands repeatedly, checking them, unsatisfied, and washing them again out of fear of contamination. This is a commonly perceived stereotypical image of a person with Obsessive Compulsive Disorder. “OCD is much beyond these common perceptions. It is about repetitive thoughts that muddle their heads. They feel so helpless because these loud thoughts are totally out of their control,” said Sonaksha Iyengar, a Bengaluru-based freelance illustrator, graphic designer and writer.

The series is part of the 36 Days of Type, a project which challenges designers and illustrators across the world to create something every day that revolves around each letter of the English alphabet, and numbers. Each artist is expected to create a series centred around a theme. Iyengar who has been struggling with her own share of mental health conditions, felt this is the theme she could personally connect to. “I wanted to create something tangible to initiate an honest conversation about mental health,” she said. The project started on February 21 and will go on till March 28.

Every day the young artist uploads an image on Instagram, which focuses on a specific condition and its first alphabet. From A for Anxiety, B for Bipolar disorder to lesser known conditions like C for Cotard delusion where the affected individual strongly believes that he or she is dead, Iyengar ventures into the wide spectrum of mental health issues. Through her work, Iyengar takes the liberty to experiment not just with medically diagnosed conditions, but issues that go unnoticed like jealousy, grief and insomnia. All of us go through these at some point in time, but we don't realise that these are also conditions that need to be addressed and spoken about, she said.

For Iyengar, this has been a deeply enriching process, both personally and professionally. She has been diligently researching online, reading extensively and keeping an eye on discussion forums to find the right condition to associate with each alphabet. She admits she is not an expert, and said she has tried her best, putting herself into the minds of these people to be able to creatively express their internal struggles.

“I didn't mean to make it look like I understood all of them, but it is an attempt to make them feel acknowledged,” she said.