Durga puja in Bengal with trans-boundary trysts and twists 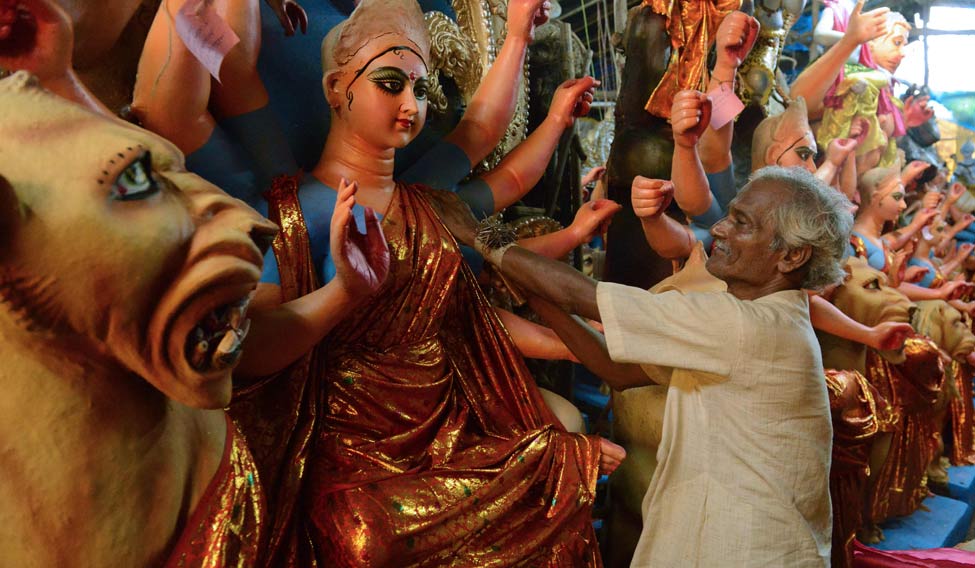 From goddess Durga draped in traditional Nepali attire for the grand celebration of Dasain, to the resplendent White Temple of Thailand to glimpses of London and the US — Durga Puja in West Bengal is not only a showcase of the state's artistic heritage but has also evolved into a platform of its cross-cultural and trans-boundary influences.

Geopolitical tensions notwithstanding, slices of soft diplomacy and globalisation are on show in a clutch of pandals (marquees) in the state.

Months of protests and violence in the Darjeeling hills has failed to dampen the spirit of the Nepali population in Siliguri (located at the base of the hill) and in state capital Kolkata where they are gearing up to celebrate the Nepali version of Durga Puja with pomp and splendour.

Recognised by the splotches of vermillion, rice and curd (tika) on the foreheads and the prominent sprigs of barley sprouts (jamara) tucked behind one's ear, Dasain or Vijaya Dashami — Nepal's biggest festival — has been observed in Siliguri for 25 years by its oldest social organisation, Bhanu Bhakta Samiti.

"Dasain is celebrated with the participation of all communities: Nepali, Bengali, Marwari, Bihari and others. Everyone is welcomed and people, cutting across political party lines, join in the revelry. The Bengalis even offer anjali' (floral offerings). The Gorkhaland issue is a political one and we do not let it affect our celebrations," Krishna Lama (Pemba) of the Samiti said.

"We have been having the Durga idol since the last three years. From sashthi (September 26), we will begin the worship of the protima (idol). She will be dressed in traditional attire and we have roped in designer Alka Sharma for the costumes. Jamara (pot with wheat sprouts) is indispensable to the festival," Lama said.

Parents and older members of the family apply tika and place the jamara as blessings for the younger ones. The jamara also signifies shakti.

In Kolkata, the Nepali consulate is expected to host around 100 to 150 members of the community from different parts of Bengal on Dasain.

"Every year, for over 25 years, we have a Nepali Durga puja in front of the Kolkata Municipal Corporation building. Cultural programmes are organised and representatives of around 32 samitis (clubs) across Bengal join in," an official of the consulate said.

Meanwhile, the Deshapriya Park committee, which registered the highest footfall for a pandal last year with five million visitors, has in store a slice of Thailand — a popular tourist destination for travellers from east India, served well with 2.5 hour-long flights.

It has recreated the 20th century Wat Rong Khun temple (or the White Temple) located just outside Chiang Rai in northern Thailand. The detailed all-white exterior with mirror trimmings stands out in stark contrast against the grassy park lawns.

At Bhowanipore 75 Palli puja in south Kolkata, a stone's throw from West Bengal Chief Minister Mamata Banerjee's residence, a 40,000 square feet area has been converted into a typical London street. The theme is aligned to Banerjee's vision of transforming Kolkata into London.

With 2017 being the Indo-UK Year of Culture, the club has tied up with the British Council and London Sharod Utsav.

"Big Ben and Westminster will also be replicated in the area. The idol is crafted from mahogany and brass and decorated with dokra art. Post-puja we are planning to install the idol permanently in any one of the famous institutions of the UK like the British museum or University of London," Club Secretary Subir Das said.

The Star Spangled Banner is prominent at Badamtala Asar Sangha in south Kolkata. The club is calling its celebration 'West Wind' in consonance with the Year of US-India Travel and Tourism Partnership.

"Visually the pandal resembles a street in a hi-tech American city at night. The design is complete with skyscrapers and multi-hued buildings and lights," said Snehasish, one of the artistic heads.