This is where presidents smile―eternally. The power corridor, which leads out from the president’s study, is lined with portraits of past presidents. President Zakir Hussain with his trademark glasses and a book; President K.R. Narayanan framed against a blue background; a smiling portrait of President Rajendra Prasad. President Pranab Mukherjee, seated in a chair in his study, is the newest member of this club; his painting has been displayed here since July.

Senior artist Vasudeo Kamath was selected to do the painting by a high level committee of experts, including the director of the National Gallery of Modern Art and the chairperson of Crafts Museum. “Kamath completed the painting in record time,” says a Rashtrapati Bhavan official. “We chose the study because the light there is golden and we thought it was appropriate to have the president sitting there for the portrait.” 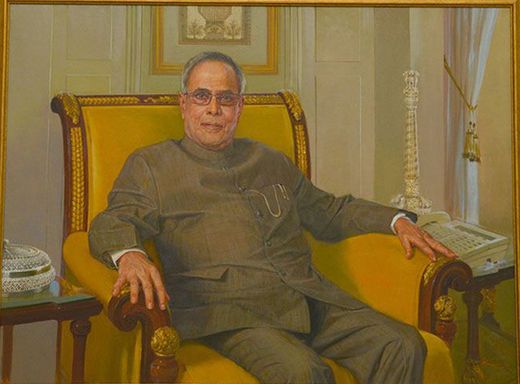 Kamath worked on the painting in his studio in Mumbai. “I had taken a picture of the president and I had that for reference,” he says. The finishing touches were given in the Rashtrapati Bhavan. This is Kamath’s first official portrait although he had earlier gifted President Pratibha Patil with a portrait of hers. Now, his signature mingles with those of artists like Gulam Rasool Santosh, Sanjay Bhattacharya and N.S. Subbakrishna who have painted leaders of the past.

“We had to wait for the monsoon to end before the painting could be transported,” says an official. “We had requested the artist to come and stay with us for a while in case something needed to be changed. But it was perfect.”

“The artist usually decides where to get the president to pose,’’ says the official. The portraits of presidents in all their glory have been displayed in the ornate Banquet Hall. President Abdul Kalam stands tall with his books and his Prithvi missile. Zail Singh is depicted by N.S. Subbakrishna as a prince in jhootis standing near a golden chair. Subbakrishna was also commissioned to make his half portrait but it was never completed, making Singh the only president to be only represented in life size.

While most presidents are surrounded by books, Dr Sarvepalli Radhakrishnan has been framed against a fictional background. He stands on a sandstone platform with a city spread out behind him. The artist, Svetoslav Roerich, son of the painter Nicholas Roerich, is the only one to choose the fictional world over the real one. No artist has been commissioned to do the full-size portrait of Mukherjee yet but it seems that the biggest names in the business are vying for the honour―an indication of how popular Pranabda is.