This winter will begin in the Rashtrapati Bhavan on a rather loud note. The house on the hill is all set to hold a rock concert in November. The Mughal Garden, Delhi’s most protected piece of green, will see three bands vying for Pranab Mukherjee’s attention. One of them is from Pakistan and another from Bangladesh. They will be performing a preview for the president before they open up the show for the public.

Concerts have started occupying a special place in the estate under Mukherjee. Each month, the Rashtrapati Bhavan opens up its doors to artists. Indra Dhanush―the estate’s own dose of culture―has brought the best, the brightest and the distinguished to perform before the president. There have been 30 performances since Mukherjee took charge. “The president hasn’t missed a single one,’’ says Siddharth Sharma, financial adviser to president who is in charge of Indra Dhanush. “He was moved by Aruna Sairam. He was also very happy by Malavika Sarukkai’s performance.” 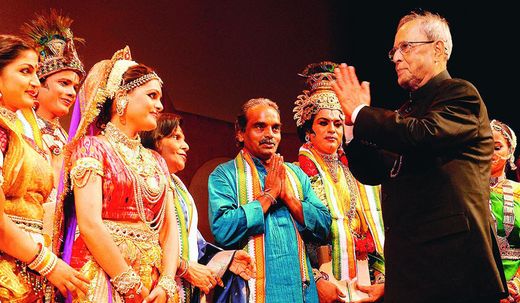 The concerts are planned carefully in advance and held in the auditorium in the evenings. It has been a diverse bunch of artists―from the Shillong Chamber Choir and Ao Naga Choir to Shubha Mudgal and Hariprasad Chaurasia. For young artists, it is an opportunity to be noticed. For veterans, it is yet another honour.

While music has always been a part of the fabric of the Rashtrapati Bhavan―musical soirees are common and pianos are scattered across the halls―the idea of institutionalising it came under Mukherjee. “It now has a new form, a new structure and a distinctive logo, the peacock, thanks to the vision of the secretary Omita Paul,’’ says Sharma.

Going beyond the realm of music, the Indra Dhanush series now includes dance, cinema and theatre. A book documenting its activities has been brought out in an effort to ensure that the experience goes beyond just the performance.

It was President Rajendra Prasad who started the tradition of inviting artists. Vilayat Khan, Ravi Shankar and Rukmini Devi were the first to be felicitated. The photo archives of the Rashtrapati Bhavan have thick albums of presidents with artists. The cultural outreach of the president was always taken seriously. And the Rashtrapati Bhavan became the people’s palace for artists to get encouragement. There is a story of Hafiz Ali Khan extracting a promise from President Prasad to “save Raag Darbari”.

Mukherjee, during his whirlwind kind of existence cramming in work to every minute, had not really had the luxury of watching movies. Thanks to Indra Dhanush, he has seen a few now. He even had a preview of Bhootnath Returns along with Amitabh Bachchan.

The concerts―or the performances―are more than just about a cultural dose. The president, as the head of the country, is also the patron of arts. Mukherjee takes this role seriously. “There has been an emphasis on forms that are under threat,’’ says Sharma. “The president has taken personal interest in reviving India’s rare art forms.”