AAP is relying on Patidars and diamond, textile workers in Surat

BJP, however, has the upper hand across Gujarat. 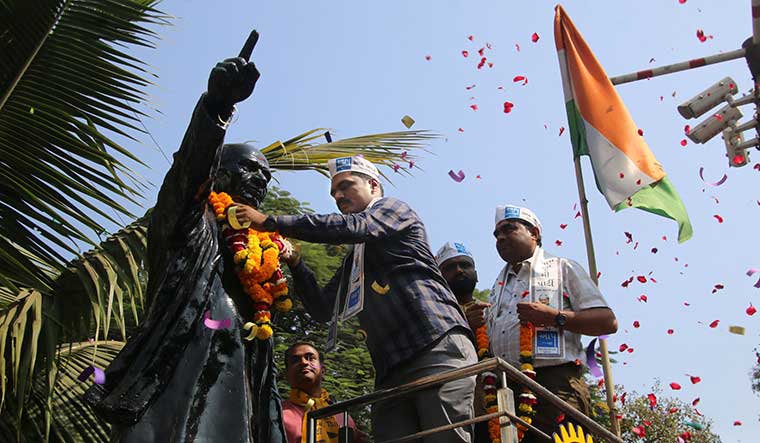 As one walks through the narrow lanes in Gulam Falia, Surat, it is easy to miss the Dutch cemetery, the final resting place of Hendrik Adriaan van Reede. Apart from his administrative acumen, the former governor of Dutch Malabar was also known for his botanical magnum opus, Hortus Malabaricus. Next to the Dutch cemetery is the Armenian cemetery. Both were lucky to survive the devastating floods of 2006. The British cemetery is only a few kilometres away. “These cemeteries tell us about Surat’s rich history. People from all over the world used to come here for trade,” said Sanjay Choksi, a photographer and history buff. The Surat port was famous worldwide and flags of 84 countries used to fly high here, giving it the name Surat Choryasi. And the prosperity still continues, with the city being India’s textile and diamond hub.

As Gujarat prepares to elect a new government, Surat is in the thick of action, with the city being home to state BJP president C.R. Patil and several other stalwarts. With a network of flyovers, new housing projects, an upcoming metro system and the tag of being the second cleanest city in the country, development is visible across Surat, and the BJP is quick to claim credit. “We have the triple engine government. The BJP at the Centre, state and the municipal corporation,” said Niranjan Zanzmera, the BJP’s Surat unit president. “Our brahmastra is Prime Minister Narendra Modi.”

Of the 16 seats in Surat―12 in the city and four in adjoining areas―the BJP lost only one in 2017. The electoral importance of Surat and south Gujarat can be gauged from the fact that Modi’s first meeting after the election was declared was at Kaprada in Valsad district. “We are aiming to win all 12 seats in Surat city and we will get the other four, too. Our focus is on increasing the lead,” said Zanzmera.

But it may not be an easy task, especially with the brewing resentment against the steadily climbing inflation. The Patidars are unhappy and so are those working in the diamond and textile sectors and the unorganised sector. Less than two kilometres from the BJP’s sprawling office in the city is where 62-year-old Devtadhin Dhobi works. A native of Raebareli in Uttar Pradesh, Dhobi is unhappy about many things, including the rising cost of cooking gas. An ironer of modest means, he paid Rs1,100 for a cylinder last month and wonders why the BJP government was unable to bring it down. The Congress has offered to make a cylinder of gas available for Rs500. “The railway season ticket which used to cost Rs300 now costs Rs1,700. Milk prices increase every two to three months,” he said. Development, in his view, is not just big stadiums, flyovers and statues. “I lost my house a couple of years ago for a flyover project. I had built it after struggling so much. I never got any compensation and now I stay at a rented place that costs Rs2,200 a month. It hurts,” said Dhobi.

Dhobi refused to reveal his voting preference, but observed that Delhi Chief Minister Arvind Kejriwal and his Aam Aadmi Party had made some solid points. “Kejriwal is talking about 300 units of free electricity per month and lowering the property tax. It has happened in Delhi and Punjab.” Though the AAP is seemingly not targeting any particular strata of society, the middle class, the lower middle class and the poor are attracted by the party’s campaign promises.

On a small lane in the city, Shobha Chauhan, 50, assembles necklaces. She gets Rs60 for a thousand pieces, but it is woefully inadequate to meet the needs of her family of six. So she also sells pan masala. “Nobody helps the poor. We are made to run from pillar to post and now the quantity of grain that we receive from the ration shop has also worsened,” she said. 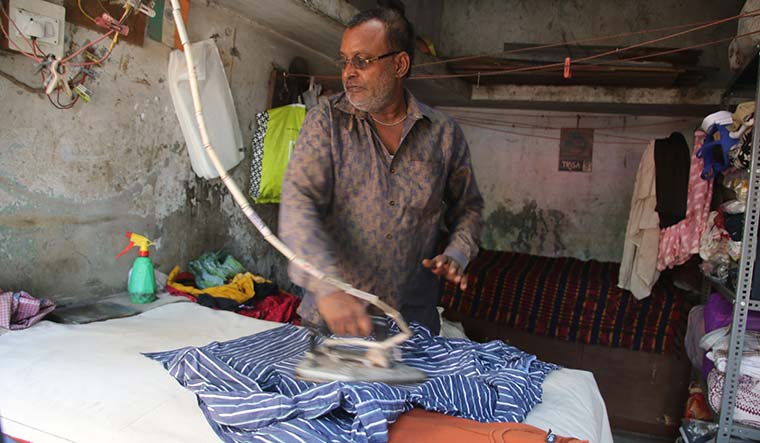 An indication of the challenge that the BJP could face in the city is evident from Varachha―also called mini Saurashtra―dominated by Patidars. Within two days of joining the AAP, Surat’s very own PAAS (Patidar Anamat Andolan Samiti) leaders Alpesh Kathiriya and Dharmik Malaviya took out a bike rally and were given a rousing reception. “Varachha is a hotspot,” said Pradip Jadhav of Chai Makers by Engineers. Jadhav, 46, who started his restaurant business with his 24-year-old-engineer partner Ganesh Dudhnale a couple of years ago, said the AAP did quite well in Varachha in the last Surat municipal corporation (SMC) elections, when the party surprised everyone by winning 27 of 120 seats. While the BJP retained power, the Congress, for the first time, failed to open its account.

Rakesh Hirpara, one of the key members of the AAP in Surat, said the party’s origins in the city could be traced back to 2013 when it started taking up issues like hike in power bills and property tax, and various alleged scams. During the first wave of the pandemic, AAP workers went from house to house with pulse oximeters to measure oxygen saturation levels of patients. The ones who needed attention were taken to hospitals. While the AAP’s initial electoral forays were unsuccessful, the last SMC elections brought in a change. “For the first time, women voters shifted in our favour. Normally, they vote for the BJP,” he said.

Rachna Hirpara, a first time corporator, joined the AAP barely a month and a half before the elections as she was moved by the problems faced by the common man. “I did not even know what a corporation was and what a corporator was supposed to do,” said Hirpara, who has studied only till class seven. She and her 12-year-old son, Swayam, undertook a door-to-door campaign, although her husband, Ankur, was not sure about her success.

For the upcoming assembly polls, the AAP was the first party to announce the list of candidates, and it relies heavily on the promises made by Kejriwal. The party tells voters that on the basis of the initiatives it announced in the fields of electricity, health, education and allowances to be given to the unemployed and women, a family will be able to save at least Rs2 lakh per year. Said Kiran Desai of the Centre for Social Studies in Surat, “Patels, who benefited from the land reforms, are a homogenous group. Yet, the results of the 2017 elections from Surat region were surprising.”

The AAP hopes that the work its corporators have put in at the SMC would translate into votes in the assembly polls. The party is eyeing voters like Shilpa Goyani and Kajal Gajera. Their families earn less than Rs20,000 a month and they used to find it extremely difficult to run their homes and educate their children. After the AAP representatives brought in changes in corporation-run schools, they enrolled their children in these schools and made big savings. Earlier, they used to pay beyond their means to keep their children in private schools. “There is corruption everywhere and we are made to visit government offices multiple times to get things done,” said Goyani and Gajera.

In the Patidar-dominated Varachha Road seat, the AAP has fielded Kathiriya, once a close aide to Patidar leader Hardik Patel, who switched over to the BJP from the Congress. Kathiriya, who was in jail for 14 months, also faced sedition charges. “I had offers from the BJP and the Congress,” he said, adding that he preferred the AAP so that he could join hands with the people in the struggle. “I am not afraid of the cases,” he said. The AAP’s Gujarat unit president Gopal Italia, meanwhile, is contesting from Katargam.

At the election office of Ram Dhaduk, the AAP candidate for the Kamrej seat, party workers are coordinating minor details for the upcoming rallies. Squatting on not-so-clean mattresses, their focus is to make use of available resources and manpower. The broken furniture and the electoral material strewn around reflect the chaos, but the mood is upbeat and the hopes are high.

The Congress has nothing to lose and any addition to its tally will be a plus. The party seems to have done its preparation well and has tried to come up with some good candidates. It is also making efforts to ensure that the AAP does not eat into its vote share, especially in those pockets that have been voting for the grand old party.

Gujarat Congress spokesperson Naishad Desai, who hails from Surat, said the party was hoping to win four to five seats in Surat and improve its performance in the adjoining areas. “People want change and they are fed up with the present government,” he said, and also alleged that Kejriwal was following in Modi’s footsteps. “It is like announcing that you will get Rs15 lakh in your accounts [like Modi did]. But you know these promises are never fulfilled.”