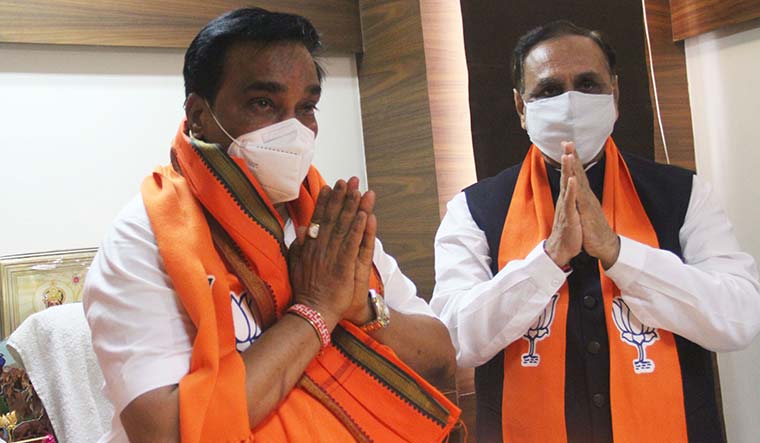 THE EASE OF DOING business rankings released on September 5 by the Union government’s department for promotion of industry and internal trade saw Gujarat slipping from fifth to tenth position. It has come as a big blow to a state already battered badly by the Covid-19 pandemic. The state’s response to the pandemic has faced a lot of criticism. The Gujarat High Court recently pulled up the state government for its alleged mismanagement of the pandemic and said the Ahmedabad civil hospital looked worse than a dungeon.

It has been a tough few months for Gujarat, which used to advertise its health care facilities to attract NRIs, and is known for its business-friendly climate and the biennial Vibrant Gujarat Summit, launched by Narendra Modi when he was chief minister.

Ever since Modi moved to New Delhi after a 13-year stint as chief minister, Gujarat has been slipping on a number of parameters. It has become a major headache for the BJP, which considers Gujarat its model state.

There have been rumours that Vijay Rupani, chosen by Union Home Minister Amit Shah to replace Anandiben Patel as chief minister in 2016, is on his way out. While that change is yet to happen, the BJP has appointed C.R. Patil, a three-time MP close to Modi, as the new chief of its state unit in the place of Shah’s protégé Jitu Vaghani. The appointment is seen as a warning signal to Rupani and his deputy Nitin Patel, with whom he shares a testy relationship.

Patil appears to have been given a clear brief as the Rupani government has fallen short on a range of critical issues including the response to the pandemic, agitations by Patidars and the OBCs, dalit issues and the controversies surrounding police recruitment and private school fees.

With Patil taking charge, it seems Rupani’s wings have been clipped. The new president meets party workers regularly. Despite appeals by the government about maintaining social distancing and avoiding rallies and processions, he organised two yatras—one each in Saurashtra and north Gujarat. Patil has now tested positive for Covid-19. Unconfirmed reports indicate that at least 130 BJP leaders and workers, too, have become infected. There are rumours on social media that the new BJP president turned out to be a superspreader.

What has further ruffled feathers within the BJP is Patil’s order that ministers should be present at the party headquarters in Gandhinagar to redress the grievances of party workers as Covid restrictions prevent them from visiting the secretariat frequently. Those who belong to other parties and those without any party affiliation are also allowed to meet the ministers at the BJP headquarters. Patil is also reaching out to BJP workers through an e-interface after Covid cases were reported from the party headquarters.

Not many within the BJP are happy with the new scheme of things. But unlike in the Congress, nobody is speaking out. A senior BJP leader told THE WEEK that forcing the ministers to function from the BJP office was unconstitutional. “Why give VIP status to BJP workers? And, why force Congress workers to go to the BJP office? Moreover, the ministers are being paid their salaries from the state’s exchequer,” he said.

Right wing ideologue Vishnu Pandya, however, said the move was a step in the right direction. “In the state secretariat, the entry is limited due to various reasons and the ministers are not able to reach out to many people. Moreover, the administration remains confined to GRs (government resolutions),” he said.

Political analyst Hari Desai said Patil had been given the “assignment of a super CM”. The way he organised a rally in Rupani’s home city, Rajkot, was a clear indication of the changing power equations in the state BJP. Desai said the new president might be able to arrest the worrying slide in the party’s fortunes, but his appointment was also indicative of disagreements between Modi and Shah. The way things are, in the upcoming byelections to eight assembly seats and several local body seats, Patil will be calling the shots.

Gujarat BJP spokesperson Bharat Pandya dismissed the allegations that Patil was brought in as a super chief minister. He said ministers were asked to spend time at the party headquarters to motivate ordinary workers and that such an experiment was undertaken in the early 1990s as well. “The government and the party complement each other,” said Pandya.

The opposition Congress, however, said Patil’s order to the ministers to get to the party office showed that its workers were not being heard. “The BJP is not listening to the common man or even ordinary party workers. Only influential people are being heard,” said Congress spokesperson Manish Doshi. “If Patil or the Gujarat government wants to listen to the masses, then they should open the doors of the secretariat to all.”