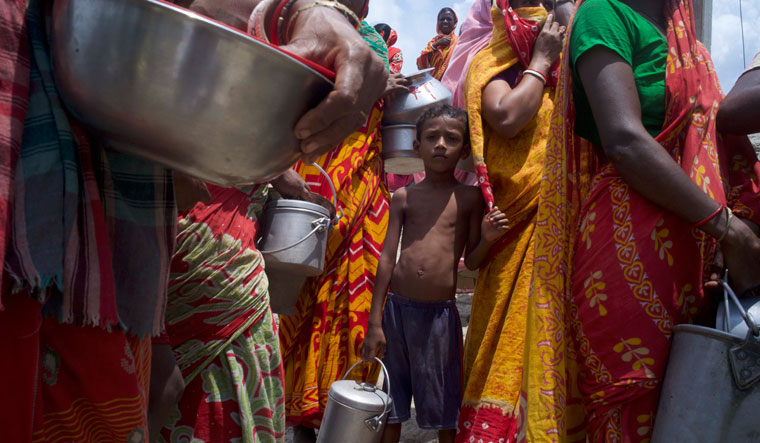 Lined up: Women and children assemble at a private relief camp in Sandeshkhali village to collect foodgrain

Just before the Lok Sabha elections in May 2019, Amit Shah, who was the BJP’s president then, claimed that his party would win 23 of 42 Lok Sabha seats in West Bengal. Chief Minister Mamata Banerjee said he was daydreaming. While it was clear that Banerjee and the Trinamool Congress were struggling with an eroding support base, her popularity had remained intact. No state leader of the BJP was a match for her, and she was pinning her hopes on this to sail through.

Banerjee, however, failed to see the undercurrents. A week before the last phase of the polls in Bengal, THE WEEK published a detailed report on allegations about Trinamool leaders in the western and northern parts of the state swindling state funds, and how this would affect the party in the elections. People were clearly upset with Banerjee’s party.

In the end, Shah almost pulled it off. The BJP bagged 18 seats and finished second in four by margins of less than 5,000 votes. More importantly, the results indicated that the party had a shot at wresting power from the Trinamool Congress.

The assembly elections in Bengal are only 10 months away, and things have not got any better for Banerjee. A large section of the people are unhappy about the relief distribution of Covid-19 and Cyclone Amphan. There are widespread allegations that the money has gone to many undeserved people who were close to the Trinamool. The resentment is so strong that many Trinamool leaders were beaten up and their houses ransacked in different parts of the state.

Banerjee, however, has been careful not to repeat the mistakes of the past, and has taken action against dozens of leaders. It is said that she is being advised by poll strategist Prashant Kishor. Many panchayat chiefs have been expelled and many others have been served show-cause notices.

In Hooghly district, Manoj Singh, the pradhan of the Garalgacha gram panchayat, was expelled on June 20. Singh had submitted a list of 166 people for Amphan relief—among whom were himself and his wife. He was asked to resign by the Trinamool district president Dilip Yadav. “When he refused to do that, we were left with no other option but to expel him on the grounds of corruption,” said a statement by the party. Yadav added: “Along with Singh, we have received a number of allegations against panchayat chiefs and members. All inquiries will be completed within a stipulated timeframe.”

Banerjee’s opponents, however, say this is just eyewash. “The chief minister’s punishments to her party men are laughable,” said CPI(M) central committee member Sujan Chakraborty. “Did she touch the big guns?” Banerjee’s crackdown has so far been limited to measures at the party level. No legal action has been taken against anyone. 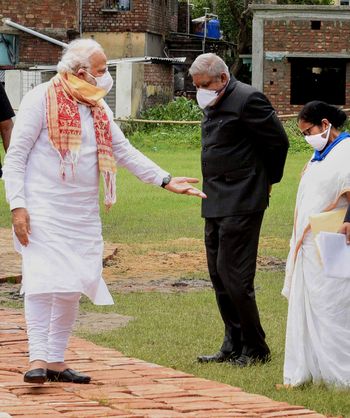 Taking stock: Prime Minister Modi with Governor Jagdeep Dhankhar and Mamata Banerjee during the review of the cyclone situation | PTI

Opposition parties allege that dealers were forced to divert foodgrain to the party’s relief channel. Food Minister Jyotipriyo Mullick denied the allegations. “No one in our party would be allowed to take relief materials meant for poor people,” he said. “Stringent action will be taken against them.”

A week ago, Banerjee called an all-party meeting to discuss the relief measures for Covid-19 and the Amphan cyclone. The meeting was attended by the leaders of the left parties, the Congress and the BJP. The chief minister wanted to create a committee and CPI(M) state secretary Surjya Kanta Mishra to lead it. But Mishra turned down the offer. A leader who attended the meeting told THE WEEK that Mishra told Banerjee that it was her party which had the mandate to rule. Banerjee agreed and made Education Minister Partha Chatterjee the head of the committee, which has Mishra, Ghosh and a few others as members.

Ghosh had initially resisted Banerjee’s proposal to make him a committee member. “I repeatedly told her that I could not be part of such a committee which has no locus standi,” he said. “Such a committee cannot work constitutionally. But the chief minister said she would empower the committee to take decisions on behalf of the government. I have never heard of such a scheme of things anywhere in India.”

He said the move is politically motivated. “The government is in the dock. The chief minister is becoming unpopular. So she wanted all of us to be part of that mess. Now she would go and campaign that she wanted to take everyone with her but the opposition refused,” he said.

Banerjee, for sure, has political motives, and her main goal is to stop her rivals from taking advantage of the volatile ground situation. The state has been witnessing many incidents of mob violence over relief distribution. The BJP said Trinamool party men were behind the violence. “They attacked our party men at different places when we reached there with relief materials,” said Ghosh. “We have to do this because the government has failed miserably.”

One of Banerjee’s intentions behind constituting the committee was to make a charter of demands to the Central government. She wanted Ghosh to be the bridge to the Centre rather than Governor Jagdeep Dhankhar. If Ghosh fails, she will be able to pin it on him and the BJP.

Dhankhar, however, has already created a report. “It is sort of a scam in the making,” he said. “Ruling party workers, though not entitled, got benefits, giving rise to protests and violence at many places.” He said he had advised the government to use proper channels to distribute relief money. “People complained to me that in the name of relief it is daylight loot and plunder by the ruling party workers with the support of the local administration.”

The Trinamool has been critical of the governor for not supporting the chief minister’s demands for more funds from the Centre for relief work. Banerjee has demanded a 010,000 crore package and requested the opposition leaders to jointly put pressure on the Centre for it. Dhankhar, however, denied that the government had proposed any such demand to him and said it was Banerjee’s political ploy. “I am all for a considered and deserved relief package for the state. For the chief minister, it is virtually a daily rhetoric with an eye on the political radar,” he said.

It remains to be seen if Banerjee’s new initiative is going to work. Especially because of the opposition leaders’ mistrust of her and their refusal to make any commitment. But her political game is certainly on.