Married to a multitude 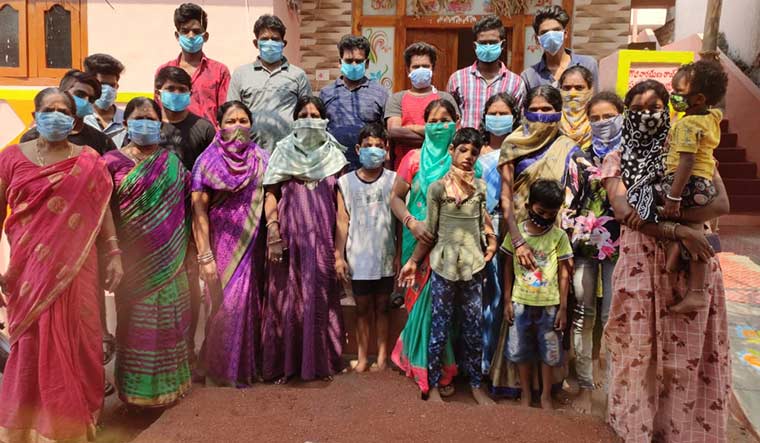 Wedding blues: Some 40 relatives of Mani Kumar are stuck at his house in Hyderabad.

ENTERING THE WEDLOCK surrounded by relatives can be a beautiful experience. But, entering an indefinite lockdown with 40-odd relatives stuck by your side not so much. And, nobody knows it better than Hyderabad resident G. Mani Kumar, 24, who got married on the evening of March 20, two days before the Janata Curfew Sunday.

Kumar resides with his parents in a two-room house, allotted under the Telangana state’s housing scheme for the poor, in an industrial area in Bolarum on the outskirts of the city. His parents earn their living as daily wage labourers in nearby factories, and he is a software systems engineer in a private company. The family hails from Paralakhemundi in Odisha’s Gajapati district. As the village borders Andhra Pradesh, many of its residents speak Telugu. According to Kumar, his parents migrated to Hyderabad two years after he was born.

A few months ago, his relatives found a match for him in his cousin, Devika. The bride’s family hails from a village in Andhra Pradesh’s Srikakulam district, which borders Odisha. A date was fixed, and relatives started pouring in from the two states. A few relatives arrived on March 19 and the rest on the day of the wedding. “I am not good at expressing my thoughts as I am reserved. All I can say is I am happy with the way my wedding took place,” said Kumar.

Appa Rao, a resident of Bolarum who attended the wedding, said it was an unusual wedding venue. “An empty plot outside the the groom’s house was decorated,” he said. “It was mostly a family affair; close to 100 people attended the wedding.” And, the celebration went on till midnight.

“All our relatives who had travelled from outside the state wanted to stay for one more day,” said Kumar. “There was an important function the next day (March 21). The plan was to see them off on March 22.”

But the Janata Curfew came into effect on March 22. And by evening, the Telangana government announced a lockdown. Kumar and his family were stumped. How would they accommodate their relatives in their 675sqft abode?

Recalling the initial days, Kumar said, “We had to adjust as we did not have any choice. Some slept on the terrace and a few others slept wherever they could find space.” But it was not easy making them feel at home. “They are part of our family. It is not appropriate to talk about how difficult it was to look after them,” said Kumar. “I can only say that our family has spent a good amount [on them]. Other relatives also chipped in.”

Also, the wedding gifts came in handy. “We got utensils and other household items like crockery as gifts. These are being used,” said Kumar.

The family also reached out to a few of their distant relatives who live close by and requested them to take in a few of the guests. But feeding and providing for so many relatives during a lockdown was tough. And so, about 10 days after the wedding, a few of the guests went to a police station with the wedding card and obtained permission to travel. They hired taxis and set off, only to return in a few hours. They were told that their vehicles would be stopped at the state borders.

It was back to square one for Kumar. Also, a few of the relatives were worried about their family back home. “Some of us have aged parents whom we left behind in the village,” said a relative. “A few members have travelled without spouses.” Since most of the relatives were from villages, they felt suffocated being cooped up in a house.

And then, the media got a whiff of their predicament. “We assembled outside the groom’s house and spoke to the media,” said Kumar’s uncle Kagesh. “We hoped that our plight might force the administration to send us back. The news played out, but in the end we were disappointed.”

Instead of giving them a travel permit, the police advised them against travelling. Speaking to the media, however, did help. Political leaders showed up with essential items including four quintals of rice, vegetables and oil.

Even as they spend time together, chit-chatting, reminiscing, cooking, even arguing or watching TV, Kumar’s relatives long to go home. But there is one person who is quite happy about this lockdown situation. “I think my wife is happy about what is going on,” said Kumar, who is now sharing his house with eight other people apart from his parents and wife. “She can meet and talk to her relatives daily.” Small mercies!