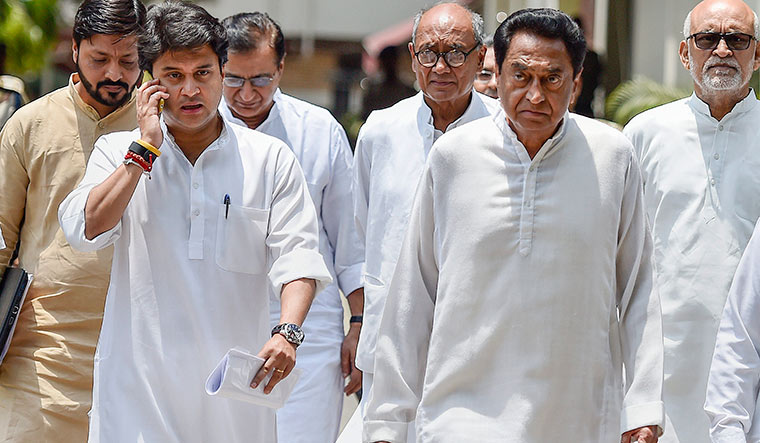 Hostile act: Scindia’s relations with Nath and Digvijaya have deteriorated of late | PTI

IT WAS A WEEKEND of high drama in Madhya Pradesh. The Congress was expected to name a new chief for the state unit of the party by September 1, relieving Chief Minister Kamal Nath of the twin responsibilities he has been handling for the past eight months.

But as the weekend drew to a close, it was clear that the appointment of the Pradesh Congress Committee (PCC) chief was deferred, once again. Amid the confusion that prevailed, one thing was quite clear. Supporters of former Union minister Jyotiraditya Scindia were not giving up their efforts to get their leader elevated to the top post. As Nath flew to Delhi on August 30 to discuss with Congress president Sonia Gandhi the issue of the new PCC president, Scindia supporters came out openly demanding his elevation. Some of them threatened to resign if their demand was not met. Scindia chose to remain silent, although there were reports that he had given ‘an ultimatum’ to make him the PCC chief or else he would consider ‘other options’.

After his meeting with Sonia, Nath said the appointment of the new chief was deferred for the moment, as the Congress president wanted wider consultations on the issue. Deepak Babaria, Congress general secretary in charge of Madhya Pradesh, confirmed to THE WEEK that the appointment would take some more time. Scindia loyalists responded with a one-day protest in Shivpuri. Posters came up in Gwalior urging Sonia to elevate Scindia.

The pressure tactics clearly suggested that it was an attempt to warn the party to not write Scindia off in Madhya Pradesh, despite his shocking loss in the Lok Sabha elections. “All these moves are to ensure that Scindia’s relevance in Madhya Pradesh politics continues, despite the central leadership’s indication to the contrary,” said political analyst Girija Shanker. Political journalist Manish Dixit added: “It does seem that his supporters had Scindia’s silent approval or else they would not have been so forceful.”

Scindia, in fact, kept silent for a while. During similar situations in the past, he used to promptly issue statements saying he was a loyal party worker and would take up any responsibility assigned to him. This time, he waited till September 3 before telling journalists that “whatever the Congress high command decides will be acceptable” to him.

Congress media cell chief Shobha Oza said Scindia’s supporters were only trying to prove their loyalty. “Supporters want their leaders to get big posts. But the decision about appointing a PCC chief is with the Congress president. She will take a decision at the right time,” said Oza.

What further complicated matters this time were the rumours about Scindia crossing over to the BJP. While Scindia dismissed the reports as baseless, the BJP has been doing its best to keep the rumours alive. Political watchers, however, feel that Scindia is unlikely to make such a drastic move as he has age on his side and there are not many powerful young leaders in the Congress. Scindia himself reportedly said that the BJP usually sidelined prominent leaders who came from other parties. The rumours, therefore, could be nothing more than a ploy to stay relevant in the party, according to some observers. They said it was clear that the high command did not want Scindia to head Madhya Pradesh Congress. “If they wanted to give him the post, it would have happened immediately after Nath was made chief minister,” said Shanker. “Scindia would not have been given the charge of Uttar Pradesh or the announcement of his candidacy for the Guna Lok Sabha constituency would not have been delayed till the last moment. The central leadership does not want him to dabble much in Madhya Pradesh politics.”

Shanker said the appointment of the PCC chief was not a priority for the Congress leadership as the political situation in the state did not warrant that kind of urgency. He said the central leadership was wary about appointing scions of erstwhile royal families in key positions as it feared that they might ignore the high command once they were appointed to an important post. The experience with Punjab Chief Minister Amarinder Singh, who reportedly does not pay much attention to diktats from Delhi, might have influenced the high command’s decision.

Dixit said Scindia’s elevation would have been more likely when Rahul was Congress president as he was keen on promoting young leaders, but Sonia preferred to take different factors into consideration and would not want to create a second power centre in Madhya Pradesh by appointing a political heavyweight as PCC chief.

In the months following Nath taking over as chief minister, more than a dozen names have been pitched as probable choices for the next Congress chief. Former leader of opposition Ajay Singh, who is the son of Congress stalwart, the late Arjun Singh, had meetings with a number of MLAs and ministers at his residence for three consecutive days ahead of Nath’s trip to Delhi. Interestingly, former chief minister Digvijaya Singh is believed to be leading the Ajay Singh camp.

On September 4, Scindia spoke to the media about the rift within the party. He expressed support for Forest Minister Umang Singhar, who had criticised Digvijaya, alleging that the former chief minister was running a proxy government. He said Singhar should be heard and that external interference in government should be avoided. Scindia also criticised illegal mining in the state and warned that he would “step into the issue” if the government failed to tackle it.

The BJP has not missed the opportunity to take advantage of the divide within the Congress. State BJP president Rakesh Singh said the Congress and the government were totally confused. “They have no clue as to what they are doing or what they want to do,” Singh told THE WEEK. Kailash Vijayvargiya, the national general secretary of the BJP, tried to create further controversy by saying that while Scindia will stand by and watch from Uttar Pradesh or Maharashtra (he was recently appointed head of the Congress screening committee for Maharashtra elections), Digvijaya would walk away with the party chief’s post.

Oza, however, allayed concerns and said the Congress was not bothered by what the BJP had to say. “We know how their party functions and how ours does,” said Oza. “So we are not bothered.”