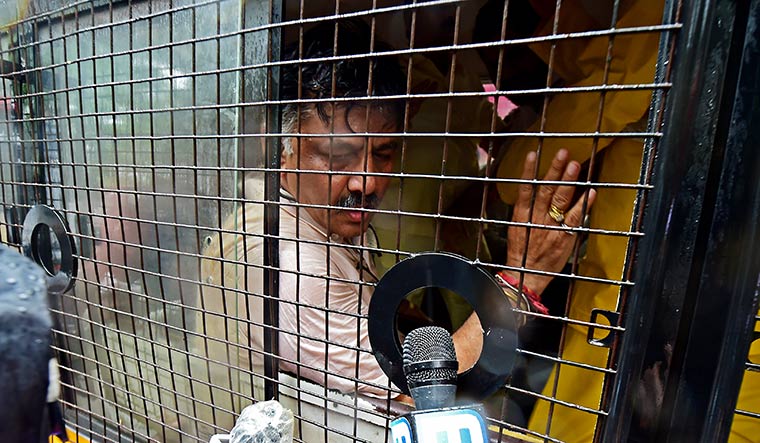 KARNATAKA IS ONCE again staring at a constitutional crisis, as the Janata Dal (Secular)-Congress coalition government is on the brink, following a spate of resignations by rebel MLAs. With two independent MLAs withdrawing support and 16 rebel MLAs—13 from the Congress and three from the JD(S)—resigning, the H.D. Kumaraswamy government has been reduced to a minority.

While the sinking coalition is blaming the opposition BJP for the political coup, the leadership crisis in the Congress, constant friction between the coalition partners and the dominance of the Deve Gowda family in governance, too, have been factors that triggered the rebellion.

The overall strength of the 224-member Karnataka Assembly has been reduced to 208 following the resignations. The BJP has 107 seats, while the ruling combine has come down to 101. The coalition leadership is desperately trying to woo back the rebels, who have moved out to a Mumbai hotel. None of the senior Congress leaders, including the party’s famous troubleshooter D.K. Shivakumar, have so far managed to mollify them, although Speaker K.R. Ramesh Kumar’s decision to “examine” each resignation individually has given a breather to the distraught coalition.

The timing of the resignations, when Kumaraswamy was away in the US and state Congress president Dinesh Gundu Rao was on a European trip, raised suspicions of a political coup orchestrated by the BJP, which has tried to poach coalition MLAs several times in the past.

The Congress has appealed to its members to come back or face action under the anti-defection law. “Our MLAs have been trapped by the BJP,” said former chief minister Siddaramaiah. “We urge them to come back. We will induct them into the cabinet, based on merit,” he said. All ministers except the chief minister have already resigned.

Senior Congress leaders including Ghulam Nabi Azad, Ahmed Patel, Anand Sharma, P. Chidambaram, Motilal Vora, Jyotiraditya Scindia and Randeep Surjewala held meetings to discuss the crisis. Former Congress president Rahul Gandhi, mother Sonia and sister Priyanka stayed away from these meetings. Subsequently, Congress general secretaries Mallikarjun Kharge and K.C. Venugopal rushed to Karnataka. It was, however, felt that the response was not particularly swift, and this was blamed on the leadership vacuum at the centre. 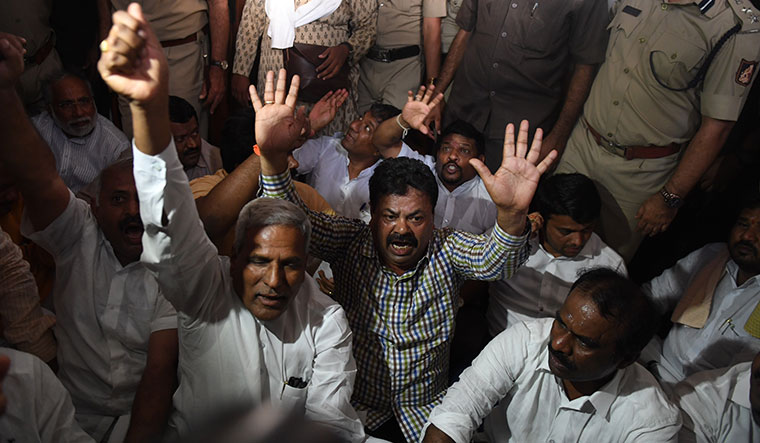 The JD(S), which has moved its MLAs to a resort in Nandi Hills near Bengaluru, has given an ultimatum to the Congress to bring its rebels back. Gundu Rao, meanwhile, has petitioned the speaker to disqualify the Congress rebels, except veteran leader Ramalinga Reddy. The rebels, however, say they have quit only as MLAs, but not from the Congress.

Legal experts as well as BJP leaders are unhappy about the speaker’s decision to examine each resignation individually, calling it a “delaying tactic”. “There is no question of rejecting the resignation letters,” said BJP MLA Basavaraj Bommai. “It is only a futile attempt by the Congress and the JD(S) to bypass the Constitution to stay in power.” Senior advocate K.V. Dhananjaya said the speaker only had to verify whether the resignations were given under duress. “The move to examine the resignations without any sense of urgency smacks of mischief,” he said.

The BJP said the crisis was caused by troubles within the Congress. “You have to keep your house in order rather than blame the BJP,” said state BJP president and former chief minister B.S. Yeddyurappa. A BJP delegation led by Yeddyurappa met Governor Vajubhai Vala on July 10, seeking his intervention to resolve the crisis.

The rebels blamed the crisis on the manner in which the coalition was being run. Some are angry about being kept out of the cabinet, while some are unhappy about the lack of coordination between the Congress and the JD(S). Many Congress leaders believe that the coalition was imposed on the state leaders by the high command, to send a signal that the Congress would be an “amicable” alliance partner ahead of the Lok Sabha polls. But after the alliance suffered a major debacle in the Lok Sabha elections, winning just two of 28 seats, many of them are not inclined to continue the arrangement as they feel it endangers their political survival. They believe that the Congress is accruing anti-incumbency, while reaping little benefit from being a part of the ruling coalition.

Resigned JD(S) leader Vishwanath said fellow Kuruba Siddaramaiah, who heads the alliance coordination committee, was responsible for the “failure”. “The coalition experiment has failed in Karnataka,” he said.

There is also speculation that Siddaramaiah is behind the coup as he is feeling suffocated in the coalition. MLAs close to Siddaramaiah blamed the interference by the JD(S), especially by PWD Minister H.D. Revanna, and the non-allocation of funds for their constituencies. Munirathna said funds were not given for development work in his constituency. “I was not consulted before finalising the detailed report for the proposed elevated corridor project. The coalition has neglected the Bengaluru MLAs.”

Siddaramaiah loyalists, meanwhile, flirted with the idea of bringing back their leader as chief minister after offering Revanna the post of deputy chief minister. The plan failed to take off because of objections from Deve Gowda, who hinted that he would prefer Kharge, if a change was indeed required.

Congress MPs have been aggressive in the Lok Sabha on the issue, putting the blame on the BJP. On July 9, Adhir Ranjan Chowdhury, leader of the Congress in the Lok Sabha, asked his MPs to raise slogans in protest after Speaker Om Birla denied him permission to speak on the issue. Rahul Gandhi was among the MPs who took part in the protest. Surjewala blamed Prime Minister Narendra Modi for the crisis, calling the mass resignations “Modi Orchestrated Defection in India”. Defence Minister Rajnath Singh denied the charge, saying the BJP did not indulge in horse-trading. “My party is committed to maintaining the dignity of parliamentary democracy. Rahul Gandhi has started the trend of resignations in the Congress,” said Singh.

It may not be easy for the BJP, however, to deny its role in the crisis as the rebels flew out of Bengaluru on chartered flights and were seen rubbing shoulders with BJP leaders in Mumbai. Independent MLA H. Nagesh, for instance, was escorted by Yeddyurappa’s personal assistant N.R. Santosh on a private jet.

In a bid to woo the rebels back, Shivakumar flew to Mumbai on July 10, but he was denied permission by the police from entering the hotel where the rebels were staying, citing a complaint by the MLAs, who said they feared for their safety. Shivakumar and former Mumbai Congress chief Milind Deora were later detained by the police for violating prohibitory orders.

The rebels moved Supreme Court on July 10, complaining that the speaker acted in a partisan matter and was deliberately not accepting their resignations. A bench headed by Chief Justice Ranjan Gogoi said it would consider taking up the issue the next day. Kumaraswamy has convened a cabinet meeting the same day, and is likely to decide whether to step down or pursue the rebels. A final resolution to the crisis, however, is likely only after the legislature session begins on July 12 and the speaker orders a floor test.