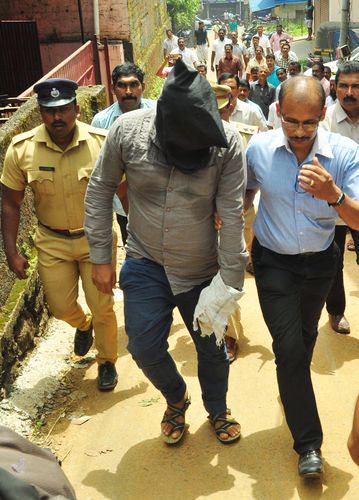 Uncovering the truth: Subahani being brought to his home in Thodupuzha for evidence collection.

SUBAHANI HAJA MOIDEEN’S blood group is AB positive and blood-donor groups in his native Thodupuzha, a buzzing town in Kerala’s Idukki district, have his number saved on their phones. His would be the first name they would call in case of emergencies.

All this was much before a team of French investigators flew down to Kerala on December 5 to interrogate Subahani in connection with the 2015 Paris terror attacks in which 130 people were killed. Subahani was arrested in 2016 by the National Investigation Agency for being a “trained Islamic State fighter’’. He is now lodged in Viyyoor central jail near Thrissur, pending trial.

For people in Thodupuzha, the 33-year-old was a maverick and a nutcase. Not many of them, however, are willing to talk about “Subahani, the terrorist”. His friends and neighbours find Subahani’s transformation from “weirdo’’ to trained terrorist confusing. “We find it tough to believe that the French investigation team came just to interrogate an abnormal guy like Subahani in connection with the Paris terrorist attacks. Perhaps, only abnormal guys kill people hoping for heaven after death,’’ said P.A. Saleemkutty, Subahani’s neighbour.

But Saleemkutty, a football player who runs a blood-donor club, has some fond memories, too. “Subahani was always ready to donate blood, whenever I called him,’’ he said. Subahani’s friend A.J. Sinaj said he could not win even a game of chess. “When he was arrested for being a mastermind who plotted terrorist attacks, we were surprised,’’ he said.

The youngest son of a Tamil family which migrated to Kerala nearly 40 years ago, Subahani was a loner. A schoolmate who did not want to be identified said Subahani was addicted to computers and was active on social media. But he rarely had any real social interaction. He also spoke about Subahani supporting the Pakistan cricket team. “I don’t think anybody ever cared for him even when he went missing. He was addicted to drugs and alcohol from a very young age,’’ he said. Subahani was an average student. And, none of his teachers remember him.

Subahani’s elder brother Muhammed, who runs a textile shop, said his brother was a regular guy. “Everything was normal. We do not know what happened,’’ he said. Some say Subahani became abnormal after the early demise of his mother. He was very close to her. “After his father remarried, father and son grew apart,” said a neighbour. As Subahani grew increasingly “weird”, the family took him to several religious preachers to “correct’’ him. “He started growing a long beard and became more religious than the ustads,’’ said Saleemkutty.

Subahani quit his undergraduate studies and moved to Chennai where he did a course in computer application. He worked in Chennai for six months and married a Tamil girl. His condition grew worse after the marriage, as he did not like the girl. Some of his friends said he had married without meeting his bride even once. His family, however, denied the allegation.

After his marriage broke down, Subahani returned to Thodupuzha where he helped his father and brother run the textile shop. But things became worse after he apparently misbehaved with his stepmother. “He was a nuisance and all were happy when he left for Saudi Arabia to perform Umrah,’’ said a neighbour.

But Subahani was gradually turning into an agent of Islamic State. According to NIA sources, he was brainwashed by online preachers like Anwar al-Awlaki. He left for Jeddah from Chennai in April 2015 and from there to Turkey where he was welcomed by an IS handler. “He got trained in Mosul and was deputed to join IS,’’ said an NIA official.

Subahani told the NIA that he had met many Indians who were IS members. It was during this time that he interacted with the terrorists who executed the Paris attacks. Subahani told NIA sleuths that he could not stand the bloodshed, and tried to escape several times. Finally, IS let him go on the condition that he would help the group spread its wings in India. He reached the Indian embassy in Turkey and said that he had lost his passport. He sought the mission’s help to return to India.

“We never believed him and he was under constant surveillance. We were convinced of his involvement when IS people were arrested from Kanakamala in Kannur district of Kerala for plotting a terror attack,’’ said the NIA official. Subahani was arrested from Sivakasi while trying to procure explosives.

“Subahani’s family is paying the price for his misdeeds,’’ said R. Krishnan, who runs a shop in Thodupuzha. The local unit of the BJP had taken out a march to the family’s textile shop. Subahani’s father is bedridden and the police once brought him to meet his father. “Nobody was really happy to see him, but the family still prepared mutton biriyani, Subahani’s favourite dish,’’ said a neighbour.

Saleemkutty said timely counselling and some more attention would have saved Subahani from becoming a terrorist. “He had saved many lives,’’ said Saleemkutty. “But when one decides it is all right to kill innocent people to get to heaven after death, he no longer deserves any sympathy.’’