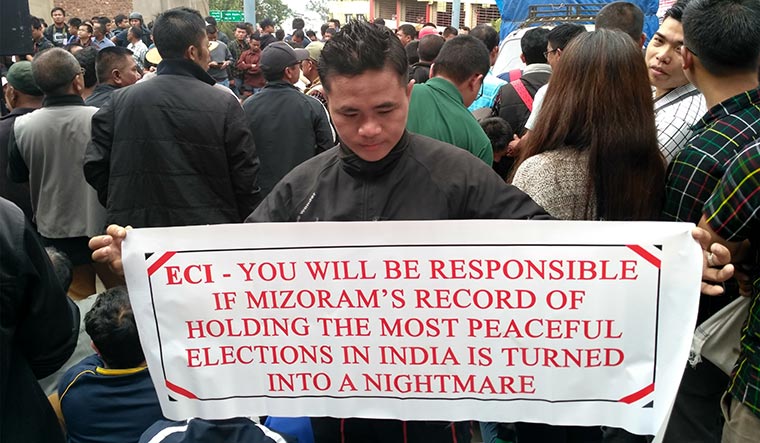 Mounting pressure: A protest outside the Election Commission office in Aizawl | Adam Saprinsanga

Mizoram is the only northeastern state that the Congress rules. It is also the final frontier for the BJP, which is ruling, alone or in coalition, all the other states in the region. The BJP did not have a party office in the Christian-dominated Mizoram five years ago, but will now contest almost all 40 seats in the assembly elections on November 28.

However, all is not well for the BJP. The people of Mizoram are furious at the Narendra Modi government’s efforts to bring back the Bru tribals to the state. Brus are considered non-Mizos and are also known as Reangs. Thousands of them had left the state in the 1970s after alleged persecution by the Mizos. The neighbouring state of Tripura built relief camps for them in Kanchanpur, 20km from the border. A much larger exodus to Tripura followed ethnic riots in 1997. Now 46,000 Brus live in Tripura.

The A.B. Vajpayee government tried to bring the Brus back to Mizoram, but could not do it. In 2014, Modi and Home Minister Rajnath Singh took several steps to repatriate the Brus.

The community, however, does not want to return to Mizoram until it gets its own autonomous district council, like the persecuted Chakmas did in the 1970s. The Brus also want free ration and security cover till they are resettled in the Mizoram districts of Mamit, Lunglei and Kolasib.

Mizoram Chief Minister Lal Thanhawla, a Congress veteran, agreed to accept the Brus but turned down the demand for an autonomous council. The church and the Young Mizo Association, both highly influential in the state, had pressed Lal Thanhawla to reject the demand. The 1986 Mizo Accord signed by prime minister Rajiv Gandhi and Mizo leader Laldenga, which had given Mizoram almost Kashmir-like autonomy, had also given a lot of powers to the church and civil society organisations. Even cognisance of many criminal offences requires the approval of the church and organisations such as the YMA. The accord also prohibited the creation of any autonomous district council in Mizoram after 1987.

“The Chakmas got their autonomous district council, but that was in 1972,” said Pu Chhuantea, YMA general secretary in Mizoram. “Now [there is no] such scope. If it is done, then the Centre would [have] betrayed the cause of the Mizos.” 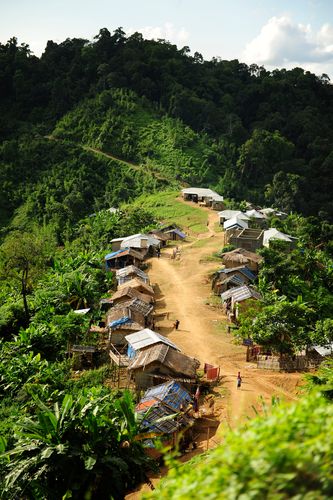 Before the 2014 Lok Sabha elections, the Election Commission began enrolling the Brus, but only 6,000 decided to return to Mizoram. They settled in the Mamit district. To get more of the Brus to vote, the Election Commission gave them the option of postal ballot. Allegedly, it also sent some electronic voting machines to Kanchanpur. About 12,000 Brus voted in the elections.

As the Election Commission decided to send EVMs to Kanchanpur for the Brus to vote in the upcoming assembly elections, the civil society organisations—under the banner of the NGO Coordination Committee—protested outside the office of Chief Electoral Officer S.B. Shashank. Earlier, the Election Commission had transferred a senior home department official, allegedly because he was resisting the move to send EVMs to Kanchanpur. The Coordination Committee demanded that Shashank be fired.

“He has done a foolish job and he would have to face the consequences,” Zoramthanga, former chief minister and Mizo National Front president, told THE WEEK. “He should be sacked. He cannot take a unilateral decision.”

Shashank had also requested heavy deployment of Central armed police forces in the state so there could be free and fair elections. “We are a peaceful state after so many bloody years,” said social activist Remrualta Varte. “Never before [has] such a huge number of forces been deployed in our state. Mizoram has never seen booth rigging or election malpractice, thanks to the church’s intervention.”

Chhuantea said the YMA would not allow elections in Mizoram unless Shashank was removed. “The chief electoral officer has been called to Delhi and we know from a confidential source that he would not be sent back,” he said. 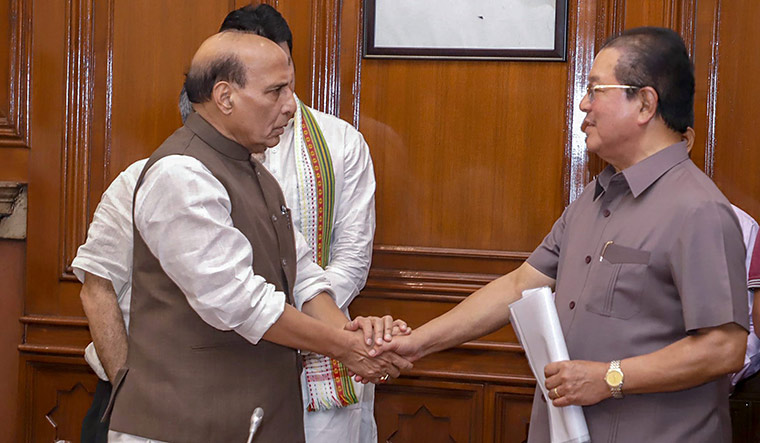 Notably, the church and the YMA are ready to accept the returning Brus, but not the ones who, they say, have illegally come from Bangladesh. Varte said if Mizoram had a revision of the National Register of Citizens, like Assam, the Central government would understand the level of influx.

Said Zoramthanga: “I would like only original Brus and Chakmas to live in Mizoram. My government would ensure that.”

Varte said the report was disseminating wrong information. “The Bru Students Union (BSU) and Bru National Union (BNU) were formed in the 1990s to press for an autonomous council,” he said. “The Mizo people refused to accept it.” The Bru leaders, he said, exhorted their people to leave Mizoram unless they got the council by March 22, 1998. An armed wing, the Bru National Liberation Front, was founded. “Despite the Mizos’ repeated requests, the BRU leaders have refused to let the people come back,” he said. 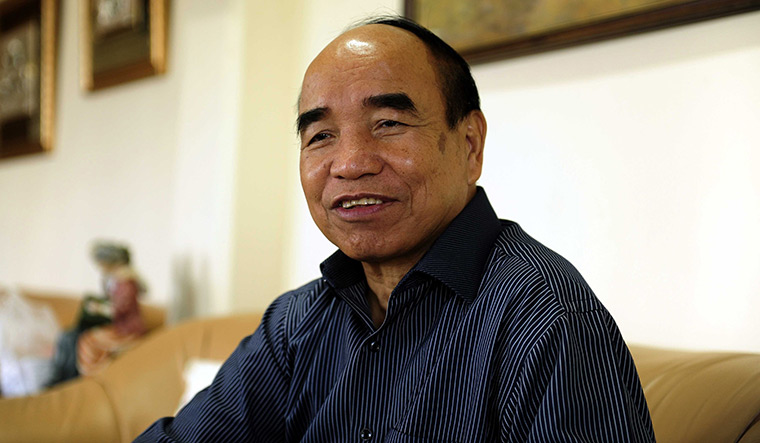 As it stands now, the Bru controversy has overshadowed every other issue in the state, and it is the parties versus the Election Commission. Even the BJP has said that the commission went too far by enforcing the strict rule. “We want the chief electoral officer to be removed, and the home department official to be reinstated,” state BJP president J.V. Hluna told THE WEEK. “I have spoken to [party president] Amit Shah and [North-East Democratic Alliance convener] Himanta Biswa Sarma about it.”

He said the BJP was eyeing a good haul in the elections, especially as a couple of Congress leaders had recently jumped ship, one of them a former speaker of the assembly, Pu Hiphei. “The Congress did not give me any respect,” Hiphei told THE WEEK. “And under Narendra Modi, India has become an economic superpower. So, I have decided to strengthen the BJP in Mizoram.”

The BJP is also likely to have the support of the lakh-strong Chakmas, which could translate to at least seven seats. The party has several Christian candidates this time. “I have full faith in the church,” said Hiphei. “They would support me because Christians are safe under Modi’s rule.”

Chhuantea, however, said the YMA and the church would not take sides during the elections. “We are not fans of the BJP,” he said. “What happens in mainland India in the name of gauraksha (cow protection) is not a good sign. But that does not mean we will take an anti-BJP stance.” 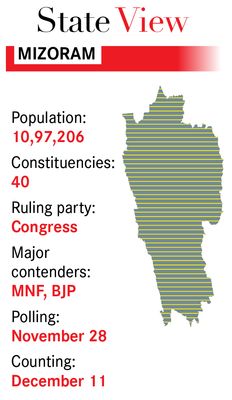 The real fight, however, would be between the Congress and the MNF. Though the Congress bagged 34 of 40 seats in the previous elections, this time, at least a handful of senior Congress leaders have joined the MNF. Moreover, to appease the church, Zoramthanga has promised to enforce total prohibition of liquor and drugs, which the religious bodies had been campaigning for. “This Congress government is the most corrupt government in the northeast,” he said. “Under the current chief minister’s tenure, liquor has affected every sphere of life. The youth are jobless and drug smuggling is rampant.”

In October this year, Zoramthanga also said that his party would contest the elections on its own. The MNF is a member of the BJP-led North-East Democratic Alliance since 2016. This he hoped would endear him to the church. “I am confident of winning on my own,” he said. “I will not require the BJP’s support.”

As the church has prohibited open rallies, the state usually sees whisper campaigns and closed-door meetings by parties and civil society organisations. “So, it is always important to get support of the civil societies and church authorities, and we have done that,” said a senior MNF leader.

Hiphei, however, said that the BJP-MNF divorce was temporary. “This is because no party will get a full majority and Mizoram would get a coalition government with the help of the BJP,” he said. “That is the only possibility.”

He said that Modi might not even visit Mizoram for election campaign. “There would be no high-decibel campaign,” he said. “So, what is the point of him coming?”

Another source, however, said Modi could reach the state after November 20. The BJP would hope he does.