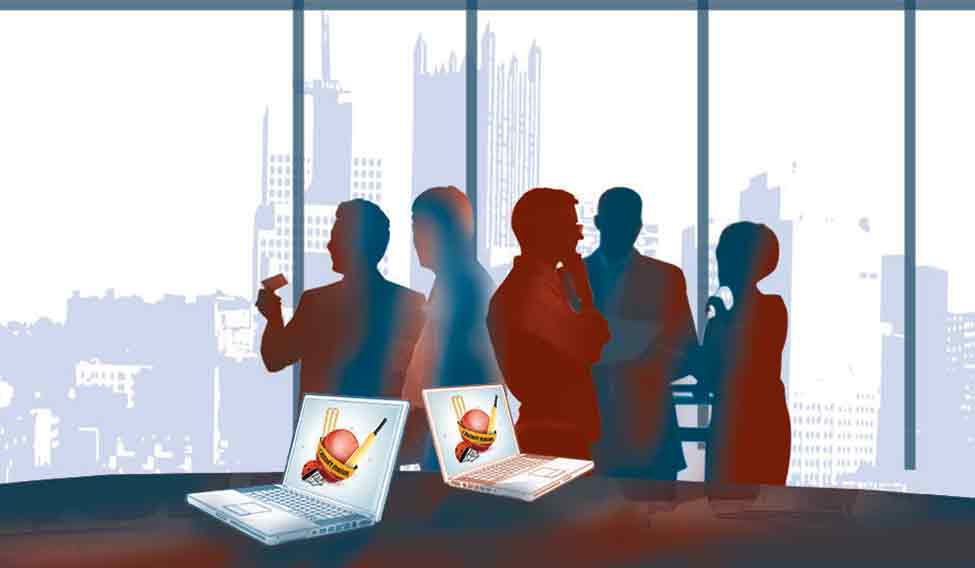 We bet on anything, from weather to politics. So, the advent of the Indian Premier League has been a windfall for us. It keeps us busy and in business,” said a seasoned bookie from a local satta bazaar (betting market). “We know which matches are coloured (meaning fixed) and accordingly adjust the odds and stakes,” he said.

Betting, however, has its downside, too. On May 12, Ram Dayal Verma, 39, hanged himself from a tree in Delhi; he had lost crores betting on IPL matches. And, on April 25, Delhi Police arrested 22-year-old Rachit Gupta, a restaurant owner at Rajouri Garden, and a class 12 student, for betting on IPL matches. The duo had bet about Rs 5 lakh on the match between Delhi Daredevils and Mumbai Indians on April 23. The same night, in Kozhikode, Kerala, the police arrested four businessmen for allegedly engaging in online betting during the match between Sunrisers Hyderabad and Kings XI Punjab.

With the burgeoning betting atmosphere, youngsters, including schoolchildren, have started placing bets in local betting markets, leading to a spurt in juvenile crime. To curb this menace, many have called for legalising betting in sports in India.

Recently, three Supreme Court-appointed committees supported legalisation of betting in cricket. The IPL spot-fixing scandal of 2013 led to a Supreme Court-monitored investigation by a three-member committee led by Justice Mukul Mudgal. In its report, the committee recommended that “legalising sports betting would reduce the element of black money and influence of the underworld”. Another committee led by former chief justice of India R.M. Lodha, which submitted its report in January, said: “With only [betting on] horse racing legally permissible in India, those interested in betting have gone underground, with illegal bookies managing affairs. As is inevitable, the hawala system has awakened to these channels and money laundering has also become an inevitable outcome.” The committee suggested that the government enact laws to license betting, but without allowing players, teams and administrators to participate in it.

In its third report submitted to the Supreme Court last year, the special investigation team on black money, appointed by the apex court and led by Justice Arijit Pasayat, said: “Illegal activity of cricket betting requires to be controlled by some provisions which are a deterrent to all concerned.”

India's online gaming industry, too, seems to be awaiting a favourable decision. Legalising betting in cricket is expected to bring them massive revenue. Currently, no Indian website (expect in Sikkim and Goa) allows betting, be it on online games such as poker or chess, or on sports such as cricket or hockey. But, if betting is legalised, they could do so. This would also provide alternatives to foreign bookmakers such as Ladbrokes and William Hill, whose websites many Indians currently access. Said George Obourne, CEO of Indiabet.com: “Legalising betting will bring in accessibility, tax returns, responsible gaming and, most importantly, it will regulate the gaming market. The Indian betting market is entirely unaccountable.” As of now, his website hosts quizzes, and allows visitors to speculate on matches, albeit with no money on the line.

Size of the industry
According to the Federation of Indian Chambers of Commerce and Industry, the estimated worth of the illegal betting market is about Rs 3 lakh crore. And, If it is made legal, the government would earn Rs 12,000 crore to Rs 19,000 crore a year.

But legalising betting is a ticklish issue for any government as gambling is a state subject. Also, the lack of political will and moral dilemma have been impediments. “Somehow, this is a moral call no government is willing to take,” said Mudgal. “There is a staggering amount of revenue the government can generate by taxes. Why not take the bold measure? The law is very diffused. How is horse racing different from other sports? You can bet on the skill of a horse or jockey but not on skills of a batsman or a hockey player?”

Said Kapil Khanna, president of the All India Association of Lottery Trade and Allied Industries: “Mainly, it is the moral dilemma which leads to lack of political will. We are aware that the illegal betting market has expanded a lot. Its unchecked growth has caused many problems, like match fixing. There is a problem because of the lack of an observatory mode.”

Vidushpat Singhania, partner at Krida Legal, which advises on sports litigation and does policy work for the government, said: “The Supreme Court is yet to adjudicate on whether wagering or putting money on sports like cricket is legal. The Andhra Pradesh High Court's judgment on its Gaming Act has held that, as a game of skill falls outside the Act and the nature of the game is not altered, such wagering is outside its ambit.” He added that, in the absence of any law on it, “the Supreme Court can plug gaps in legislation if required, like it has done in the Vishakha case (where the court laid down requirements for employers dealing with complaints of sexual assault). If not within the law, it can lay guidelines in the interim covering the ambit of betting in sports.”

Potential safeguards
If betting is legalised, the Lodha report has outlined the following safeguards. Regulatory watchdogs would be required to monitor betting houses and to cancel the licences of those who violate rules. Players, administrators and others associated with the sport would be required to furnish details of their income for the sake of transparency. Licences would have to be issued to those placing the bets, with age and identification details recorded.

Meanwhile, as the issue is being debated, Goa and Sikkim have legalised online betting on cricket and games such as poker, chess and rummy. However, the law is strict and is applicable on activities only within the states. According to the state finance department, Sikkim has earned 07.21 crore from betting in 2015-16.

Will it curb sports fraud?
Betting is said to be a major source of hawala money, and match-fixing scandals have often been linked to the underworld. So, will legalising betting curb these malpractices? “Yes, it will,” said Mudgal. “The gaming commission (the proposed regulator) would have people of integrity on the lines of the US or UK gambling commissions.”

Investigators, however, say frauds will still happen. “Malpractices still happen in the UK where everything is online,” said a top investigator who probed the IPL spot-fixing controversy. “Match fixing will remain, only betting will be legal. However, the role of the underworld will be reduced.”

Sources in the online gaming industry say the biggest advantage of legalising betting is that it can control addiction. Betting operators will not accept bets beyond a point, as they will have access to data regarding the bettor's credit status. If a visitor shows signs of addiction, access will be denied after a point. They will also restrict entry of under-age clients.

Also, said Singhania: “Goon service will go down as operators follow responsible gaming practices all over the world.”

Said Obourne: “Globally, the trend is of regulating betting. It is the direction in which sports betting is moving. It is a way to stamp out dangerous elements in sports.”

CYBER CHANCES
* On May 12, former Indian captain Kapil Dev inaugurated the country's first online sports betting centre in Gangtok.
* There is no specific law in India that bans an individual customer from placing an online bet with a bookmaker based outside India.
* A large number of online bookmakers take bets from those living in India but the main problem is sending money to bookmakers and getting it back when you win.
* Ladbrokes, William Hill, bet365 and betfair are popular foreign bookmakers.