A song of ice and fire

Their batting prowess aside, Kane Williamson and Virat Kohli have little in common 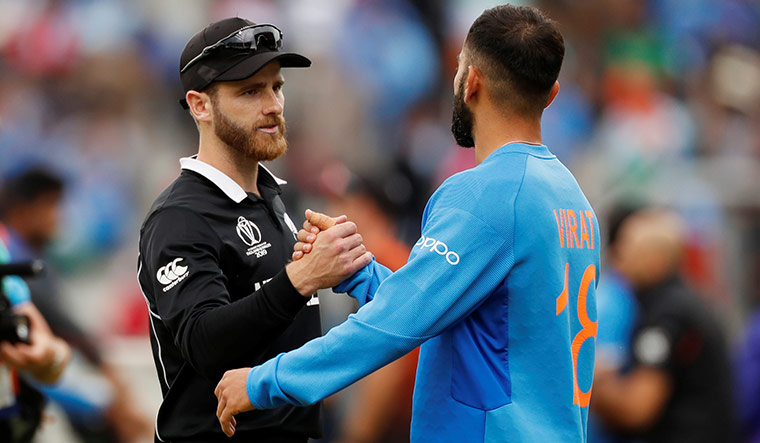 Mutual respect: Kohli and Williamson after the semi-final in Manchester | Reuters

They are two of the best in this generation, but that is where the similarities end. Kane Williamson, the New Zealand captain, is calm like his hometown of Tauranga. He speaks and bats softly, and looks like the boy next door. Virat Kohli, on the other hand, has a styled look, is aggressive on the field and has every bit of that ‘never-back-down attitude’ of a Delhiite.

As India faced New Zealand in the rainy semi-final in Manchester, the contrast between the captains was clear as day. Kohli had led India into the semi-finals as the top ranked team. They had won seven, lost one, and had one washed-out game. Williamson, meanwhile, led a team that huffed and puffed its way into the semi-finals. They won five, lost three, and had one abandoned game. Barring the odd display from Jimmy Neesham and Ross Taylor, the onus of batting was on Williamson’s shoulders throughout the tournament. Including the semi-final, he has scored 548 runs in the tournament, including two hundreds and two fifties. Williamson has had to stand like a rock to alter his team’s fortunes. And he did so again to take his team to its second consecutive World Cup final.

As skippers, Kohli and Williamson are chalk and cheese. The semi-final showed that. Before the match, Williamson shrugged off the underdogs tag. After it, he chose equanimity. “It was a brilliant fighting effort from our guys,” he said in the post-match press conference. “The sort of mentality required to stay in the game for long. There is so much more to winning and losing. You identify parts of matches not directly in your control. You need to move away to give you clarity. It is important not to be scarred by those games [we lost].”

Kohli’s face, as usual, gave away his feelings. “To go out after 45 minutes of bad cricket is saddening, heartbreaking,” he said after the match. “You are number one in the points table. This is part and parcel of the game. One is gutted but have to accept it and move on. It has happened to us before.”

India had previously failed to make the final of the 2015 World Cup and the T20 World Cup in 2016. In 2017, Kohli’s men made it to the Champions Trophy final, but lost to Pakistan.

The two captains, along with Joe Root of England and Steve Smith of Australia, form the golden quartet of batsmen of this generation. Little separates them in terms of Test averages, but in ODIs, Kohli has raced ahead. Compared with his 41 centuries, Williamson, Root and Smith have 13, 16 and eight respectively.

But it was in Kohli’s format that Williamson outshone him at Old Trafford. “I think he is one of the finest players right now; outstanding,” former Indian captain Kapil Dev told THE WEEK. “What stands out is his calmness. He put himself in that position of winning the toss and batting first in these overcast conditions, knowing that the whole team plays around him. You must give him credit for that.”

Former New Zealand coach Mike Hesson said on the Star Sports show Game Plan: “Kane Williamson is a very consistent character, his personality is about just doing the same thing over and over again. So I guess when you are so particular on how you prepare and play, you can get consistency in performance. The big difference is he soaked up pressure in this World Cup, and because of that he can now get 60s and 70s, and knows how to get the big scores.”

Kapil Dev, one of the best bowlers of his time, said he marvelled at how Williamson could handle the likes of Jasprit Bumrah and Bhuvneshwar Kumar while his openers struggled to get bat on ball. “He stands on the off stump, but never gets out LBW,” he said. “You will never see him missing the ball and it does not matter how quick anybody is bowling. He changes the bowlers’ length by standing on off stump and walking to the middle stump. That is his strength.”

Kohli had a different role in this World Cup, especially as Rohit Sharma carried the innings many a time. He did have a crucial role to play in the semi-final, but got trapped LBW to Trent Boult on 1. It was a rare failure, and one that did not do justice to his batting in the tournament.

Said former Indian opener Krishnamachari Srikkanth: “[Kohli] can play every role for his team, across every format. He can drop anchor and let his partner shine if that is what the team needs. He can also shift gears if the situation demands it and keep pushing up the run rate. This is his true mastery. He can manoeuvre and control a game and pace himself beautifully.”

Kohli and Williamson first met at the Under-19 World Cup in Kuala Lumpur, 11 years ago. In that semi-final, the Indians led by a chubby-cheeked Kohli beat the young Kiwis led by a scrawny, smiling Williamson. Kohli even picked up Williamson’s wicket, and India went on to win the World Cup. The duo then led parallel journeys as they graduated into senior cricket.

At the press conference before the semi-final though, the duo could barely recollect that face-off. The impending game weighed on their minds, but they did laugh at the memory.

The ace batsmen have nothing but high praise and respect for each other’s game. “In 2007, we went to New Zealand and we were playing an Under-19 Test match,” Kohli had said at the pre-game press conference. “He played a shot off one of our fast bowlers, who was quick, off the back-foot. I remember standing in the slips and telling another guy, ‘I have never seen anyone play a shot like that’, and that he was special.”

Williamson had reciprocated, saying, “He was a formidable player, growing up. That seems odd to say because we were the same age playing against each other on a number of occasions and then to go into international cricket at a youngish age, then IPL and these different sorts of things. So, it has obviously been a pleasure watching Virat play and evolve into the superstar that he is.”

Their individual form aside, both captains have led teams that had wildly contrasting fortunes with the bat. For Kohli, the top order had been key to the team’s success, with the top three scoring 69 per cent of the total runs, till the semi-final. However, it was in Manchester, in the game that mattered the most, that the top order failed. Sharma, K.L. Rahul and Kohli together got three runs.

Williamson has had the opposite problem. His top order has consistently failed, especially with the experienced Martin Guptill in poor form.

Given the chinks in the batting armours, both captains have had to rely on their bowlers to win them matches. While Kohli had the support of Bumrah, Mohammed Shami and Bhuvneshwar Kumar, Williamson has had to rely on Trent Boult and Lockie Ferguson.

“Boult knows the Indian batsmen extremely well,” said former New Zealand captain Daniel Vettori. “They have to stay aggressive and let Trent work his magic at the start. In the middle [and late overs], his reverse swing, yorkers and now the knuckle ball mark him out as one of the world’s premier white-ball bowlers.”

As Vettori had predicted, Boult and his new-ball partner Matt Henry blew away India’s top order, and with it their hopes of making another World Cup final. Boult would have to deliver again in the final on July 14. But, guided by that iceman with a gentle smile, both Boult and New Zealand can together dream of lifting their first-ever World Cup. And, as the saying in the cricketing world goes, it could not happen to nicer guys. 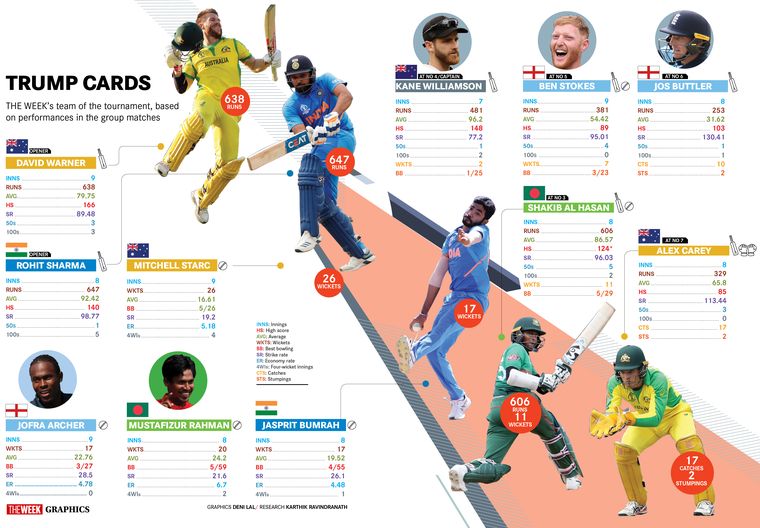