India's trajectory in hockey is similar to that of Belgium's, but only up to a point 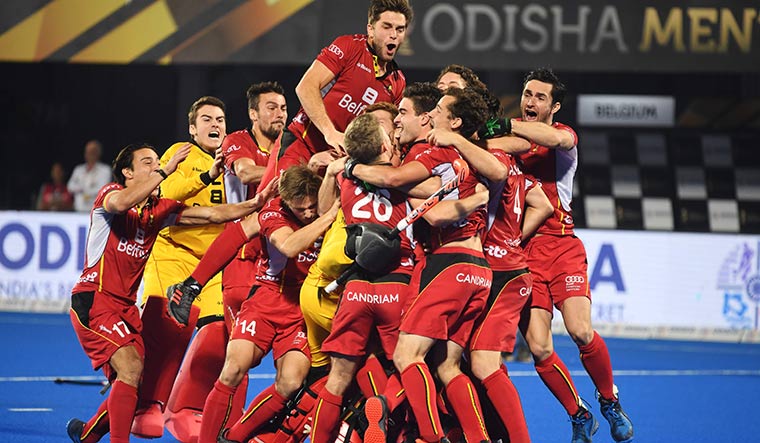 Red lions roaring: Belgium celebrates the win against the Netherlands in the final | AFP

For three weeks, Bhubaneswar was the centre of the hockey world. The sparkling Kalinga Stadium—venue of the 2018 Odisha Men’s Hockey World Cup—saw fans turning up in good numbers for non-India matches, too. But, perhaps, the biggest takeaway from the event was the lesson the Odisha government gave the rest of India on how to host an international sporting spectacle. Security was unobtrusive, but, omnipresent. Gone were the innumerable check points, which made entry cumbersome. No questions were asked about why you are carrying a pen or a 05 coin. Most importantly, police personnel were welcoming. They were trained—by a firm which trains inflight attendants—to deal with spectators politely, yet, firmly.

“Whatever happened is basically the vision of our honourable Chief Minister Naveen Patnaikji,” said Vishal Kumar Dev, sports secretary, Odisha. “We were executing whatever his desire was. He wanted the tournament to be truly world class. From our side we did whatever we could. It was successful—that is the feedback we got from the FIH [International Hockey Federation], spectators and teams.” Dev told THE WEEK that the efficient security arrangements were a learning from the 2017 IAAF World Championships in London. “We had sent a team there,” he said. “We were very clear that everybody should go back with pleasant memories. We had said police has to be minimal, but policing effective.”

The tournament came to a close on December 16, when Belgium beat three-time champions the Netherlands in sudden death to lift its maiden World Cup. The overcast Bhubaneswar sky, threatened by Cyclone Phethai, was lit up by fireworks. On the ground, the Red Lions broke into song and dance. Their head coach, New Zealander Shane McLeod, looked and sounded far more experienced than his 48 years, thanks to his white hair, soft voice and lean look. Very unlike his opposite number, Max Caldas—Argentine by birth, Dutch by passport, burly, with a booming voice and a dry sense of humour. While his team celebrated, McLeod spoke about the journey from being No 13 in the world in 2008 to No 1 in 2018. He spoke of heartbreaks, of losing finals, yet keeping hope alive. And, believing in destiny. “It is in the stars,” said McLeod. “We spoke pre-game about the stars aligning, about destiny being in the air.”

However, Belgium’s journey to the top of world hockey has been about much more than destiny. In 2008, it qualified for the Beijing Olympics and finished ninth. Eight years later, in Rio, it struck silver. Now, gold is the target for Tokyo 2020. The core of the team is the same—captain Thomas Briels, Vincent Vanasch and Florent van Aubel—with Alexander Hendrickx, who was top scorer at the World Cup. “We worked really hard,” said Briels. “We cannot believe we are world champions. We are just grateful we can give back to the coaching staff in the past who have built this team.”

The trajectory of Indian hockey is similar to that of Belgium, up to a point. India was ranked 12th in 2008. Ten years later, before the World Cup began, India had improved to fifth, while Belgium had overtaken it to become third. At the end of the tournament, India remained at No 5, while Belgium reached the top. “Belgium has a very long tradition of hockey,” said Leandro Negre, former president of the FIH. “In 1961, it was one of the top teams, but after that it went down for different reasons. [But] because it is close to the Netherlands, England and France, full facilities are available. The Belgian national federation and their national Olympic committee prepared a good league with the best possible coaches. All of them worked together. They have produced results in the last eight years.”

In comparison, stability has been a big issue for the Indian hockey team. From 2012 to 2018, it tried four coaches—Terry Walsh (Australia), Paul van Ass, Roelant Oltmans and Sjoerd Marijne (all from the Netherlands). It is presently flirting with the idea of changing its current coach Harendra Singh. The team won gold at the 2014 Asian Games, and finished second in the Champions Trophy’s final edition in 2018 (it will be replaced by the Hockey Pro League in 2019). It also created a pool of talented young players and won the 2016 Junior Hockey World Cup. But, results have not been consistent enough—it finished third in the 2018 Asian Games and fifth in Bhubaneswar.

“India always has a problem,” said Negre. “Hockey in India is so important, with its past. You guys want immediate results. Belgium is working together with the same team and personnel, though later on some changes were made, but always within the system. India did not do the same. They had different coaches, with different ideas and systems. But the team has learnt a lot.”

Coach Harendra Singh’s efforts are being appreciated by rival coaches and experts. Richard Charlesworth, Australian super coach and former technical adviser of Indian hockey, said: “The team has played really well in the World Cup. It needs tightening in some departments. Ten years ago you guys were tenth, eleventh. Now, India is easily in the top five teams in the world. This team can win competitions, but you do not win them without good goalkeepers. Your goalkeeper did not play well.”

Team India’s attacking brand of hockey helped it to top its group, ahead of Belgium, though India was not fancied to win the title. Its run ended with a 1-2 loss to the Netherlands in the quarterfinals. The promising forward line was error prone against the Dutch. Singh was praised for picking a young and talented bunch to play in the World Cup. Legendary forward and Pakistan team manager Hassan Sardar termed it a brave call. The team’s fitness is right up there with the best and it matched the Dutch in pace and stamina.

However, Singh’s future is a big question mark. His own evolution as a fine coach at the highest level has been remarkable. The class of boys he coached to victory at the Junior World Cup has graduated to the senior level. With only a year to Olympic qualification, it remains to be seen which way the big bosses of Hockey India will veer.