Polo ponies are revered in Manipur, but are now on the brink of extinction

Friend and god: An English player on a Manipuri pony.

A Manipuri boy with his pony.

Care Required: A woman player with her pony at a special practice session at Imphal polo ground.

Polo was the favourite sport of British Army officers in India. Though the British popularised the sport in the west, it has its roots in sagol kangjei, traditional Manipuri pony hockey. The world’s first polo club, the Silchar Kangjei Club, was set up in 1859, making Manipur the birthplace of modern polo.

Played by barefoot riders mounted on indigenous ponies without modern leather saddles or reins, sagol kangjei is more than just a sport for Manipuris. The rules of the sport are much relaxed than in international polo. There are only boundary walls; no goal posts. Legend has it that the enthusiasm for the sport was so high that polo players used to pawn even wives to buy ponies.

“There is a spiritual connection between the Manipuris and their ponies,” said Ibungochoubi Ningthoukhongjam, president of Manipuri Pony Society (MPS). The polo ponies are revered like gods in Manipuri culture. At the Marjing temple of Imphal, the main deity—Iboudhou Marjing—is the god of horses, who sits astride a winged pony. These ponies were traditionally used only for sports, rituals and wars; not as workhorses. They are smaller than the other indigenous horse breeds of India, and they are admired for their speed and stamina.

But, their numbers are fast decreasing. By some accounts, they are even on the brink of extinction. “Traditionally, ponies were never kept in stables,” said professor Priyoranjan Singh of Manipur Horse Riding and Polo Association (MHRPA). “Now, there is a lack of permanent grazing grounds for ponies.” Grazing grounds shrank with rapid urbanisation and the lack of a sustained conservation policy. And, it is now common to see ponies wandering on the roads, eating garbage and plastic; many become victims to road accidents. As many as 38 ponies, a large number considering the fast decreasing population, have died over the last two years because of accidents and diseases. 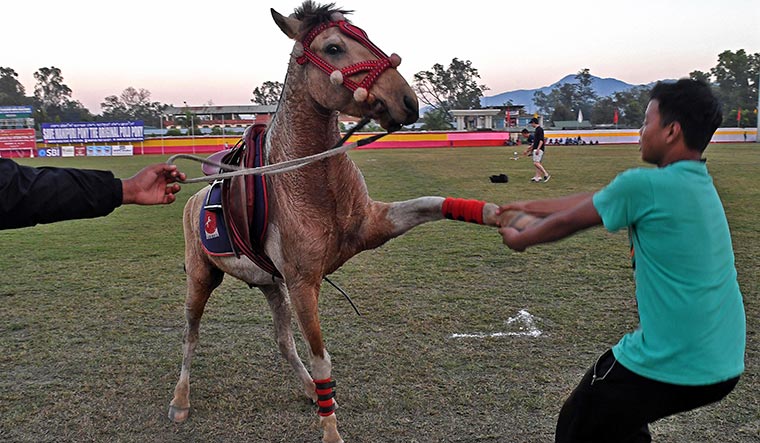 Stretching session for a pony.

Though Manipur holds two international polo tournaments every year, there are not many incentives for local polo players now. And, ponies become a prized possessions only during tournaments. The number of pony clubs in Manipur has declined from 60 around a decade ago, to just 15 now. According to the Quinquennial Livestock Census of India in 2012, there were only 1,011 Manipuri polo ponies left. The census for 2017 has not been conducted yet.

However, organisations like MHRPA and MPS are working towards conserving the animal, and thereby the sport. “Our objective is to save the Manipuri pony from extinction and increase its population,” said Ningthoukhongjam. “We [MPS] have a breeding centre, which has more than 100 ponies.” Set up in 1977, MHRPA has been conducting state-level polo matches since then. The first international polo tournament in Manipur was conducted in 1991. In the last edition of the tournament, teams from five countries participated. In 2016, in a first, the All Manipur Polo Association organised an international women’s polo tournament, too. 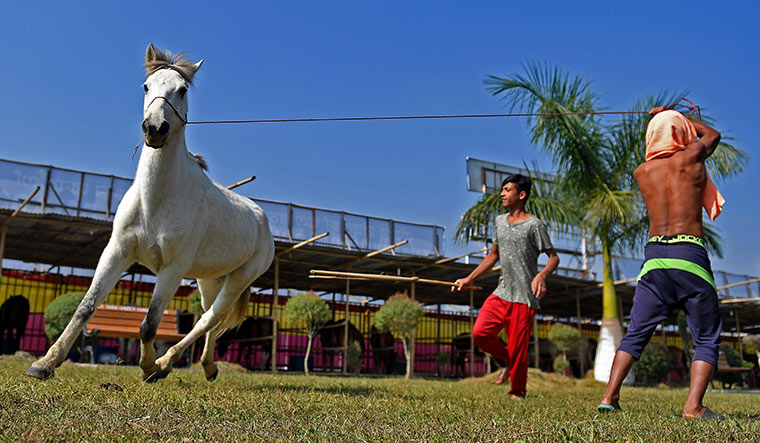 A warm-up session for a pony before a polo match.

For the annual Sangai festival—the annual cultural festival organised by Manipur tourism department—held from November 21 to 30, sagol kangjei is an important part. “I am used to taller horses,” said Kugo, an Argentinian, who took part in the 2017 festival. “But, these ponies have their unique charm. I am proud to play with the original polo pony.”

The state government came up with the Manipuri Pony Conservation and Development Policy in 2016. Last year, Manipur Chief Minister N. Biren Singh sought 039 crore from the Centre for pony conservation. But, the Centre has not responded yet. Earlier, a pony farm at Tingkai Khunou, in Senapati district, had proved to be a non-starter because of the lack of basic amenities. Plans are afoot to set up a sanctuary in Heingang, Imphal. The state government has already acquired 23 acres for the sanctuary. But, funds have to come from the Centre to make it operational, and to save the dying gods.