Javelin thrower Neeraj Chopra is defying all records, but his journey has just begun 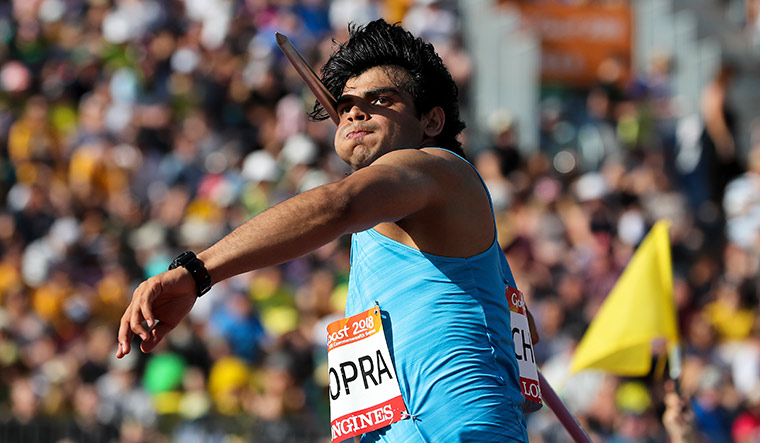 Campaign spearhead: Neeraj Chopra is expected to win a medal at the Asian Games in Jakarta | AP

A BABY FACE DOTTED with freckles, chubby cheeks, and hair that almost covers his eyes. Neeraj Chopra, 20, does look his age. But, his talent goes beyond. The javelin thrower is one of the brightest talents to emerge from India in recent times. So much so, that the world is sitting up and taking notice.

On July 29, he won gold at the Savo Games in Finland with a throw of 85.69m, almost toppling over. More importantly, he beat his Chinese Taipei rival Cheng Chao-Tsun, who has previously thrown the javelin beyond 90m. The Indian team is currently preparing for the upcoming Asian Games at a training camp in Finland.

Adille Sumariwalla, president of the Athletics Federation of India, puts it succinctly: “Chopra is one of the few world-class athletes India has currently.”

But, when he is not “zoned in”, trying to pierce the sky with his spear, you can find him online, engaged in a budding bromance with high-jumper Tejaswin Shankar, another promising prospect.

The ultimate compliment comes from Uwe Hohn, India’s national javelin coach. “He is special, yes,” Hohn, 55, told THE WEEK. He had heard of Chopra and seen his exploits on YouTube before taking charge. “But, there are technical problems with his throw, and we are working to fix these problems.” Hohn would know, being the only man to throw the javelin beyond the 100m mark, in 1984. However, because he was a citizen of East Germany, he couldn’t clinch the ultimate gold; his government had boycotted the Los Angeles Olympics. He still dreams of that gold, but now through his ward.

“I have to work much, much harder to come up with better performances,” Chopra told THE WEEK. “A lot more hard work is needed. This has been quite a learning curve for me, the past two years.”

The International Association of Athletics Federation’s Diamond League and the Olympic Channel regularly tweet about him before and after competitions. Not often do track and field athletes from India get such attention. Even world champion Johannes Vetter believes Chopra can wow on the world stage. “He is really young,” the German athlete told Olympic Channel recently.

Julius Yego of Kenya, who won silver at the 2016 Rio Olympics, was effusive in his praise for Chopra. “He is a great talent, has a great, bright future,” Yego said. “He has the qualities of becoming an elite thrower. He already holds the world junior and Asian record. He is way ahead of me.” The two recently trained at Offenberg, Germany, during the off season.

One of Chopra’s latest milestones was at the IAAF Diamond League event in Doha, in May, where he broke his own national record and finished fourth with a throw of 87.43m. This throw would have got him a bronze at the Rio Olympics. Before the Doha event, Chopra had bagged gold at the Commonwealth Games in Australia, in April. He was the first Indian to do so.

When he was a boy, in Panipat, Haryana, his farmer father sent him to a local gym to shed a few pounds. The love for exercise gradually led him to a local Sports Authority of India training centre. Javelin throwing came naturally to him, and he fell in love with the sport. The rest, as they say, is history.

For someone so young, Chopra is intense and focused even when interacting with others. “The graduation has been good,” he said. “I have gathered a lot of experience from participating in senior competitions. Last year, I participated in too many competitions and was unable to perform up to the mark in my first World Championships. That is why the aim is to get stronger and be as injury free as possible.” He had failed to qualify for the finals at the 2017 IAAF World Championships, missing the qualification mark by 74cm. Also, he did not have a coach.

Hohn, a taskmaster, has a different take. “I think there were lot of technical issues and he probably took it a bit too easy in qualification,” he said.

However, 2018 kicked off on a positive note. And, the results are showing. The sports ministry funds Chopra’s training, exposure and competition programme via the Target Olympics Podium Scheme. JSW Sports also supports him, under its Sports Excellence Programme, providing him with a personal physiotherapist and organising several training stints.

India and the world now wait with bated breath to see how soon the naib subedar will breach the 90m mark. Though he said that was his goal, he added, “My focus is on improving my technique, strengthening my body, remaining injury free and not making the [same] mistakes. I tend to fall over while completing my throw, which should not be the case.”

Only 18 athletes have ever breached the 90m barrier, of whom six are currently in action. But, none of them breached 80m in their teens. Chopra, at 18, smashed the world junior record at the Under 20 Championships in Poland with a throw of 86.48m. Chopra could well be the youngest to achieve the 90m throw, also known as the javelin gold standard.

Said Hohn: “The way he throws is not a problem, we only have to get it in the right direction. We are not focusing on 90m as of now. Our focus is on better technique. Maybe that will happen soon, considering he has come so far at this young age. But, it is not easy. We do not want to rush anything with him, we want to build it up.”

With the Commonwealth Games in the rearview mirror, it is now time for the Asian Games. “There will be tough competition from Ahmed Bader Magour of Qatar and Chinese Taipei’s Asian record holder Cheng Chao-Tsun.”

Hohn, however, has the 2020 Tokyo Olympics in sight. “We would like to win at the Asian Games, but it is also only a step in the right direction, [the target is the] Olympics.”