Climate finance is the pivotal issue in COP27 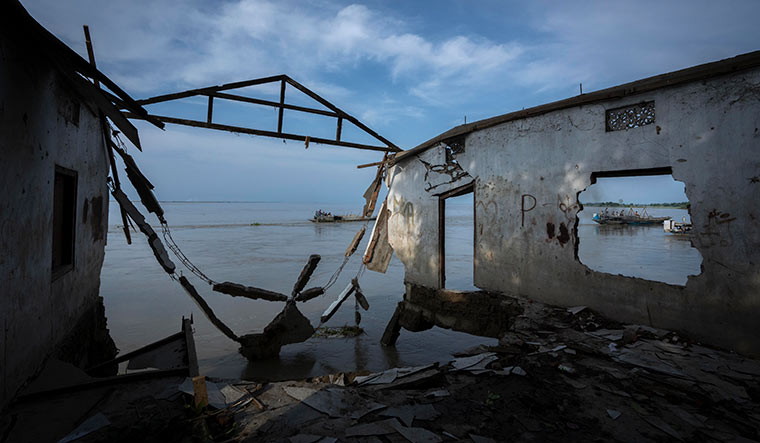 Nature’s fury: A school in Assam, situated near the Brahmaputra, damaged by erosion | AP

INDIA WANTS THE crux of the entire global climate change effort―climate finance―to be addressed at COP27, held in Egypt (November 6-18), which is the biggest jamboree of global climate stakeholders. India feels, and rightly so, that nations must not close an international meeting with just high-sounding words and assurances. The time has come for implementation. Egypt has rightfully named COP27, as the COP of “Implementation”.

India plans to support Egypt with a plan of action that answers the needs of developing countries. The goal of the international meeting is to make nations work towards “faithful, balanced and comprehensive” implementation of the convention and the Paris Agreement, by its principles. The Paris Agreement is a “legally binding” international treaty on climate change. Its goal is to limit global warming to well below 2 degrees Celsius, preferably to 1.5 degrees Celsius, compared with pre-industrial levels.

One of the major stumbling blocks is that even though funds have been flowing purportedly for climate change into developing countries, it is not known where and how the funds are being utilised as there is no agreed definition of climate finance yet. It is here that India would like clarity and a consensus to be built among parties.

As a leader of developing nations, India would like systems evolved so that developing countries can accurately assess the extent of finance flows for climate action. Where is the money coming from? Which area is it being utilised in? There is a need for total transparency on the issue.

It is the developed nations, the biggest polluters, that have shouldered the responsibility of generating funds for global climate change and transferring required technology to developing nations.

According to commitments made by countries on climate finance, nearly $100 billion is to be generated every year towards climate finance. But, unfortunately, the goal is yet to be achieved. As there is no agreed definition of what climate finance is, different estimates are doing the rounds. Work is on in trying to improve the implementation of climate finance targets and scale up the effectiveness of the financing from all sources globally.

Climate finance, from developed to developing countries, increased between 6 per cent and 17 per cent in 2019-2020. The fifth Biennial Assessment and Overview of Climate Finance shows that global climate finance flows were 12 per cent higher in 2019-2020, as compared with the previous biennium, reaching an annual average of $803 billion.

International public climate finance plays a critical role in funding climate change as developing nations are always struggling with challenges due to extreme weather, food, and energy crises, which are a big drain on their economy.

India has asked all countries to join the LiFE movement―Lifestyle for Environment―a pro-people and pro-planet effort that seeks to shift the world from mindless and wasteful consumption of natural resources to their mindful and deliberate utilisation.

India strongly feels that individuals and communities have an important role to play in climate change. By making little changes to their day-to-day behaviour, people can make significant alterations to their environment and climate. According to the United Nations Environment Programme (UNEP), if one billion people, out of the global population of eight billion, opt for environment-friendly behaviours in their daily lives, global carbon emissions could drop by approximately 20 per cent.

How to adapt and bear the loss and damage due to climate change are some of the important issues being discussed at COP27. The existing financial mechanisms have not been able to adequately deliver funds for adaptation and damage due to climate change. They are underfunded and accessing funding is cumbersome and time-consuming. Most of the funding, in fact, is for mitigation. On the anvil will be best practices, new technologies, and new modes of collaboration for technology transfer and capacity building.

At Egypt, a wide range of activities and events will also be held on all aspects of transparency under the banner “Together 4 Transparency”, which will assess the results achieved under greenhouse gas emissions and removals, climate actions, as well as support needed and received from all governments.

There will also be a capacity-building hub where climate change capacity-building organisations, experts, practitioners, and enthusiasts will gather to exchange data and contribute towards enabling greater climate action across the world.

―The writer is an author and a former journalist.