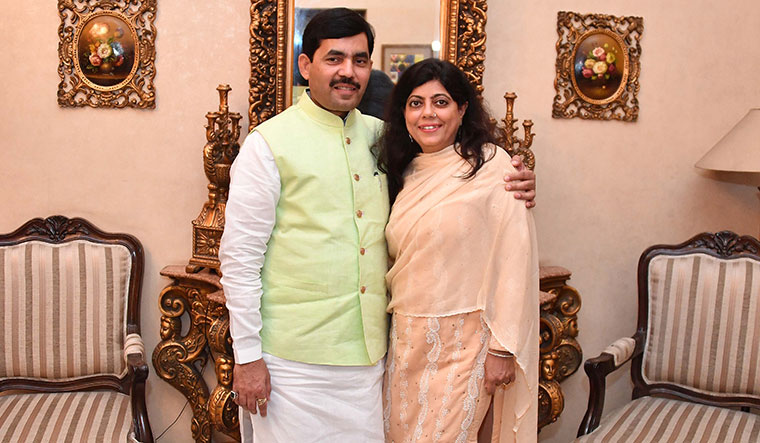 BOY MEETS GIRL IN a Delhi Transport Corporation bus. He falls for her “big, beautiful eyes”. From then on, he takes the same bus daily just to see her. Soon, he starts playing badminton in the alley next to her house and she slowly starts acknowledging his presence. Once, while playing, the boy gets injured and the girl comes running and tears her dupatta to bandage his hand. He proposes marriage; she says yes. But the families object. A friend tries to convince the families. They don’t budge though, and the couple eventually gets married.

The boy in this Bollywood-style love story is BJP leader Syed Shahnawaz Hussain, and the girl is his wife, Renu Sharma. And, the friend in the picture is the firebrand sanyasin Uma Bharti.

“I still remember the bus number—810,” said Shahnawaz, who was the youngest cabinet minister in Atal Bihari Vajpayee’s (1998-2004) government. “I saw a reed thin girl, carrying a huge bag, running towards the bus. She had big, beautiful eyes and it was love at first sight for me.” As he had hoped fervently, the girl came and sat next to him. “She has not left that space ever since,” he said. What attracted Renu, a government school teacher, to him was his caring nature and the fact that he always made her laugh.

Shahnawaz said Renu, a noted Hindi poet, was reluctant for the interview. “She reminded me that our children (Arbaz and Adeeb are doing their bachelor’s in business administration abroad) have grown up and that their friends would tease them saying, ‘Tere papa mummy ka abhi bhi love story chal raha hain (Your parents’ love story is still on).”

Their love grew at its own pace. “Those times were different, unlike the current WhatsApp generation,” said Shahnawaz. “Renu used to write beautiful love letters in English. My English was not so good. So, I used to seek the help of my friends to write back to her.” The first letter he wrote to her was on her birthday, and the second one was to ask her to marry him. “Who would ask such a question in the very second letter? I was shocked,” said Renu. “I told him that I needed more time to think about it.” She made him wait for nine years, before saying yes.

That was the time when the Babri Masjid demolition was rocking Indian politics, and Shahnawaz was the secretary of the BJP’s youth wing. “It was a trying time,” he recalled. “I was in love with both Renu and my party.”

And that is when Uma Bharti came in. “I told Umaji, my mentor, about my love for Renu,” said Shahnawaz. “She assessed that our love for each other was genuine and tried to broker peace between the two families.” When they did not relent, Uma Bharti asked the couple to go ahead.

The couple had a court marriage in 1994. It was only after Adeeb’s birth that the two families came together. Since then, religion has never been an issue in their house.

What do they think about the ‘love jihad’ controversies? “She is still Renu, and I am still Shahnawaz Hussain, and we are still in love. That is what matters,” said Shahnawaz. “Everything else is humbug. I would also add that no third person has any right to intervene between two people who are in love. What has religion got to do with love?”

And, their children will have the same right to choose their partners, they said. The only condition Renu has is that they should marry an Indian. “India is the only country where people belonging to different cultures, religions and traditions live together, even while sticking to their faith,” she said. “This is what makes our country unique. We all must protect it at any cost.”