King and queen of hearts 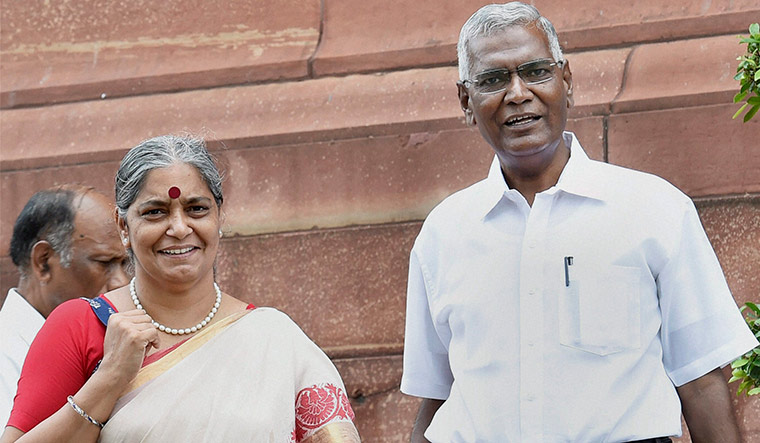 SHE WAS PART of the church choir and dreamt of becoming a nun while growing up in a remote Kerala village. He was the first graduate from his village, a predominantly dalit one, in Tamil Nadu, and dreamt of making the world more equal. Meet D. Raja, the tallest leader of the Communist Party of India, and Annie, the feisty leader of its women’s wing. “Ours is not just an inter-religious marriage; it is inter in every aspect—caste, class, state and language,” said Raja, a member of the Rajya Sabha.

The two met in Kerala when Annie led a women’s march from Kannur to Thiruvananthapuram. Raja, then secretary of the party’s youth wing, had gone there to address the meeting. There were 50 other girls, but Raja had eyes only for Annie. “She was very bold, caring and sensitive to others,” said Raja. Annie, on the other hand, was attracted to his intense reading habits, his analytical mind and his commitment to the cause.

The duo met again before Annie left for Moscow for a course. “I still remember Raja coming to meet me at Coimbatore railway station with a bunch of bananas,” she recalled.

Friends in the party soon started calling them “Raja and Rani”. Raja proposed to Annie while she was in Moscow. But, wasn’t there any opposition from their families? “My mother, though an illiterate, was a great human being,” said Raja. “She was a spiritual person, but rational, too. She fully supported me.” Annie, the only sister to six brothers, did not face much problem from her family, thanks to her father’s communist background. “My mother, a staunch Catholic, did have some issues. But, when everyone else supported, she, too, agreed,” said Annie. The couple, however, faced opposition from unexpected quarters—the Kerala unit of the CPI was reluctant to lose a bright comrade to Tamil Nadu.

The duo got married in Kannur on January 7, 1990, in the presence of senior CPI leaders. They exchanged red garlands, as is the practice in communist weddings, and served just lemonade to those who attended the wedding.

In India, caste could be a bigger issue than religion, but it was not for Annie. “My closest friend in school was a dalit Christian, and many people used to taunt me for that. Their scorn for the dalits only brought me closer to the community,” she said. “Also, black is my favourite colour. It is the strongest of all colours.”

But, moving to Raja’s village—Chithathur in Tiruvannamalai district—did give her a culture shock. “There was not even a toilet,” she said. “But, love gave me the courage to surge ahead. Also, the affection his mother showered on me gave me that extra push. She was an extraordinary woman. My mother-in-law even used to bring beef fry for me, though they had stopped eating beef much earlier.” Raja’s mother told Annie that her son only knew how to read and write and that she should take care of him. And, care she did. “I am what I am today because of Annie,” said Raja.

The couple then moved to Chennai, and later to Delhi. Life was never a cakewalk for them. “I used to work at five different places a day just to support the family,” recalled Annie. Even when the CPI was an ally of the ruling front (United Progressive Alliance), there was little or no change in their lifestyle.

Was religion ever a point of discussion within the family? Sharing an anecdote involving their daughter, Aparajitha, who is doing her PhD in political science at Jawaharlal Nehru University, Raja said, “When Aparajitha was young, people used to ask her whether she was a Hindu or a Christian. She would always reply that she was a normal human being.”

But, what about the controversies surrounding interfaith marriages? “Religion is a very personal thing,” said Annie. “A true believer will have no issue with other religions. Only those who use religion for vested interests create problems.” Raja said, “If we realise that we all are human beings, then we will understand that we are social beings, too—that will resolve all the differences.”