Why archaeologists are ecstatic over a discovery in UP Frozen in time: The 4,000-year-old coffin unearthed from Sanauli in Baghpat | Sanjay Ahlawat

Around four thousand years ago, a man of some military eminence died. He was buried in style, in an elaborate wood coffin inlaid with copper. Beside him, the mourners buried his chariot as well as a torch, his swords and a cunningly crafted shield. Accompanying him in death were his dog and a pet bird.

Sanjay Kumar Manjul is ecstatic. Director of the Institute of Archaeology, Delhi, Manjul points towards the impressions of chariot wheels on tightly packed mud, its copper engravings having developed a patina of green over time. The axle of the chariot is intact, so is the mast, which has been removed and kept aside. “This is a pathbreaking discovery in the entire subcontinent,” says Manjul, mindless of the midsummer sun sending sweat rivulets down his face. “It is the first time ever that we have unearthed a chariot of antiquity, and that, too, from the pre-Iron Age.” Manjul believes the find will force historians to rewrite the history of the subcontinent. The institute is run by the Archaeological Survey of India (ASI).

Manjul and team began working at the site in March, after getting information from Satender Kumar—the owner of the field and pradhan of village Sadiqpur Sanauli in Baghpat district of west Uttar Pradesh—of the possibility of ancient finds. Kumar’s plough had unearthed scraps of copper and shards of pottery. Villagers here know a relic immediately. In 2005, at a field just 120m away, the ASI unearthed a Harappan-era necropolis with 116 skeletons. Some kilometres away, the ASI was working at Barnava, believed to be the Varnavat of the Mahabharat.

Hoping to find evidence of habitation, Manjul began the dig. He soon realised he was unearthing more graves. The disappointment gave way to elation however, when they realised what they had unearthed had no parallel in any other find in the subcontinent. “A chariot!” Manjul exclaims. “The best we have seen were models of chariots, here is an entire one. And, what craftsmanship.”

Beside the dead man was buried his sword | Sanjay Ahlawat

He adds that while Harappan sites show various means of disposing the dead—cremation and burials, nowhere has one come across a such a coffin. The coffin was made of wood, heavily inlaid with copper anthropomorphic motifs—eight faces with headgears on the top, and floral patterns on the sides. The coffin stood on four legs like a table, below which were terracotta and copper pots. The anthropomorphic motifs are unique, nothing similar has been unearthed anywhere so far, says co-director Arvin Manjul.

“Even the impressions of the shroud on the coffin were clear,” says Manjul. He believes this to be a royal funeral site. The dig unearthed eight skeletons; some were secondary burials with just the bones collected together. Another coffin, less elaborate, appears to be of a princess or queen. An armlet of semi-precious stones adorned her left arm, and there were even gold beads near the skull, perhaps hair decoration. Beside the coffin, they found a well-preserved comb made of bone, carved to resemble a peacock. A copper mirror completed the grooming kit. Apart from human remains, the site also had burials of a dog and a bird. They also found partial evidence of another chariot.

The archaeologists estimate the site to be between 2200 to 1800 BC, what is roughly described as late mature Harappan. Yet, the dig has no similarity to anything that is classic Harappan, it is even very different from the nearby necropolis, some layers of which are of the same antiquity. “The find changes many preconceived concepts. This was believed to be the decline of the Harappan period, yet we see such craftsmanship and evidence of a life of luxury. We discovered swords with hilts, which has not been found for this period. Usually, there were antennae swords, which are more basic,” says Arvin. 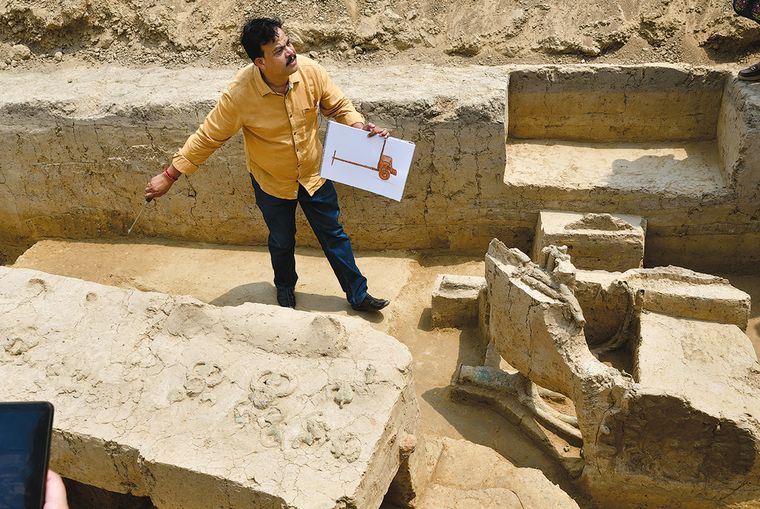 Chariot of yore: S.K. Manjul, director, Institute of Archaeology, with the copper chariot at the Sanauli excavation site | Sanjay Ahlawat

So, who was this “king”? Clearly he was of a martial class, though existing evidence of the Harappans show them to be traders not warriors. So was he of the Indus Valley Civilisation or was he the so-called invading Aryan? As per existing theories, Aryans came much later, if at all they arrived from elsewhere.

And, which animal pulled the chariot? The investigators cannot say for certain whether it was driven by a bull or a horse, but they feel it is more likely the latter. “The design of the chariot is similar to the horse-pulled ones from contemporary Mesopotamia and Greece. We, however, have not found evidence of a horse at the site,” said Manjul, while pointing out the theory that Aryans brought the horse with them, too, was not entirely watertight. “Evidence of horses, including fossils of teeth have been found at other Harappan sites,” he notes.

The investigators are careful not to arrive at any hasty conclusions. At a time when it is believed that history is being given a certain tilt to suit political causes, finds like these make sceptics raise eyebrows. The nearby dig at Barnava revealed Painted Grey Ware pottery, which is associated with many sites mentioned in the Mahabharat, like Hastinapur. So was Barnava the legendary Varnavat, of the lac house fame, where the Pandavas once lived? “All we can say is that the Barnava site is contemporary to the one at Hastinapur,” says researcher Disha Ahluwalia, who worked at both the digs. Manjul urges, “We have just unearthed a unique find. It needs a lot more study, beginning with carbon dating. We have not even ascertained the age or cause of deaths. Let us not jump to conclusions prematurely.” He is careful in not associating this find with any civilisation, Harappan or otherwise. “I would rather call it contemporary to the late mature phase of Harappan,” he says.The Barnava relics are at least 500 years younger than the one at Sanauli.

Amit Pathak, a doctor-cum-historian, who is researching at the United Services Institute in New Delhi, says that there is so much more to unearth in India. “No important digs were done after the 1950s, when B.P. Lal made his findings. Only after 2005 has the ASI stepped up excavations and digs. The more we unearth, the more we learn that the linear ideas of the West—the Harappan were indigenous, after their decline, there was a dark age and then the Aryans invaded—are not all that correct. This find is supposed to be from that supposed dark age, yet its revelations are anything but dark.”

The Ganga Yamuna doab is fertile, and has been constantly inhabited. In fact, at most sites, various layers of the digs reveal various time periods of human habitations. The archaeologists are certain that the fields of maize and wheat around this site are over an ancient habitation. Once that habitation comes to view, perhaps we would know a little more about the life and times of these people.... Now, that calls for some serious digging around.