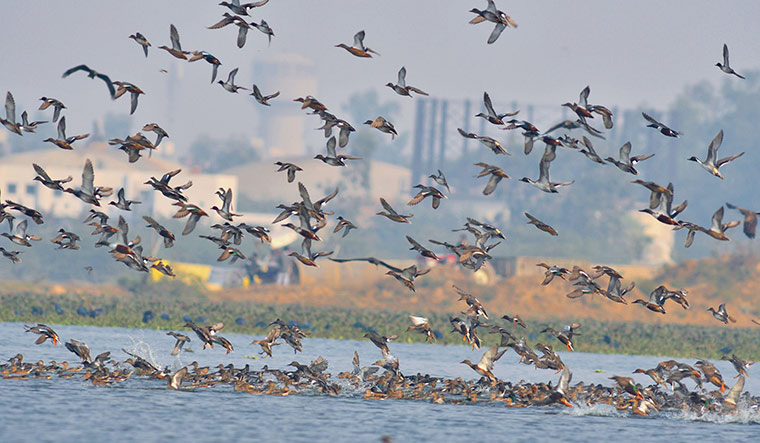 A recent wetland survey—conducted by the Haryana government, under court direction—did not list the 250-acre Basai wetlands as one among 51 others in the state. According to Muncipal Corporation of Gurugram’s (MCG) master plan, Basai village and the land around it are prime real estate land, just adjacent to the upcoming Dwarka Expressway.

Even the National Green Tribunal (NGT) deemed that there was no evidence of wetlands in Basai, and it vacated a six-month stay on the construction and demolition waste management plant that is to come up on 3.5 acres of the wetlands. Birders across Delhi, Noida and Gurgaon—who had petitioned the Green court, saying the loud plant will disturb winged visitors and destroy their habitat—are now livid after the NGT order.

This birding destination in the National Capital Region (NCR) had charmingly managed to steal the neighbouring Sultanpur Bird Sanctuary’s thunder, and, probably, some of its rarest birds, too. The International Union of Conservation of Nature (IUCN), indicated Basai to be home to two critically endangered birds—the white-rumped vulture and red-headed vulture.

An unofficial bird count by the Delhi Birding Forum, conducted in May 2017, indicated that the wetlands were home to 282 species of birds—with the numbers crossing 2 million, in 200 acres. “Three extremely rare species of birds were spotted here this winter,” said Pankaj Gupta of Delhi Birds Forum, and a petitioner to NGT seeking to save the Basai wetlands.

According to him, among the thousands of migratory guests coming from as far as Europe and Siberia are migratory eagles, harriers, cranes, songbirds, ducks and geese, waders like sandpipers, godwits, stints, snipes and plovers. “The MCG authorities say that Basai is a barren land where water-logging happens in rainy season and some birds visit in winter,” said Gupta, who had moved court citing a ‘mistake’ on the MCG’s part, in selecting a wetland to build a construction-waste management plant. In September 2017, the government introduced amendments to the Wetlands (Conservation and Management) Rules 2010, diluting the original rules. The Supreme Court had earlier reprimanded the Central government for not doing anything to protect India’s wetlands. Environmentalists estimate that a third of all wetlands in India have already died.

Basai wetlands had been served a death sentence by the Haryana government, and on January 10, it received its latest one from the NGT. The wetland now awaits its eventual death. And, the rumble of trucks will replace birdsongs.