Why November is a month of uncertainty in Pakistan 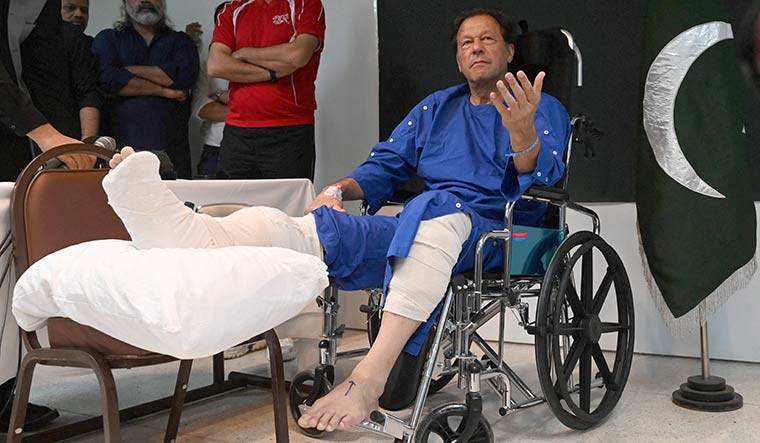 Narrow escape: Imran Khan at a hospital in Lahore on November 4, a day after an assassination attempt on him | AFP

ON NOVEMBER 3, Pakistan Tehreek-e-Insaf (PTI) chairman Imran Khan survived an assassination attempt in Wazirabad, Punjab. The former prime minister was leading a long march to Islamabad, demanding early elections. Khan named three people as conspirators: Prime Minister Shehbaz Sharif, Interior Minister Rana Sanaullah (both from the Pakistan Muslim League-Nawaz) and a senior intelligence agency official, Major General Faisal Naseer. Sharif dismissed Khan’s allegations and requested the chief justice of Pakistan to form a full court commission to investigate the attack. The Inter-Services Public Relations, too, rejected the “baseless and irresponsible allegations…against the institution and particularly a senior army officer”. It took four days to register an FIR in Punjab, a province ruled by the PTI and the Pakistan Muslim League-Quaid e Azam (PML-Q), its ally. The PTI rejected the FIR that named only the assailant caught on site, saying it does not believe that it was the work of a lone shooter.

Despite the successful vote of no-confidence against his government in the National Assembly this April, Khan continues to be very popular. His party won most of the by-elections held across the country. PTI leader Fawad Chaudhry, who was on the container with Khan when he was shot at, told THE WEEK that had the assassination taken place, the ensuing chaos would have weakened Pakistan. There are two realities in Pakistan whether one likes it or not, he said. “One is the military and [two] Imran Khan. Both of them are national forces,” said Chaudhry. “There is a perception now that the military is trying to ‘limit’Khan. This has created chaos in Pakistan’s politics now. It is a huge problem and needs to be resolved.”

All eyes, no wonder, are on the appointment of the new army chief, due later this month. While he is not sure how that will impact Pakistan’s politics, Chaudhry did say that “the present character of the military certainly needs to change”.

Pakistan Peoples Party (PPP) leader Farhatullah Babar said that the attack on Khan was too serious to be ignored and called for a thorough, independent investigation. “The attack has already increased political temperature, polarisation, tensions and instability,” he said. “Ignoring it means more of all this for Pakistan.” However, it would not result in early elections, he said. What might happen sooner than planned is the appointment of the new army chief. “This indeed is a measure of the fragility of civilian and democratic structures that the nation is on tenterhooks because of one senior appointment outside Islamabad,” he said. “At least, this is the perception. Incentives for the government to announce the new appointment sooner than planned are likely to increase.”

Would the attack have any impact on the coalition government, which includes the PPP? Babar said that Khan had upped the ante particularly after addressing a formal letter to the president, asking him to rein in state agencies and security organisations. “A formal communication by an ex-PM to a sitting president has implications,” he said. “The Pakistan Democratic Movement [the coalition government] will have to develop a calibrated narrative to counter it. However, the government [being] under pressure on this score doesn’t mean it is under threat.”

Senior leader of the Pakistan Muslim League-Nawaz and Defence Minister Khawaja Asif condemned the attack on Khan and said it was “deplorable”. Asif told THE WEEK that this sort of trend in our politics will lead us nowhere. “It will bring disastrous results,” he said. On the political impact of this attack, Asif said that if it was done to trigger some sort of reaction, that has not happened. “Imran Khan has a large following and those followers are definitely disturbed and people like us are also disturbed because of this trend―the trend of extremist politics and preaching extremism, calling for violence. This sort of trend creates imbalances in society and creates uncertainty and chaos, which is very unfortunate. It is the responsibility of the politicians to reverse this trend so that such incidents do not happen in the future.” 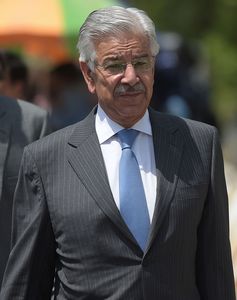 Though the Shehbaz Sharif government is against early polls, the current political instability is unsustainable, said senior journalist Amir Zia. A practical way out of the crisis, he suggested, was to install a caretaker government that can hold fresh elections by March or April 2023. “If by holding polls a few months earlier, Pakistan can end the crisis, it will be a good bargain for all,” he said. “With the change of command in the military leadership later this month, there will be an opportunity to find a middle ground.”

According to Zia, the “new Army chief would be distancing himself from General [Qamar Javed] Bajwa’s policies, which his critics say has made Pakistan’s most powerful institution unnecessarily controversial”. “The army needs to stick to its traditional role, including carrying the cross of the anti-corruption narrative,” he said. “Ensuring fair elections and even-handed accountability would help restore the army’s image. This institution must not be seen as the sponsor and protector of the corrupt.”

Early polls are highly unlikely, said journalist Rabeea Khan. “At least not in the near future as Khan has been asking for,” she said. She cited a few reasons―one being the government not wanting to look weak by giving in to Khan’s demands. “The current government has been in power for almost six months and, during this time, it has taken some tough economic decisions, which are believed to be unpopular,” she said. “The major one being reviving the International Monetary Fund programme, which comes with harsh conditions. Therefore, now there is a strong consensus that the government should take enough time to revive the economy and regain the confidence of its supporters before going for general elections.”

Another reason Rabeea cited was that the real motive of Khan was to influence the November appointment of the new army chief. “Whatever pressure he is able to build through his long march or after his attack is primarily to tilt things in his favour regarding the November appointment, and not exactly for an early election,” she said. Moreover, Pakistan does not have the capacity or resources to hold elections following the devastation caused by the flash floods, said Rabeea.

Pakistan has been in a continuous grip of political crises for the last several months, observed former senator Mustafa Nawaz Khokhar. “This crises has led to a deteriorating economy and has made the life of the common man difficult,” he said. “In this polarised environment, one can only hope that all stakeholders sit together and find ways not only to resolve the current crisis but ensure that something like this does not repeat itself.”

While Khokhar wondered why an army chief’s appointment should hold the whole country hostage, journalist Zebunnisa Burki said that it all comes down to one question: who will be the next army chief? Will it be General Bajwa again (with an extension)? Or, will it be someone of his choice or Nawaz Sharif’s? “Does the PDM government even have a say in the matter, given the crises it is staring at ever since it took power,” asked Burki. “There is also the constant presence of an agitational Imran who seems to forever go from strength to strength despite any and all setbacks. There are open murmurs that Imran’s popularity can (it has already done so in some instances) easily break the PML-N’s Punjab stronghold. The costs of the vote of no-confidence just seem far too great for the current coalition government―unless the [army chief’s] appointment goes in a direction Imran would not wish.”