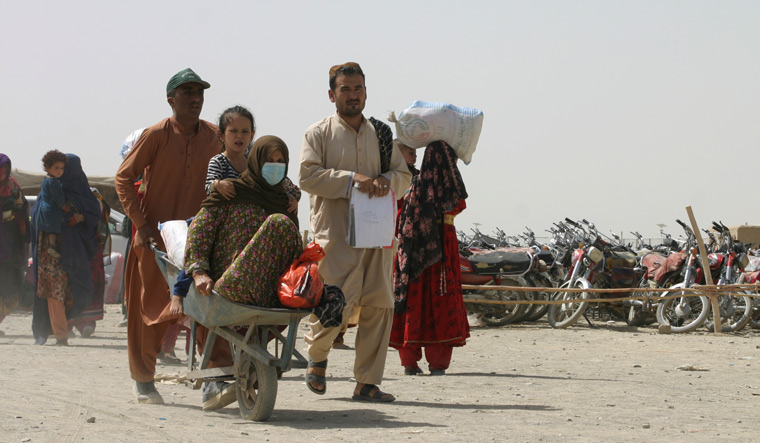 Seeking safety: An Afghan family crosses into Pakistan at the ‘Friendship Gate’ crossing point, in the border town of Chaman | Reuters

Nazeema studied in India, but she went back to Afghanistan, to work for women. Since the Taliban has taken over, she knows it is a matter of time before there is a knock at her door. “Everyone is at risk,’’ she says. “Especially women like me.” The complexion of the current government—17 of the 33 cabinet members are on the UN sanctions list—does not hold out much hope.

Nazeema’s story is by no means the exception. The UN estimates that half a million refugees will flee Afghanistan by the end of the year. Last year, nearly 14.3 lakh Afghans crossed over to Pakistan, while Iran provided shelter to 7.8 lakh. India, by comparison, admitted only 8,275 refugees.

With the Taliban taking over, there is an attempt to stop people from fleeing. Pakistan and Iran have indicated that they will not be taking any more refugees. “It is going to be much more difficult for Afghans looking to travel beyond their borders, looking for safety,’’ says Kabir Taneja of the Observer Research Foundation. “The Taliban will push Afghans back from the Iran border so as to not upset Tehran. Turkey already hosts more than two million Syrian refugees. Pakistan is an option for southern Afghans, but those who would feel safe there are very few.’’

There are also an estimated 3.5 million internally displaced Afghans who are forced to flee their homes. But more than just the refugee crisis, Afghanistan is also facing a looming humanitarian crisis. The government has practically no money. As winter approaches, 80 per cent of the Afghans will need shelter, and the food shortage is real.

The World Bank has frozen aid after the Taliban took over. “Nearly 80 per cent of Afghanistan’s budget came through international aid,’’ says Taneja. “But the west did not design any long-term economic plan. There is going to be an immense loss to the Afghan exchequer.”

The UN Office for the Coordination of Humanitarian Affairs says nearly $606 million is needed immediately. Doctors have not been paid for months. The World Health Organisation says 90 per cent of its clinics will be shut soon. “Countries in the west can and should use their influence with the Taliban to ensure that it cooperates with aid groups,’’ says Michael Kugelman, deputy director of the Asia Program at the Wilson Center, Washington, DC. “The west has an obligation to do this, given that sanctions will add to the misery of the people.”

But it may not be easy. “The new Taliban government is led by the Pashtuns, ignoring other demographics, and has no women representation, making it difficult for Europe to justify aid beyond a point,’’ says Taneja. The US, however, has assured that it will continue to provide assistance despite the sanctions.

Can India find a way to step in and make a difference? India has offered to help the Afghans when the country was under Taliban rule in the past. Providing humanitarian aid could help India keep alive its “winning hearts and mind” agenda.